So, I had my first dirt bomb last summer at Bantam Bread Company in Bantam, CT. To the uninitiated, a dirt bomb is a nutmeg-infused muffin that, still warm from the oven, is plunged into melted butter and then tossed in cinnamon sugar until generously coated. Delish-sounding, no? However, the thing that is really totally brilliant about dirt bombs is that the butter and sugar transforms them from very nice, ho-hum-ish spiced muffins, into – basically one of my most favorite foods — doughnuts.

At the Bantam Bread Co., dirt bombs are big-ish (standard muffin-sized), which I actually love, as I tend to be the one pointing at the largest croissant or chocolate chip cookie in the display case when purchasing sweets. But when developing my own dirt bomb recipe, I thought it might be fun to make dirt bomb doughnut holes by using a mini muffin pan. It totally worked, as the dirt bombs end up looking like round little balls, with no mini muffin-top in sight. And the ratio of the transformative coating to muffin is perfect. 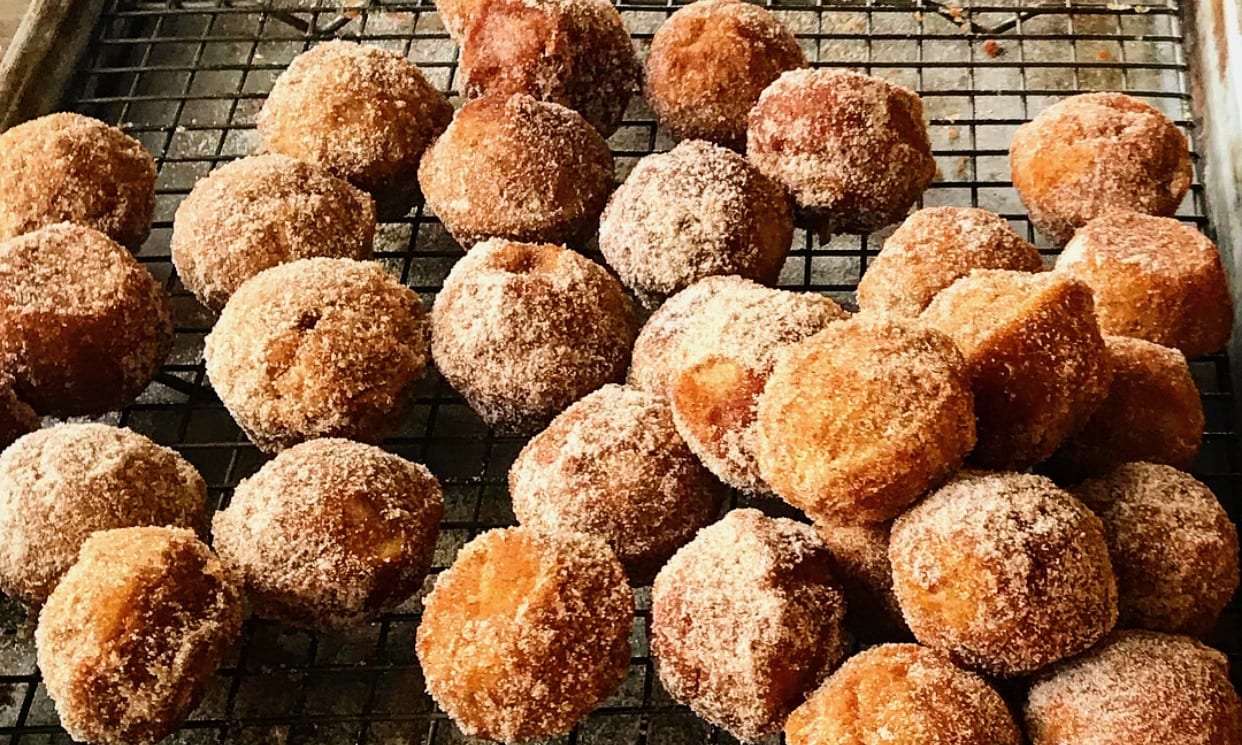 My dirt bomb internet/cookbook research revealed another dirt bomb (other than the Bantam Bread Co. one), hailing from Cottage Street Bakery in Orleans, MA, and several “cinnamon sugar baked doughnut” recipes (Ina Garten has one, among others). I tweaked a bit, substituting oil for the butter, dark brown sugar for the white, buttermilk for the milk and ramping the nutmeg way up. (Don’t be scared, but my recipe calls for two whole nutmegs grated . . . Sorry, but I was feeling the need for a spicier muffin, and when researching “nutmeg muffins,” discovered a recipe for one in my copy of Marion Cunningham’s breakfast book that called for one and a half nutmegs, and for better or worse, I felt that gave me liberty to ask for two in my recipe).

My recipe follows and I’d say it’s pretty foolproof. (I made it about 100x as I wasn’t happy with the crumb – seemed kind of tunnel-y to me – which is probably a result of substituting the oil for the butter). Anyway, enjoy! They really are tasty.

Thanks for subscribing! Please check your inbox to confirm your subscription.
Breakfast Cinnamon

How many does the recipe make?

oops – sorry about that. my mini muffin pan makes 24 muffins and i refilled my pan about 3 times, give or take. bottom line: yield is about 72 mini muffins.

Wow, that’s a lot of nutmeg!

Hi. Can they be fried? Cos my ovens bombed out. Thnx

Yes! But the dough would
Probably need to be refrigerated. Maybe make these: https://www.jessiesheehanbakes.com/2014/07/03/buttermilk-bar-doughnuts/