Chocolate chip cookies. Basically, completely one of my favorite sweet treats, if not one of my favorite overall food items. A mere photograph of particularly delicious looking ones and I’m somewhat overcome. And, yes, I’m aware that I am not the first person to have this reaction, and that the penultimate chocolate chip cookie is blogged about ad nauseam, which is reason enough — duh — for me leave well enough alone. However, in this instance, I’m throwing caution to the wind/I just really want to share my chocolate chip cookie musings/recipe with you. 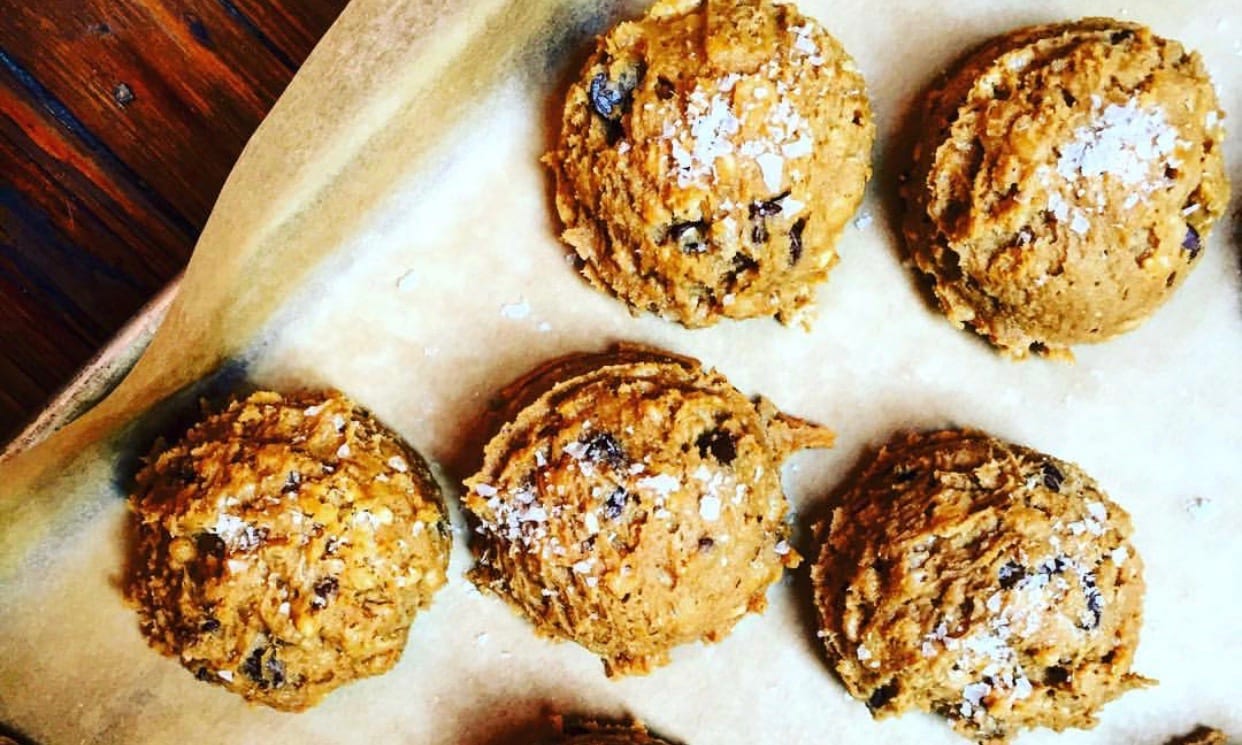 So, I am not one of those people who grew up in the kitchen at my mother’s apron strings, ceremoniously taking the mixing bowl from her at the tender age of 5 (or even 35) and revealing some innate pastry skills. My deep appreciation of sweets, however, did indeed exist from a young age and chocolate chip cookies were my first love. Both my grandmother and father made them, each using the Toll House recipe, but creating completely different cookies. My grandmother’s were tiny and perfectly shaped and very crispy, and my father’s were a bit more traditional looking, a little lumpy and somewhat cakey. I have super strong food memories of both. 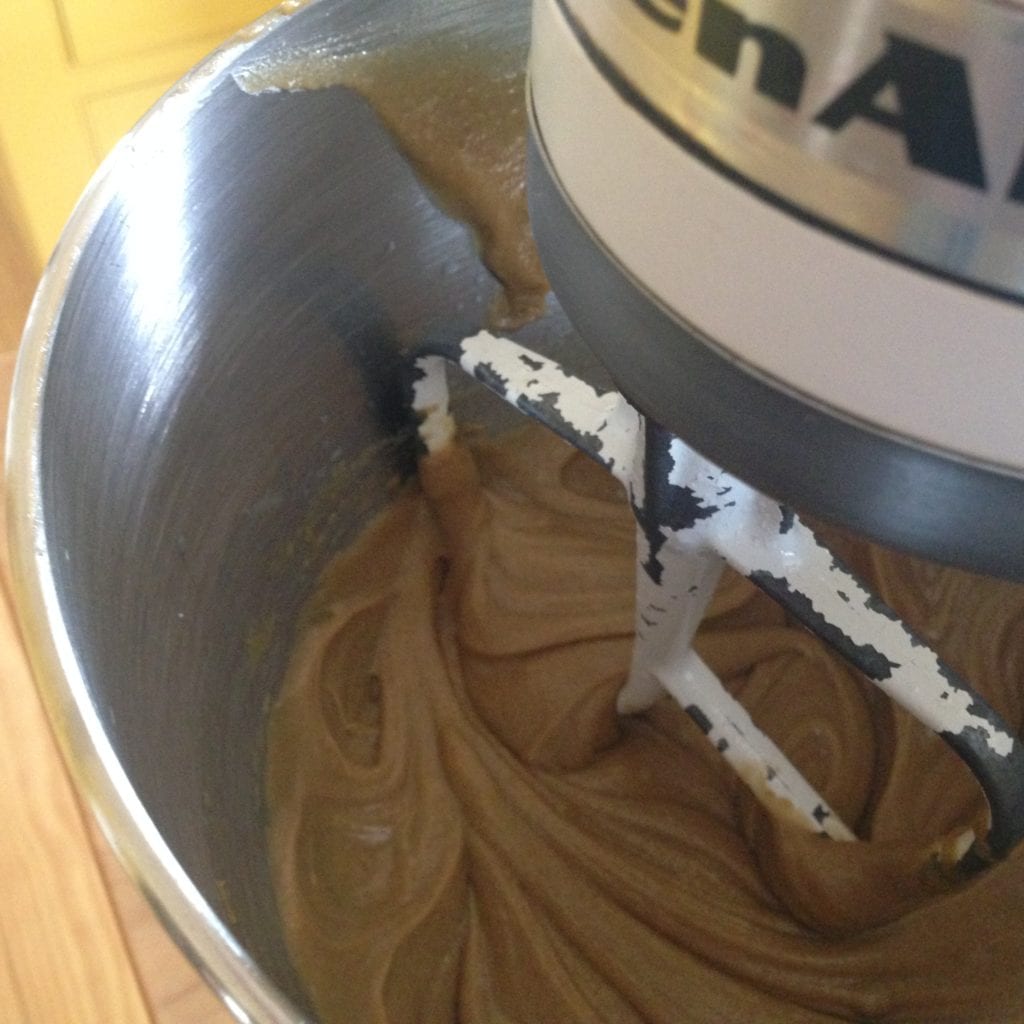 However, once old enough to purchase my own cookies (it took a long time before I actually thought about baking them from scratch — weird, I know), I realized that it was not a crispy or cakey chocolate chip cookie I coveted, but a thick and chewy one. And that brought me to Levain Bakery, where I ate probably one of the best chocolate chip cookies I’ve ever had (love them as I do, however, my recipe is not an attempt to replicate their’s, but if that’s what you’re after, by all means check out Parsley Sage Sweet or Brown Eyed Baker). And that’s sort of how it breaks down. People either like crispy ones, cakey ones or thick and chewy ones, as Amanda Hesser’s legendary (at least in my world) article/recipes in the New York Times Magazine spelled out. 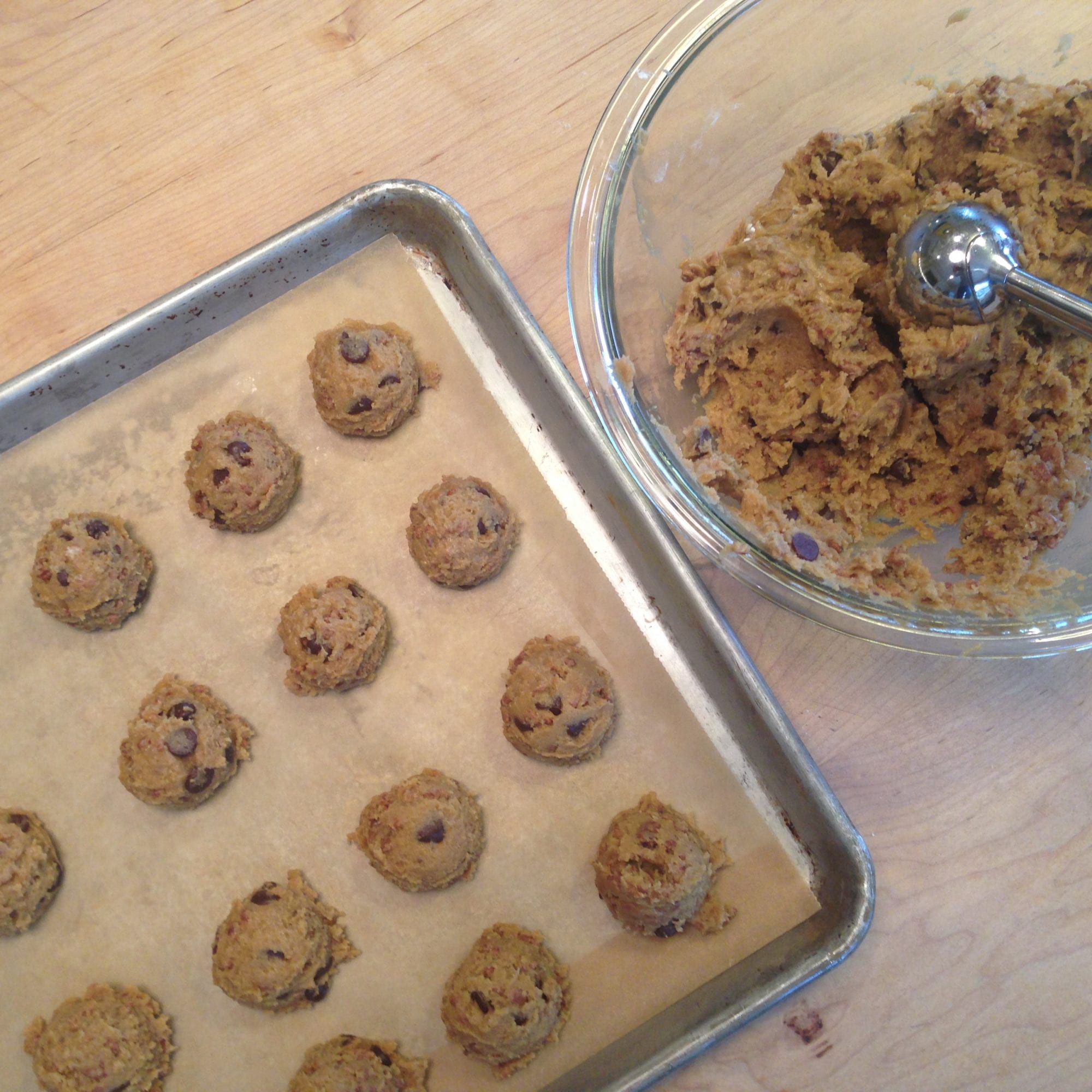 Anyway, the culinary path I took to get to my own thick and chewy cookie began with the recipe for thick and chewy chocolate chip cookies in Baking Illustrated (where many thick and chewy obsessives are apt to start). There, I learned several of the golden rules for achieving chewiness (melting the butter, substituting yolks for whole eggs, adding more brown sugar than white — these rules, and others, were revisited and precisely unpacked, as is the Cook’s Illustrated way). When I began working at Baked NYC, I learned yet another golden rule: Cookies must be refrigerated for at least 24 hours prior to baking (Shirley Corriher taught me this as well, in Bakewise). From her, I learned yet another chewiness tip (substituting bread flour for all-purpose). 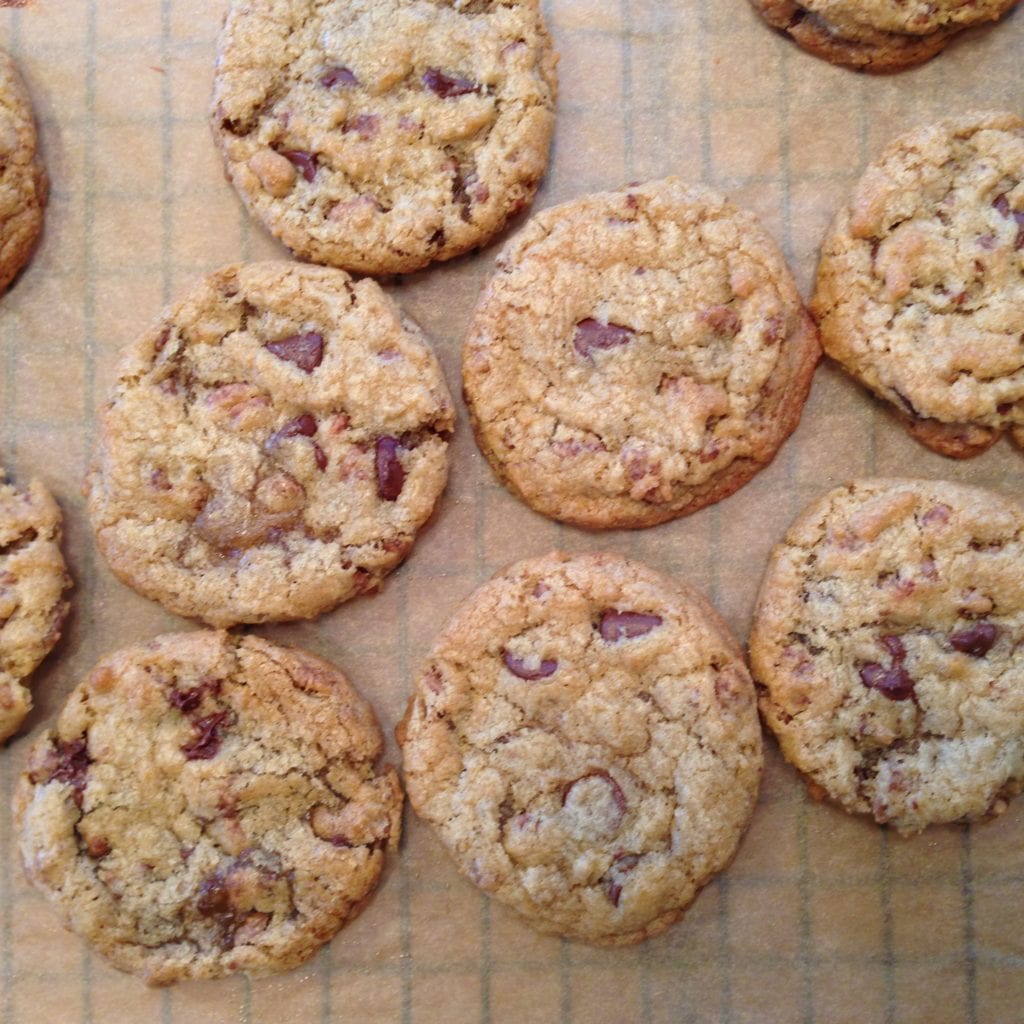 With these rules in mind, I developed my own recipe, tweaking as I went. I used all bread flour (as opposed to a combo of flours), added extra salt (salt-aholics do things like that), extra yolks, extra vanilla and a splash of cream (full disclosure: not exactly sure what role the cream plays in the chewiness pursuit, but I’ve always done it), substituted dark brown sugar for the light brown, tossed in fewer chips (a sacrilege, i know), and — here’s where I may lose some of you, but try to bear with me — some Cocoa Krispies. Bizarre, I admit, but the puffed cereal adds a textural chewiness that is really special. And, honestly, the first time I made these cookies with a puffed cereal, I added Rice Krispies and depleted my stash. Out of desperation, I used Cocoa Krispies the next time (happened to have some leftover from a Rice Krispies treat I’d been developing) and was pleasantly surprised. Long story short, either puffed cereal works, with not a ton of difference in flavor. As I have stated before on this blog, I prefer big-ish sweets and HIGHLY recommend using a 1/4 cup scoop to make jumbo-sized cookies, resulting in 17 to 18 cookies. (Check out Maury Rubin’s take on why big produces a superior cookie — he is not wrong.) 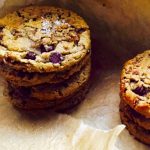 Question for you – I’d love to make this recipe next time I’m baking with my daughter, but would you consider providing weights for flour and sugar etc.? It makes baking *so* much easier! I’d also love it if the Baked cookbooks did the same – thanks 🙂

so glad you’d like to try making these! and i totally agree re: scaling/weighing your ingredients – it absolutely makes things easier – and my book on icebox cakes (which is coming out in a year) includes recipes in both volume (cups, etc.) and weight measurements for just that reason. for my chewy chocolate chip cookie recipe, i actually have the flour and sugars scaled, and will modify the recipe to include them.

Jessie, thank you! So responsive of you! I look forward to your cookbook..

Now if you could convince the Baked guys…!

my pleasure! please let me know how the cookies turn out. and i promise to work on matt and nato . . .

One last (annoying) comment – I prefer my cookies on the smaller/medium chunkier side – so probably around 1.5 T – would you still bake them for 10-12 minutes? Thanks 🙂 Hoping to make these Sunday am!

No!! I would check them after 8 and maybe go til 9 or 10, just until they’re starting to brown (and no longer look raw). But as I mentioned in the post, I really believe one of the secrets to extra delicious (chewy) cookies is under-baking slightly . . .