So, the whole buttermilk bar doughnuts thing started when I was having dinner with friends and they mentioned a doughnut they had eaten in Los Angeles. A mere mention, and I was instantly smitten. And not with the doughnut’s purported attributes (which I insisted they share with me), but with the name of the doughnut: BUTTERMILK BAR. Brilliant. Who doesn’t want to eat buttermilk bar doughnuts?? 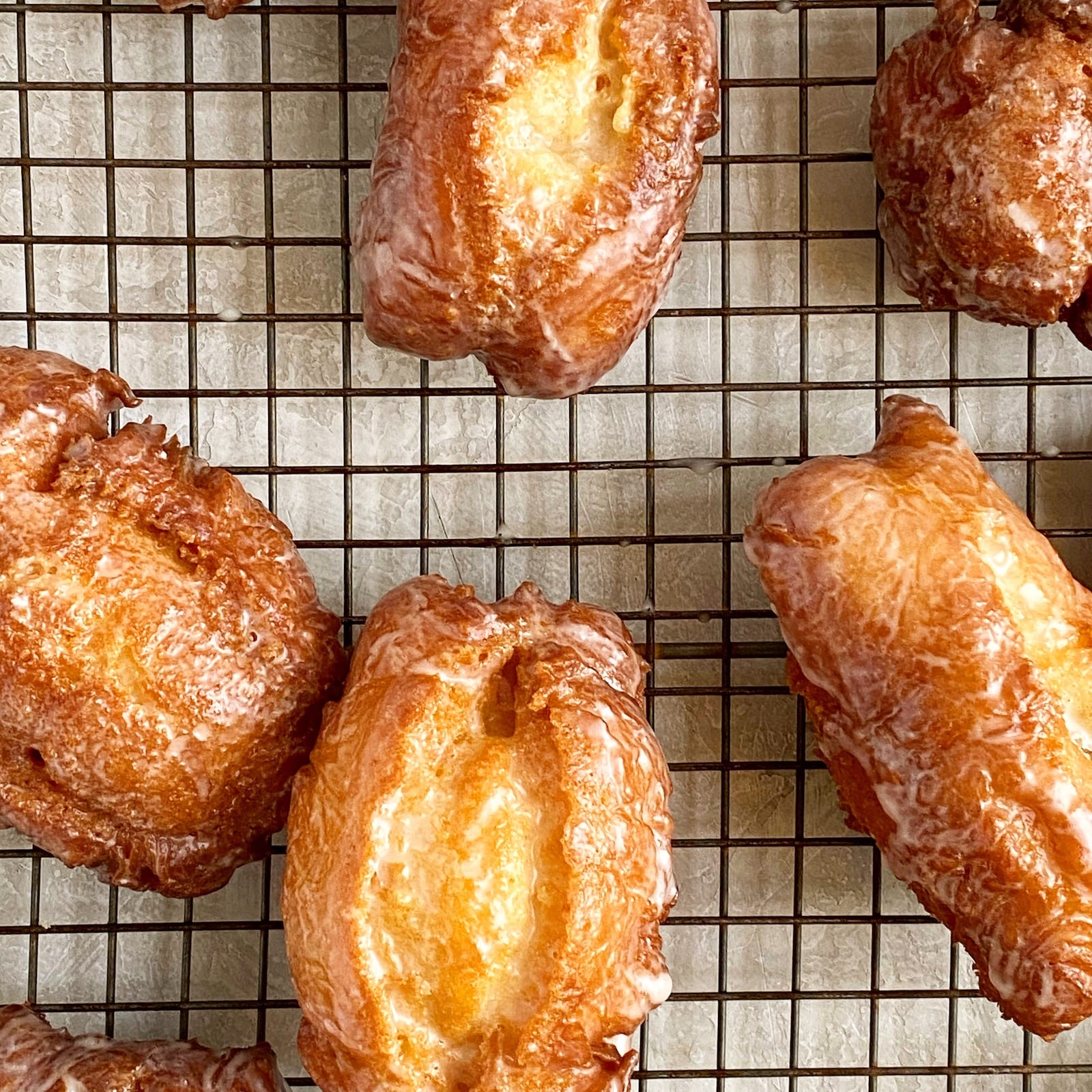 Being a doughnut obsessive (as documented in my doughnut hole recipe), the googling began later that night. However, save for a few images, an ancient request for a buttermilk bar recipe from Yahoo Answers (am I the only weirdo who actually reads those things?), a YouTube video on how to make them in a professional kitchen (which proved somewhat helpful, actually) and an article from a Portland, Oregon newspaper about where to purchase them, I came up empty-handed in the buttermilk bar recipe department. Concluding that a buttermilk bar was probably nothing more than a buttermilk doughnut in a bar-shape anyway, I turned to my cookbooks and magazines to suss out just what went into the ultimate buttermilk bar doughnuts. 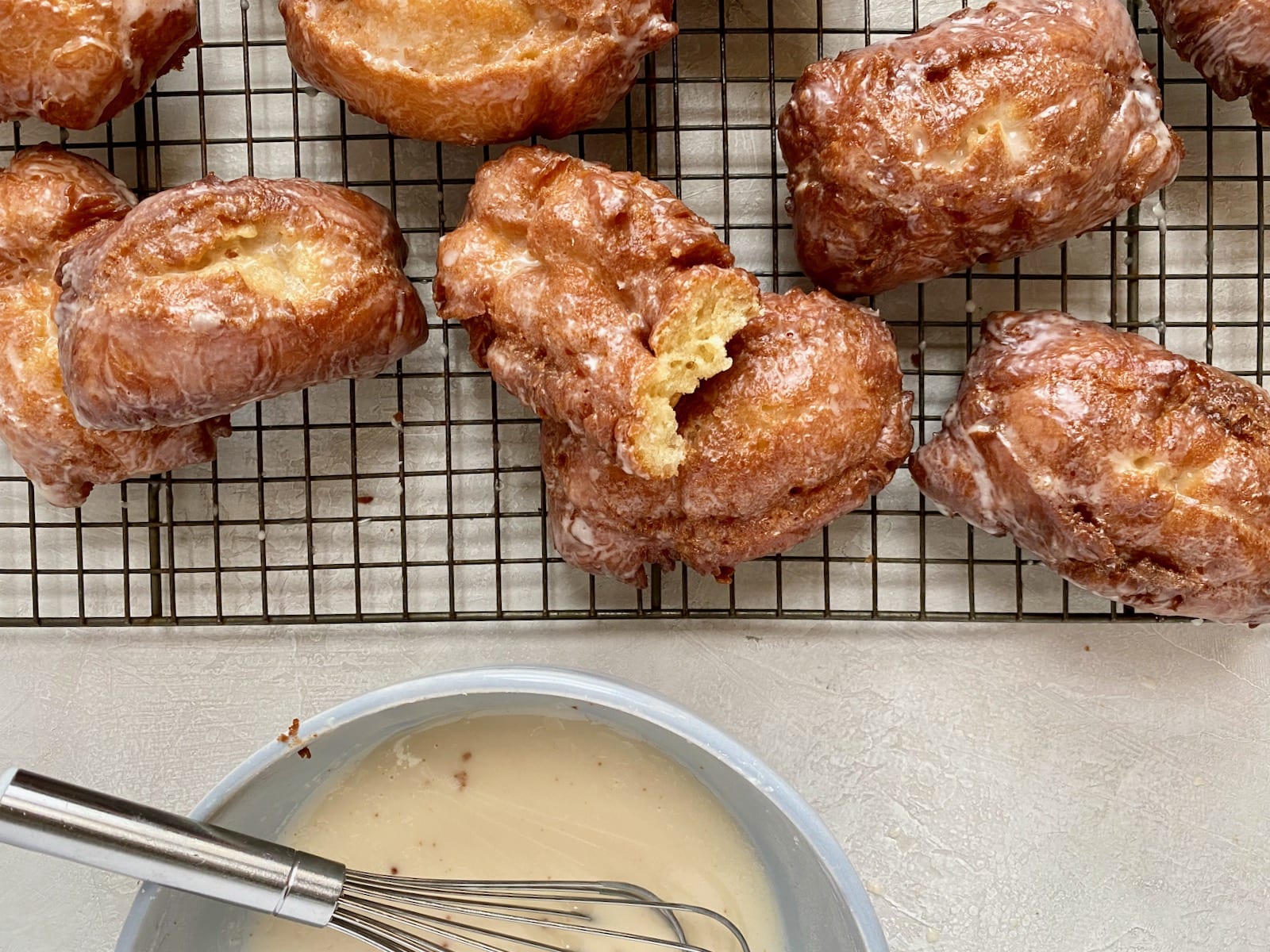 From Baking Illustrated I learned about the addition of yolks — my recipe calls for 4 — making for a moister dough and more tender doughnut, from Karen Demasco’s Craft of Baking, I learned about the importance of cake flour (the crumb of a “cake” doughnut — one made without yeast — benefits from cake flour), from Marion Cunningham’s Breakfast Book, I adopted a foolproof mixing method and shortening as an ingredient (and not just as a frying oil), and I learned a lot from Saveur’s issue about the world’s best donuts. Culling from the above recipes, I developed mine — removing spices (like nutmeg and cinnamon), adding extra salt and melted butter, along with the shortening, as well as a whopping two tablespoons of vanilla paste and just a tad more leavening than one might think . . . In short, a recipe that produces a spectacular, tender crumbed, vanilla-infused, craggly-topped buttermilk bar doughnut. 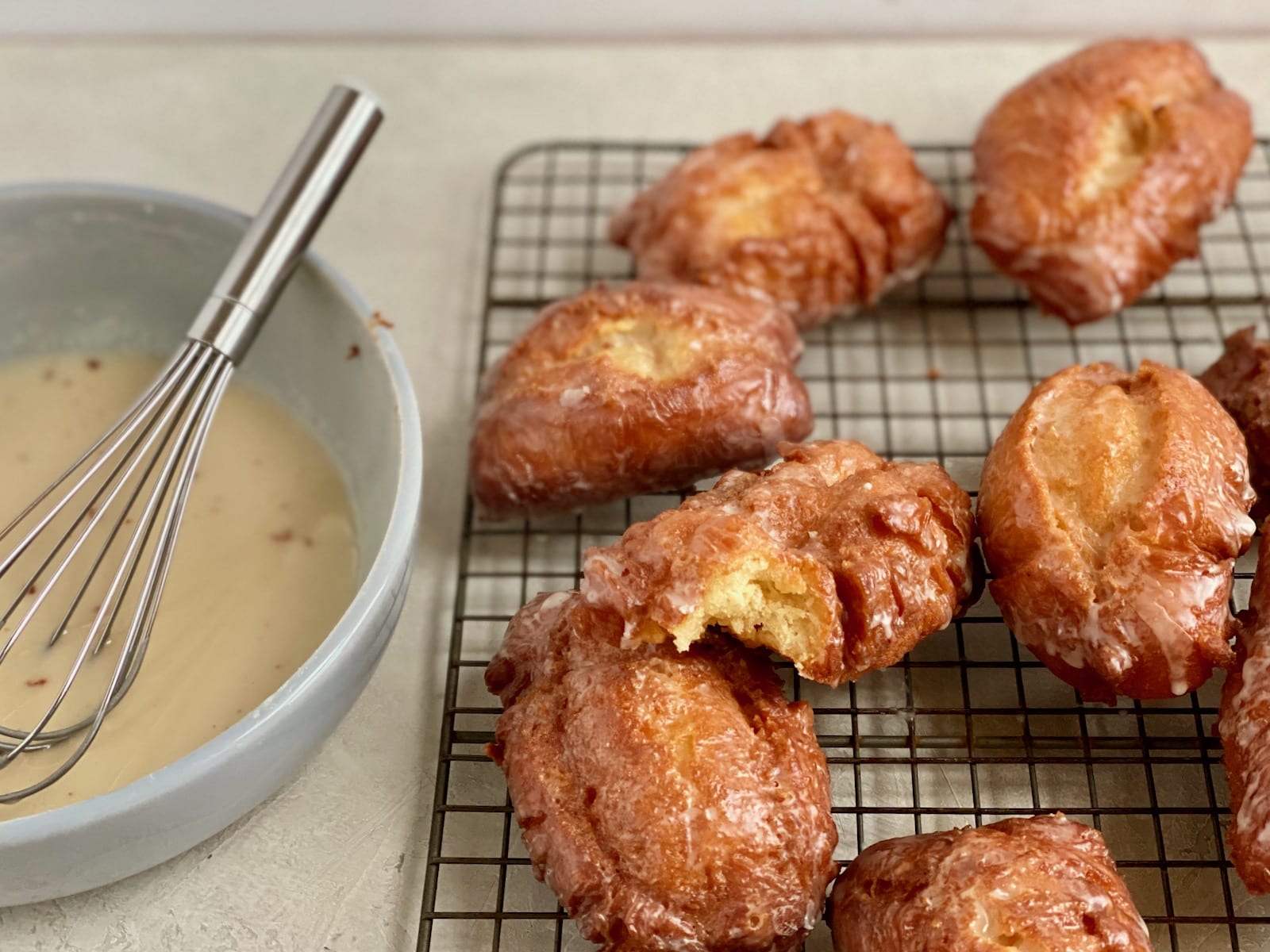 However, the thing about making doughnuts is that the recipe is really only half the battle: How one fries one’s doughnuts is the other half. And for frying technique I looked to Smitten Kitchen and The Pioneer Woman, where I learned about the importance/necessity of using shortening as one’s frying oil and the secret to non-greasy doughnuts (paper towels), respectively. Through trial and error on my own (i.e., after frying more than a dozen batches of these tasty treats) I realized that a slightly lower temp of 350 degrees worked best, as well as a frying time of about one to two minutes per side.As to the question of size, traditional buttermilk bars (those found in doughnut shops in LA and Portland) are quite large. However, I found frying very large doughnuts (5″ by 2″ by 1″) close to impossible without (I’m assuming) a commercial fryer (though perhaps an air fryer would do the trick. Here is a review from Kitchenistic of some good ones)*.

Instead, I made my bars about 3 1/2″ by 1 1/2″ by 1/2″ (and some even smaller) and they were just about perfectly sized. And, finally, the question of whether to glaze or not to glaze (I like both) but found that glazed ones still tasted amazing the next day, whereas unglazed ones, not so much. Thus, I recommend glazing half and consuming the other half the day they are baked (not really all that hard to do . . .). The recipe can be found here.

*I was compensated for including this link, though if I was in the market for an air fryer, all of the ones mentioned in the review look excellent.

Thanks for subscribing! Please check your inbox to confirm your subscription.
Bread, Rolls, Doughnuts & Puffs Breakfast

This recipe rocked! Very easy to follow and the glaze is out of this world! Thank you!!

Yay!! So happy to hear that.

Thank you so much for the time and effort you put into this. I moved to the east coast from Portland Or. and am originally from Los Angeles. Imagine my dismay when I realized the Buttermilk Bars are a foriegn concept to these people here 🙂 I have missed them so.

I grew up in Norcal and miss them as well.. There are a few spots in the PNW that sell them. If you are ever in Canon Beach the bakery there has them. But my favorite one was on Friday Harbor where they had all of the Maple and Chocolate Icings. However that is a long drive or ferry ride for a buttermilk bar so I’m looking forward to trying this recipe!

Love hearing this. Hope you will give them a try.

Oh my gosh, THANK YOU SO MUCH for taking the time to create this recipe! I live in Idaho, and finding a fresh buttermilk bar is almost impossible! I’ve tried this recipe twice, and it works beautifully! My husband and children also thank you! ?

yay!! so happy to hear this. you are all SO welcome.

Looking forward to giving this recipe a try. Although I prefer my buttermilk bars plain or with chocolate. Glazing simply sets my teeth on edge. Always enjoyed them from Chuck’s Donuts in the Bay Area decades ago. In the Spokane area, they only occasionally surface, and then are not the best examples. Closest good ones I’ve found is Portland, which is a long way to go for a snack.

glad to hear you may try the recipe! i kind of agree re: glaze – but like to give it as an option – and i love the way it looks . . . i have never seen buttermilk bars on the east coast, but look forward to one day trying them on the west . . .

I’m making these now and don’t have enough shortening to fry them. What difference in the outcome of the doughnut does frying oil instead of shortening have? (Need to know if I absolutely MUST send my husband to the store or will they still turn out tasty just not as tasty)

hi angela! so sorry to just be seeing this now: crisco is nice because the doughnuts absorb less oil when crisco is used (or at least that has been my experience) but you can absolutely use frying oil!! how did they turn out?? hope they were yummy and sorry to be so late in replying . . .

My husband’s family is from LA and we’ve been craving buttermilk bars since we were last out there. I think I’ll try this over the weekend. Thank you!

Fantastic, Ruth! They are certainly crave-worthy. Let me know what you think.

Basha’s Grocery in Payson, AZ has the BEST buttermilk bars and if you snooze, you lose because they usually sell out by noon.

Hi Jessie,
As yet I haven’t tried this recipe,but, believe me, I certainly am looking forward to it. Especially since, all the donut shops around here and just about anywhere in Eastern Ontario no longer make them. Also too, just “TRYING” to find this particular recipe is almost like trying to find hen’s teeth. My question is this… do you have a variation of this recipe as a “Cherry” Buttermilk Bar and /or a “Walnut Crunch” Bar? Thank you. Have a great day. Kindest regards. Terrance.

No I do not have any variations, Terrance. Sorry!

Can’t wait to make these. I’m from Las Cruces, a bakery there, Monsimer’s had them. Many memorys of Saturday mornings with my dad taking me for a buttermilk bar. I have been searching for a recipe…thank you for your tenacity.

so happy to hear that! keep me posted about how they turn out.

When I have the time to make this recipe, I am definitely going to give it a go. We are from Wisconsin and now living in Georgia. In Wisconsin this donut is called a Cruller and we miss them dearly! Georgians have no idea what we are taking about when trying to explain a Cruller. Thanks for the recipe. ?

please do! and let me know what you think. and you’re so welcome . . .

Sarah: did you make this recipe?? I am in search of that Milwaukee cruller recipe. While some on the internet boost that their recipe is THE cruller recipe I’ve been disappointed. Do share what you thought when you made these

hope you give them a try stephanie!

Thank you Jessie for posting this recipe and how to guide!! 40 years ago my husband and I were in California expecting our first baby. I was craving donuts and there was a little place up the road that made buttermilk donuts. Every morning they would start making them at 4 AM and we would be standing outside their pass through window waiting 🙂 I am certain this is The Recipe! I am going to make some this weekend!! Been a long time waiting. Bless you!!

Yay, Nicki!! So excited to hear this. Please let me know how they turn out – and if they bring back memories . . .

Just made these to satisfy a cruller craving, and to sell in my restaurant….if they taste half as good as they look, we are golden ?

Fantastic! Hope they are a big hit. Let me know how they are received . . .

Penultimate doesn’t mean what you think it means.

True that. Just changed it.

Hello, love the recipe. Just recently tried these, and Wisconsin we call them crullers (“crawlers”)… Mine turned out fairly well, but they did absorb a lot of oil. I’m wondering if you have any recommendations for that? I saw the note about Crisco maybe being better, would you melt 2 inches worth of Crisco into the Dutch oven to deep fry in the same way as you would with vegetable oil? Or how would that work? I am looking for any suggestions to get them crispy but not so oily. Also curious, how do you think low-fat buttermilk might react in this recipe? Thank you!

I’m so glad you liked the recipe and so sorry the donuts were oily. Definitely try the crisco and yes – melt enough so there is two inches of hot oil. Also make sure your
Oil stays at temp. If it is lower than 350 the donuts will absorb oil. And low fat buttermilk is fine! Full fat is hard to find.

I’m might be a little dense but, where is the damn recipe lol!

sorry! there’s a link to it at the bottom of the post in the last sentence – last word, in fact. but it’s also here: https://www.thekitchn.com/old-fashioned-buttermilk-bar-donuts-recipe-23018355

This recipe does not match what you said in the article? I was looking for the recipe with the 4 yolks and the shortening with the vanilla bean paste?

you’re right. apologies. i changed the recipe once it was published on the kitchn website. thought it still tastes the same . . .

I can’t find your recipe on here. I desperately want to try. From cali. Living in Georgia now 9 years. They don’t have donuts like calif. And these ones were my favorite and miss them.

Great! Go to the end of the post and you will see this sentence “The recipe can be found here.” Click on the word “here” and you will be brought to the recipe!!

Is there a way to print the recipe?

Yes. At the end of the blog post there is a link to the recipe which will take you to the Kitchn’s website where the recipe lives. When you go to the Kitchn you will see that the recipe can be printed. Let me know if this helps. https://www.thekitchn.com/old-fashioned-buttermilk-bar-donuts-recipe-23018355