I first learned about the “World’s Best Cake” from Bakers Royale (although the original recipe is Sweet Paul’s) and thought it sounded completely amazing: fluffy cake, with a baked, slightly chewy, yet crispy, marshmallow-y meringue, layered with creamy whipped cream. So very “world’s-best” sounding to me, in fact, that I knew then and there that I wanted to develop my own variation with a coconut twist (in my world, a cake with meringue and cream demands coconut). A little bit of internet research revealed almost no recipes for cakes with baked meringue (save for this meringue cake from Joy of Baking) and only a handful for “world’s best” cakes other than Sweet Paul’s (such as this Midsummer Cake).Sweet Paul’s version was republished on HuffPost but no one appeared to be tweaking it. Because I had other goodies up my sleeve in need of developing, I put my thoughts of the world’s best cake on hold, until i saw this espresso, cinnamon, maple cake and decided I, too, had to make my mark on the world with an attempt at the best. 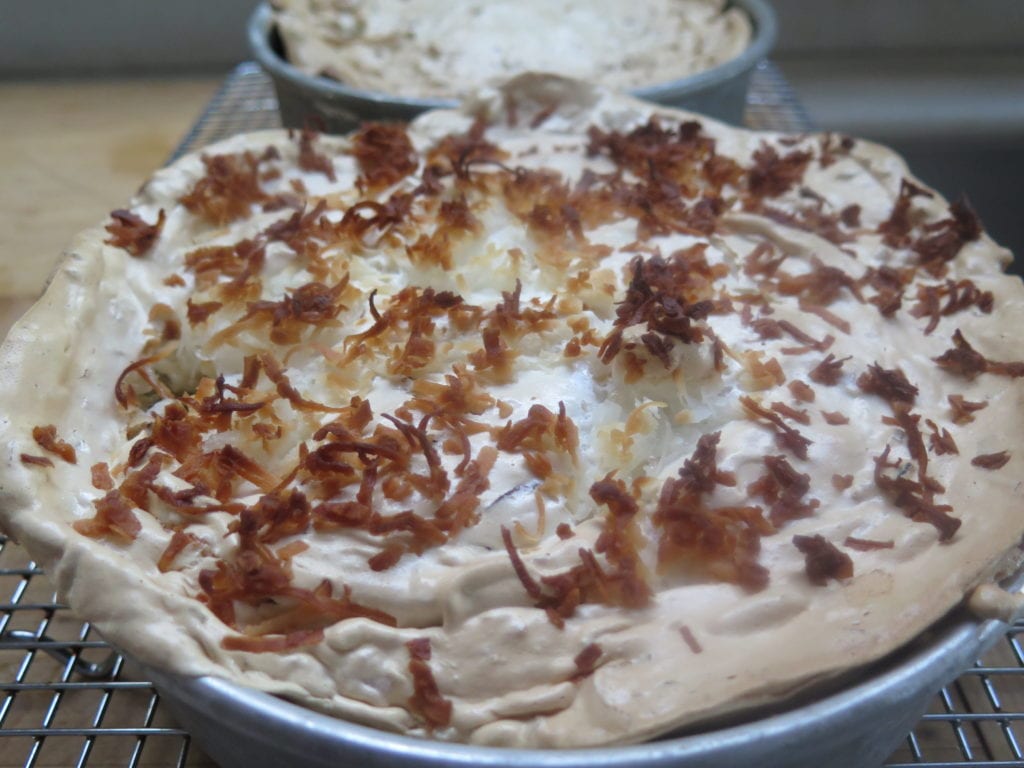 The meringue and whipped cream layers of the cake were no brainers. I knew I’d add toasted sweetened coconut to the meringue and coconut extract to the cream, and as for the cake layers, having developed two different coconut cakes for Matt and Nato’s new book, Baked Occasions, a bundt and a sheet cake, as well as having created my own coconut cake in the form of lamingtons, I already had some coconut cake tricks up my sleeve (i.e., I knew my cake would have coconut oil in it, as well as shredded sweetened coconut). In addition, I thought I might try evaporated milk as my liquid since I have been obsessed with making this coconut cake (which calls for evaporated milk) for at least a year, although I have yet to do so.

However, my first attempts at the cake layers of the world’s best cake were dry and decidedly un-fluffy. That is, until I remembered Shirley Corriher’s magnificent moist golden cake from her book/my bible, Bakewise. I followed her creaming method to a T, ditched my evaporated milk idea for a combination of buttermilk and whipped cream (for increased tenderness), substituted cake flour for all purpose (again for tenderness), and increased the amount of sugar and butter. The resulting cake? So decidedly moist and tender that I almost felt badly covering it with meringue and filling the layers with whipped cream. Thankfully, however, not that badly . . . as the combo of this super moist cake with the meringue and cream is truly the world’s best.

Thanks for subscribing! Please check your inbox to confirm your subscription.
Cakes Coconut