Yup, it’s a chocolate whoopie pie post; and I know what you’re thinking: they’re totally kind of last year. But I love them — which makes sense in light of the fact that I am a chocolate cake with vanilla frosting fanatic, and back in the day I was all about a Hostess Suzy Q or a Drakes Devil Dog, two very whoopie-ish packaged treats from my late 70s/80s childhood. Moreover, even when my whoopie love has been tested, I’ve remained steadfast. (While working at Baked, I always opted to celebrate my bday with a chocolate whoopie pie (or several), even when offered any cake of my choosing). 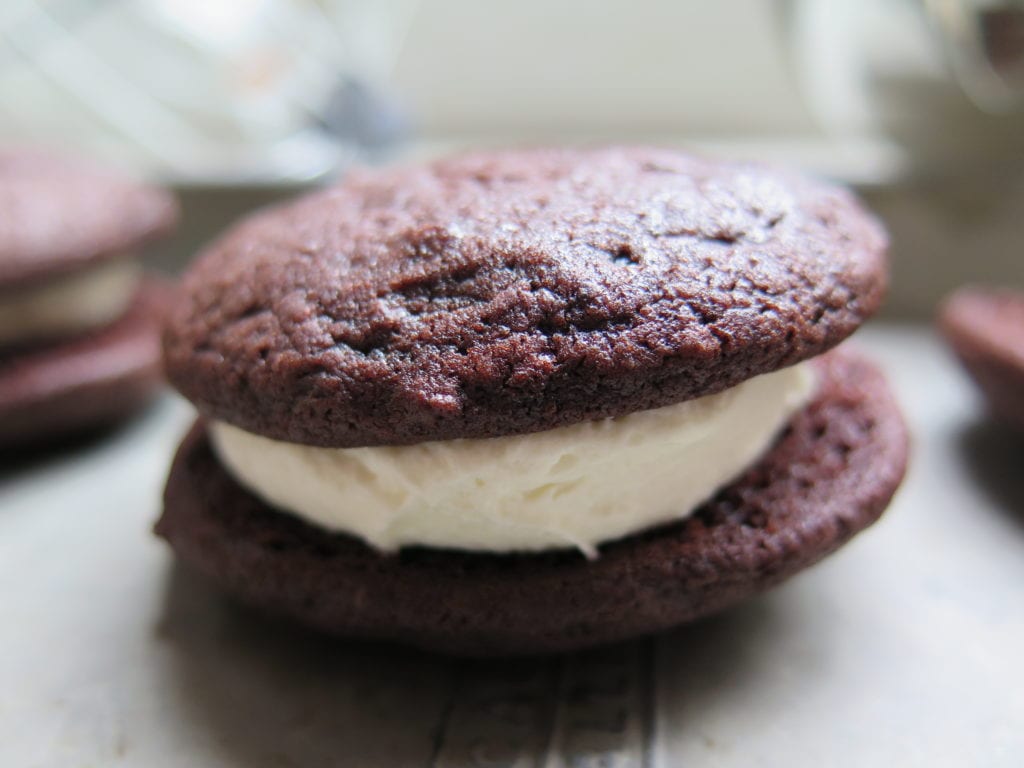 Funnily enough, despite my deep affection for chocolate whoopie pies, I hadn’t really thought about developing my own recipe for them until this past summer. I was visiting with one of my husband’s brothers when he described making the most amazing whoopie pies with my mother-in-law (aka Nonnie), when he was little. I recalled that I had Nonnie’s recipe for said whoopies stashed in my folder at home, and using it as my jumping off point, went to work on some whoopie pie-reconnaissance soon after. Not surprisingly, my initial recon unearthed my mother-in-law’s whoopie pie recipe in Bon Appetit. since my intention was to tweak and fiddle anyway, I was nonplussed by the discovery, and tweaking began in earnest. 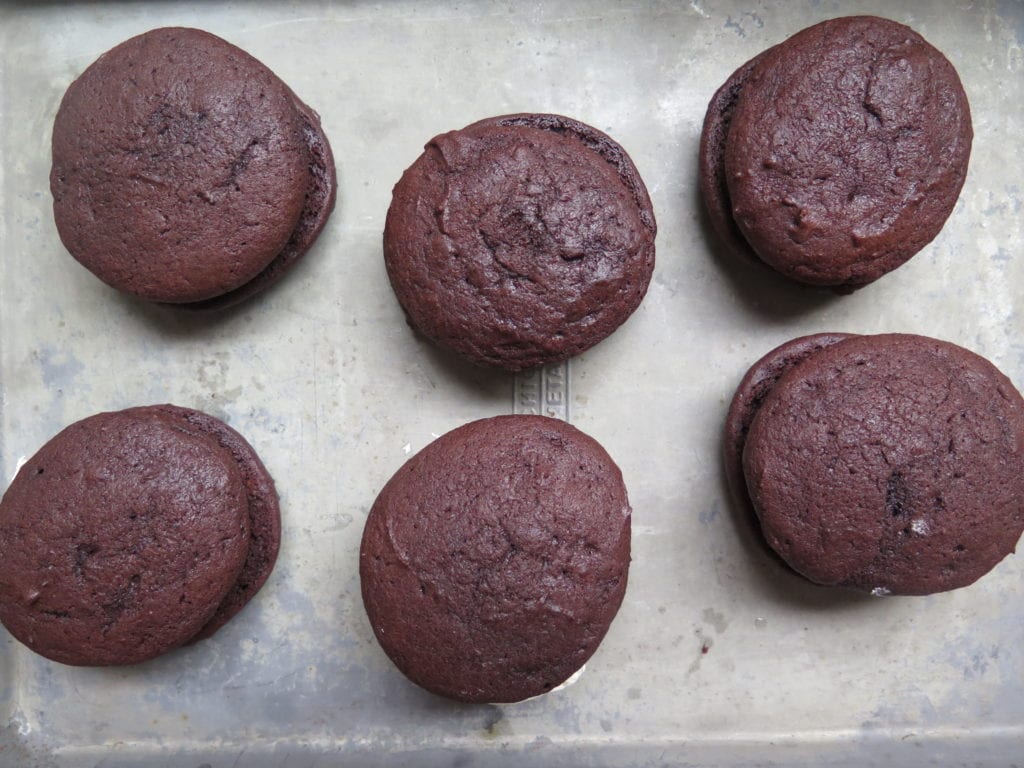 I wanted my own recipe to include yolks, instead of whole eggs (like Nonnie’s) for moisture, and also shortening to keep the pies from spreading while baking (like Nonnie’s again, and like Martha Stewart’s whoopie pies). from Baked’s recipe and from the book, Whoopie Pies (written by the editor at Chronicle Books of the soon-to-be released cookbook, Icebox Cakes, co-authored by yours truly), I decided upon dark brown sugar as my sweetener, for moistness again and for that caramel-y/molasses-y flavor-thing. I chose buttermilk (influenced again by Matt and Nato), rather than milk, as my liquid, because I love its tang. the recipe for chocolate whoopie pies in the book, American Desserts, inspired me to amp up the amount of cocoa powder in my recipe, but once I did so, I added a bit of extra fat (in the form of butter) to compensate for cocoa’s drying nature. Additionally, I decided to bloom the cocoa powder in boiling water and add a bit of espresso powder in order to truly make the chocolate-y nature of these pies sing. 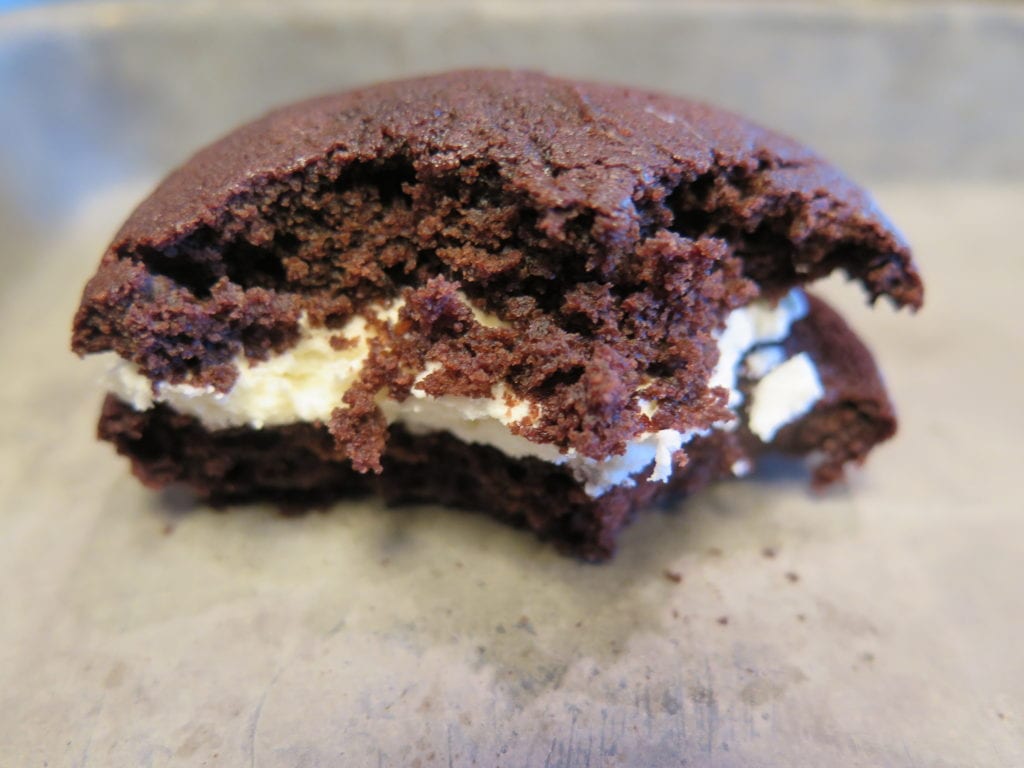 And sing they do. They are perfect little uber-chocolate-y cakes, filled with my traditional old-school buttercream frosting (however, feel free to prepare them with whatever filling you would like — at Baked they fill them with Swiss meringue buttercream). Yes, I realize that I could have spiced things up a bit (figuratively and literally) with a flavored filling (chocolate cardamom whoopie pies anyone?), but for me, these whoopies are all about having once been a girl who loved Suzy Qs, and I’ve never seen said snack-cakes filled with anything but a delightfully, fluffy, vanilla-flavored cream. 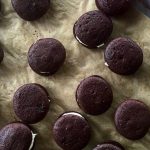 Thanks for subscribing! Please check your inbox to confirm your subscription.
Cakes Frosting Chocolate

I’ve tasted Jessie’s whoopie pies and they are AMAZING.