So, I first heard about the vodka pie crust thing in the fall of 2008 when I was still working at Baked. My lovely and oh, so dear colleague at the time, Sefania, arrived one morning raving about a Cooks Illustrated pumpkin pie with a vodka crust that she had baked and brought to a dinner party the night before. Now, I’m going to bastardize the story a bit here, but somehow Mark Bittman heard about her pie (maybe someone who was at the dinner party with Stefania worked with him?) and long story short, a few weeks later, there was a post on the NYT Diner’s Journal blog about Stefania’s pie (or, more accurately, about how her pie had influenced the writer of the post). And the vodka pie dough phenomenon was forever etched in my brain.

However, despite the fact that I’ve known about the joys of substituting vodka for a portion of the liquid in one’s pie dough for the last 6 years (and truth be told, Coks Illustrated actually first published their vodka pie dough recipe a year earlier, in November of 2007), it took me until three weeks ago to actually try it. Spurred on by my non-baking husband, of all people (he heard a story about the dough on NPR), I decided to try using vodka, instead of cider vinegar, in my off the charts flaky pie dough. My thinking was two-fold: The vodka might make the dough easier to roll out (my recipe produces a pretty tender dough due to the pastry flour, copious amounts of butter, and lack of liquid, and it has been known to tear on occasion). And if the vodka thing in the pie dough was coming back to me all these years later via my husband, it was probably a sign. 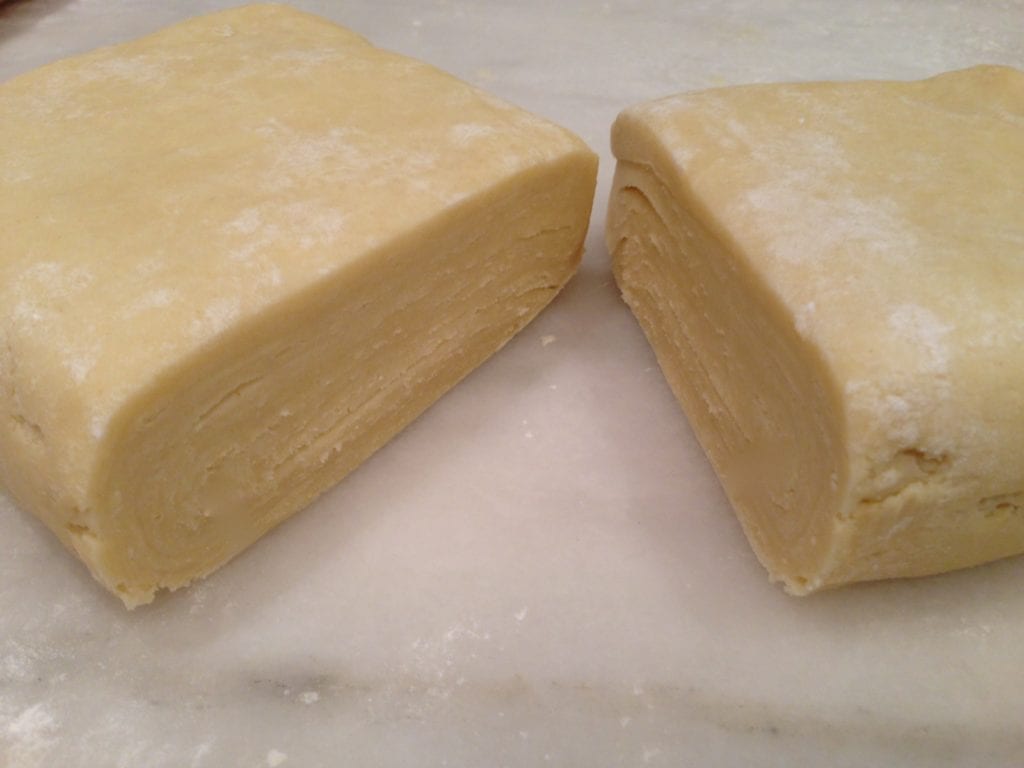 And a sign worth heeding: the vodka did indeed make the dough easier to work with (the science behind this is spelled out rather nicely on Food52) and I was ever so pleased to have finally given it a whirl.

Note: My original off the charts flaky pie dough post explains the technique I use for that dough, as well as this one, if you’re curious.

Off The Charts Flaky Pie Dough with Vodka — Redux

Thanks for subscribing! Please check your inbox to confirm your subscription.
Pies

7 replies on “Off the Charts Flaky Vodka Pie Crust – Redux”

I will try out vodka pastry dough for Thanksgiving!

you will not be disappointed. the apple sheet cake is also nice for thanksgiving . . .

Hi Jessie,
I’m dying to try the pie dough for Thanksgiving but am making a lot of pie. Would it be hard to handle a double recipe (for a large slab pie) at once? I’m worried about the frissage and tossing phases. Also, do you have a weight measurement for the flour? (I suppose it would depend on whether you made your own or used a commercial pastry flour.)
Thanks

So glad you want to try to make the pie dough! Truth be told, I ALWAYS make a double batch (for a slab pie – almost never make pies in pie plates anymore). And, really the fraisage and tossing is not too onerous – even with the double batch: not at all. Let me know how it turns out.

Oh, and I don’t have weight measurements for the flour (although I should) – and try to get King Arthur pastry flour, if you can.

I’m studying this recipe and will try it in the morning, Jessie. My Grandma Wanda might roll over in the grave when I add the vodka……she was BIG fan of the slab pie and hardly ever made a regular round one. Happy T-‘giving to you and your brood. xo

sorry i missed this, kali! just seeing it now post-turkey day. hope the dough worked out and that there was no grave rolling. love it that your grandma was a slab pie fan.