So, even though I love a bar featuring caramel — like, who doesn’t? — I never intended to develop a recipe for one. Instead, I thought I might riff on this chocolate, pecan and caramel tart. However, a friend begged me to post a recipe for a bar, as she was still obsessing over these espresso caramel bars, a treat I had made for her many moons ago, and so I obliged. As I began musing over chocolate caramel bars, in all their sweet and salty glory, the first salted caramel bar I ever made at home came to mind. It was a recipe from a 2007 issue of Bon Appetit. I loved that bar (basically a millionaire’s shortbread bar) — a lot. So much so, in fact, that years later, when I developed a caramel chocolate bar while working at Baked (“the salted caramel,” or “Twix,” bar), it was the Bon Appetit bar that I was trying to replicate. However, during this most recent chocolate-caramel-bar-go-around, I wasn’t really feeling the shortbread crust, or the caramel made from sweetened condensed milk of my all time fave. 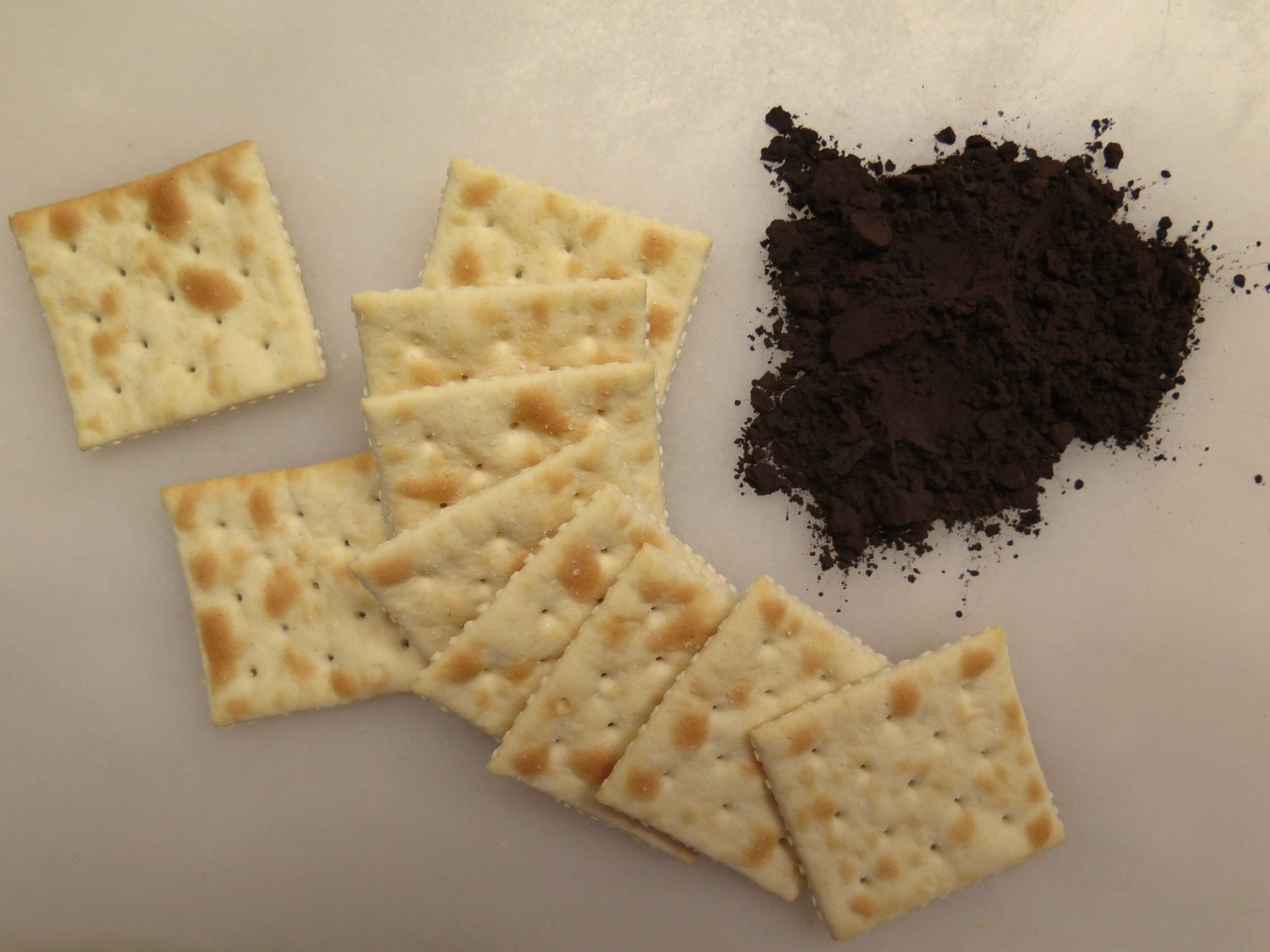 Instead I was feeling a  chocolate caramel bar without an actual layer of chocolate (don’t worry chocaholics, I’ve included a chocolate covered variation, as well), and with a chocolate saltine crust, as well as a layer of caramel made the old-school way (with sugar, water and cream). Kind of crazy sounding, I know, but I’d been slightly obsessed with the idea of saltine crusts after reading about Bill Smith’s Atlantic beach pie and making this grapefruit custard pie. Moreover, I had (finally) purchased a bag of black cocoa powder, and kind of loved the idea of combining the saltiness of the crackers with the deep chocolate flavor of the cocoa. And with a thick layer of salty/sweet caramel on top and maybe a sprinkling of flaky Maldon sea salt? Sort of beyond awesome sounding, no? 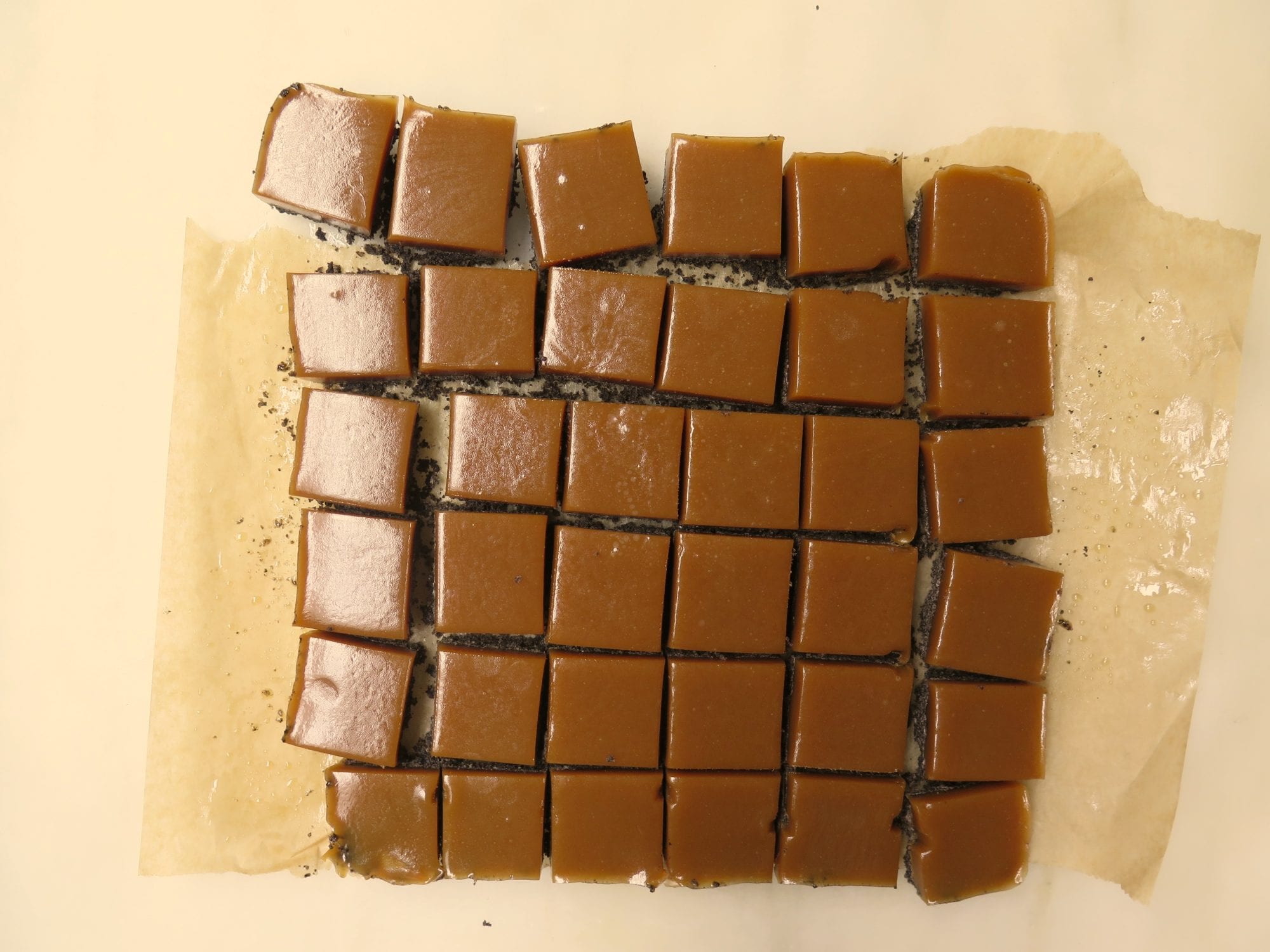 Thinking that the crust might be the trickier part of developing the bar, I began with researching said unusual crust in earnest, and honestly I was hard pressed to find anything out there calling for crusts with doctored-up saltines. I was treading in uncharted waters and I was kind of psyched. Because I wanted my crust to be uber-chocolate-y, without being cloyingly sweet, I added only a bit of sugar and as much black cocoa as those saltines could handle. The resulting crust came together easily, was almost black in color, salty, chocolate-y and divine. I then turned my attention to the caramel, which — surprise, surprise — proved to be a somewhat thornier endeavor, as I needed a caramel thick enough to stay put on its chocolate-saltine-base (once removed from its pan and cut), but oozy enough to be chewy and caramel-y and delish. Moreover, because I was combining my caramel with a chocolate crust, I wanted to make sure my caramel was just a tad more salty than sweet. 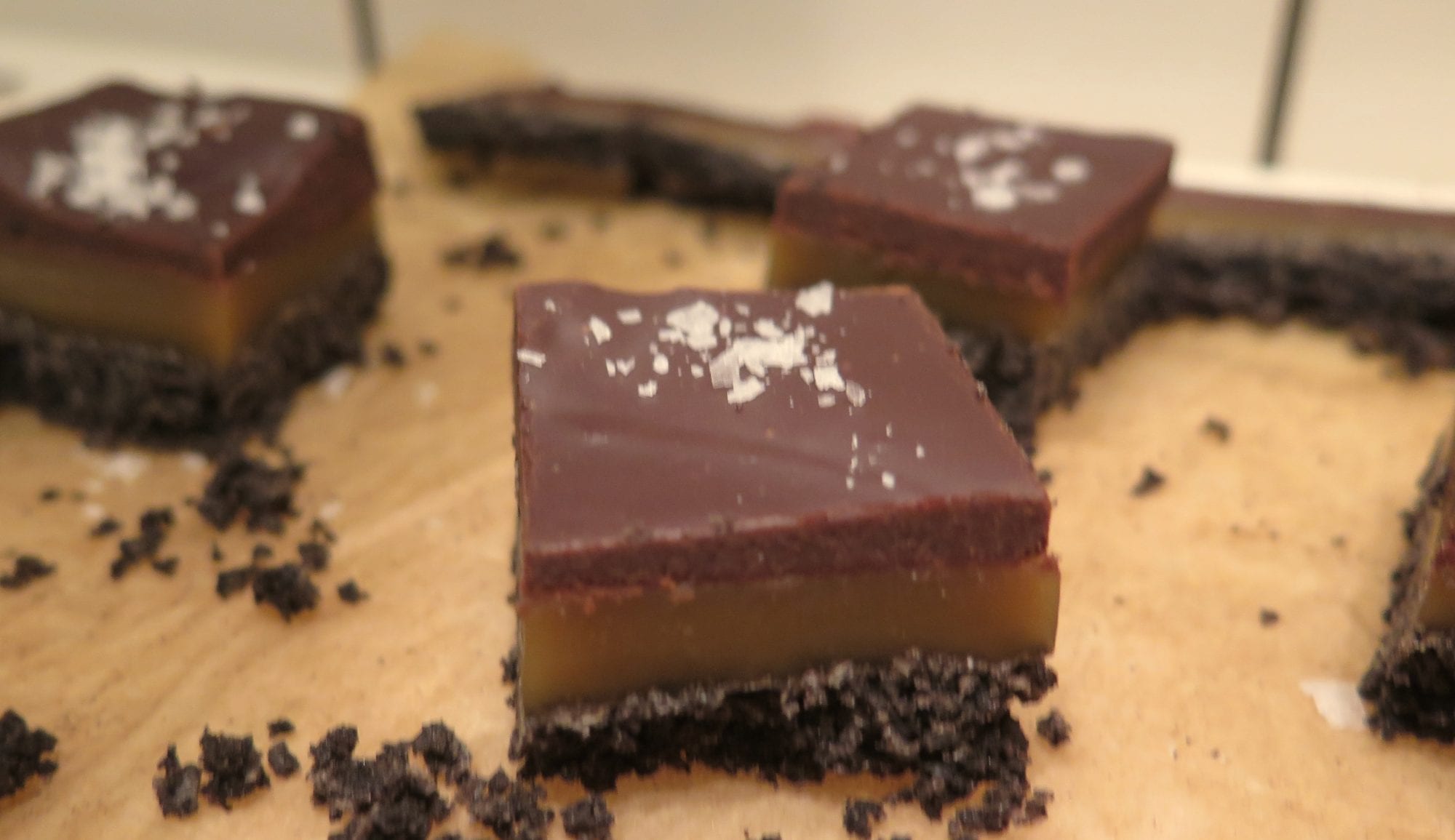 I solved the ooziness issue by combining all the ingredients together and bringing them (slowly) to soft ball (full disclosure: this caramel took me a few tries to get perfect. Am I the only idiot out there whose been cooking her caramel at way too high a temperature all these years??). And, in racking my brain for caramel based treats with chocolate bases that struck the perfect balance of salty and sweet, I, of course, thought of the the caramel chocolate tart at Marlowe and Son in Brooklyn. With a little Nancy Drew-worthy internet sleuthing, I found the Marlowe and Son recipe, only to learn from Lottie and Doof, that the original recipe is actually from Claudia Fleming’s, The Last Course. Needless to say, if Claudia Fleming is responsible for combining a chocolate crust with a caramel filling that Marlowe and Son chooses to serve to its customers, then I knew my chocolate-based caramel bars would be in extremely good company. And if you make them (which I hope you do) I think you will conclude the same. Chocolate-covered or not, these caramel bars will not disappoint. 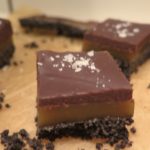