Black bottom coconut cream pie. Kind of a delicious-sounding sweet, no? Like even over-the-top delicious-sounding? It is, at least to me. I adore coconut, particularly when coupled with chocolate. But despite that fact, I had never actually made a coconut cream pie until quite recently, when I developed this one. Now don’t get me wrong, there were other coconut desserts in my past, such as this bundt cake one and this coconut sheet cake, developed for Baked Occasions, and this coconut cake one and these lamingtons (housed right here on this blog and developed just for you). But a coconut cream pie? Never (and this is kind of even extra scandalous cause such a pie is basically my husband’s favorite dessert — oops). But here’s the good news: It may have taken me longer than some of us would have liked (ahem) but I kind of think this particular pie was worth waiting for. Like really worth it. And my harshest, and therefore most valued, critic (aka my husband) adores it. Phew. 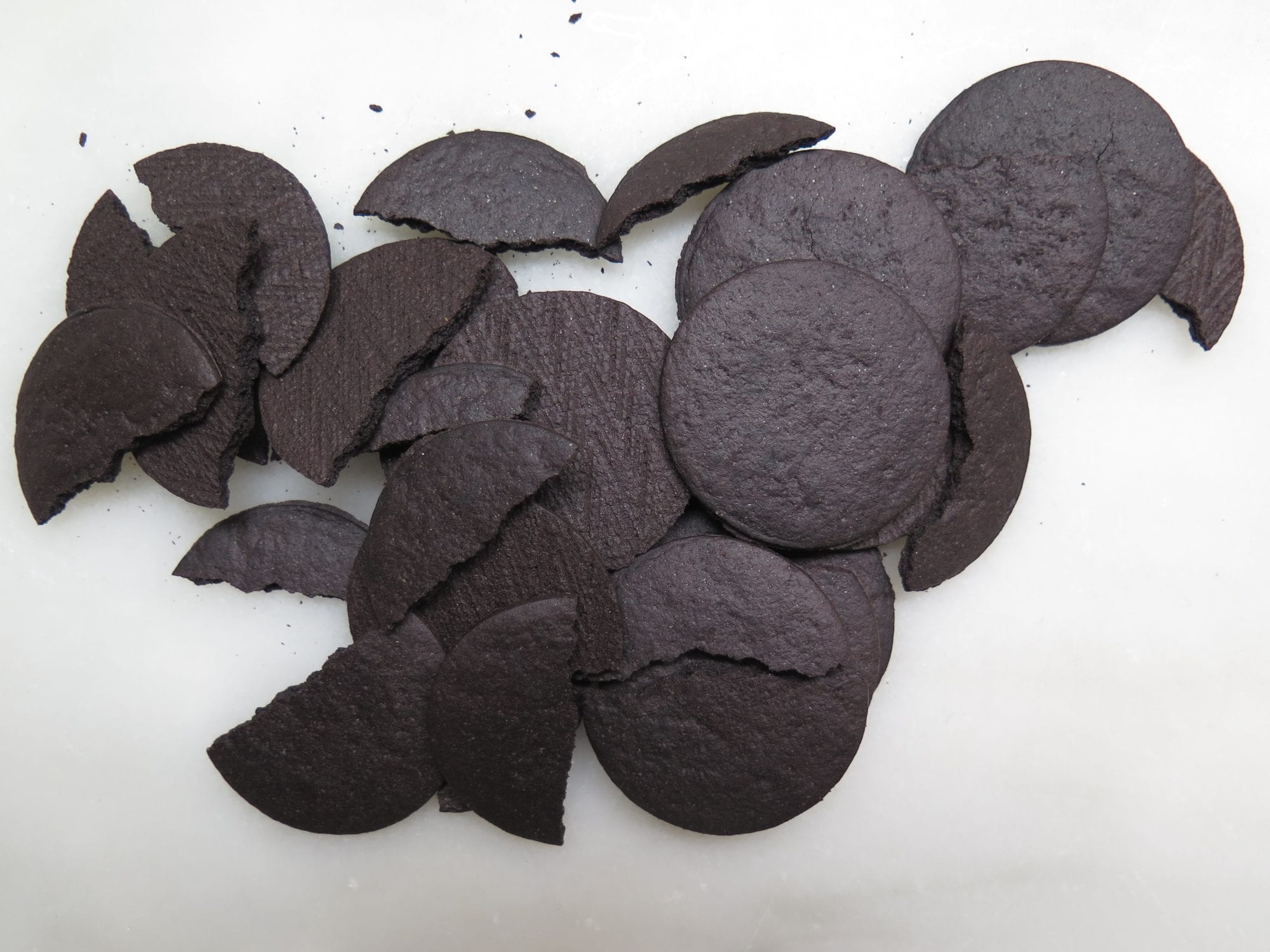 You know what else about this pie? It is super easy to make — I mean we’re talking about a no-bake crust, here (yes, there’s some laborious pudding-stirring involved, and a wait for said-pudding to set up, but I’m not kidding, it’s still a cinch to throw together). Which shouldn’t be all that surprising, as a coconut cream pie, in fact, all cream pies (including my favorite chocolate cream pie) are made up of just three components: the crust, the filling (pudding), and the topping (whipped cream). And for those of us with an icebox cake obsession (see my malted icebox cake recipe for why that might be), the similarities between these two super, simple desserts cannot be overlooked. No, the crust of a cream pie does not turn “cakey” after absorbing layers of pudding and whipped cream, à la an icebox cake, but what I love about an icebox cake is exactly what I love about a cream pie: The combo of the crust (be it cakey or crispy) with creamy, rich pudding and light and fluffy whipped cream. And, admittedly, when I sat down to develop my recipes for the coconut pudding and whipped cream components of this pie, it was my myriad of pudding and whipped cream recipes from my soon-to-be-released Icebox Cakes cookbook, that I turned to for guidance. 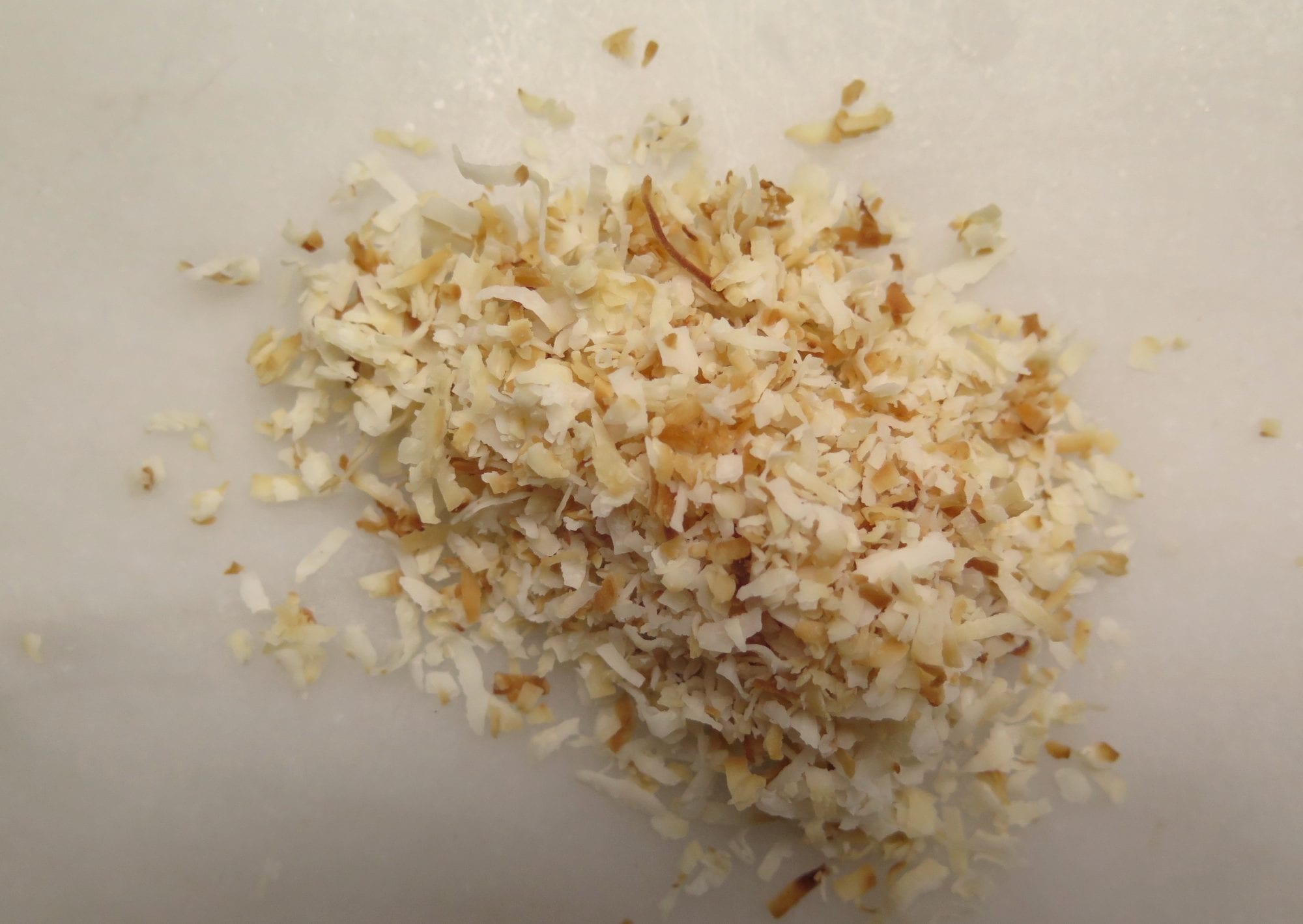 The coconut pudding, for instance, is a super simple corn starch-based pudding, with eggs that don’t require tempering (further streamlining the process), and a mixture of milk and cream (for added lusciousness), just like the puddings in my book. Of course, this one has two cans of unsweetened coconut milk, a hefty dose of sweetened shredded coconut, and some coconut extract, as well, so as to achieve the uber-coconut flavor required (at least by me) of a coconut cream pie. The whipped cream, too, is like those in my book — very lightly sweetened and whipped just the tiniest bit more than you’d think necessary, for added stability. With the filling and topping of my pie taken care of, I turned to the black bottom crust, and looked not to my book, but to Epicurious (the inspiration for my pie’s name, as well), and was very intrigued, for here was a crust that required no baking. Kind of a bold power move, but not one I was yet ready to embrace. Instead I looked at this pie crust recipe on Chow and this wafer crust from Martha Stewart. I then baked my crust, and was disappointed (as were the sixth grader and 49-year-old that I happen to live with) to find it just the tiniest bit too hard/crispy. annoying, to say the least. 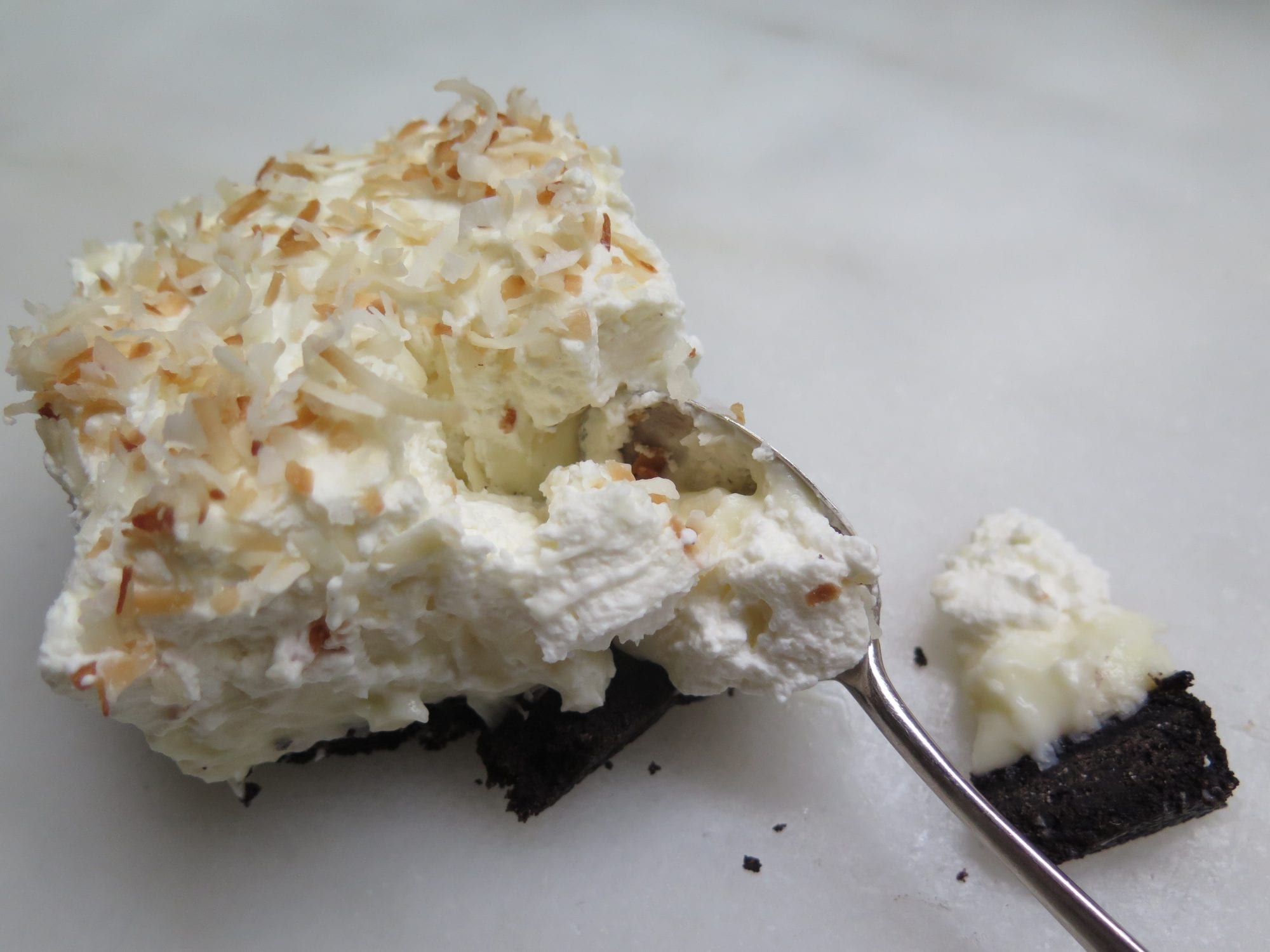 I was left with no recourse but to check in with my Pie and Pastry Bible, and learned (on page 65, to be exact) that, in fact, a chocolate wafer crust is not only sturdy enough to forego a hot oven, but benefits (in texture, color and flavor) exponentially from not being baked. I was sold. And the next version of my pie, happily for my resident testers, had the most perfect, slightly crispy, but truly crumbly (in a good way), chocolate-y crust. So, with the topping, filling, and crust in order, my pie’s presentation was all that was left to tackle. As is my way, I was leaning towards a slab pie of sorts (see my recipes for apple sour cherry pie, raspberry pie and concord gape pie to fully understand my slab-pie thing). But a half-sheet pan (a standard cookie sheet with a rim) was too shallow for my mile-high pie. So, I ditched the cookie-sheet-as-pie-vessel notion, and looked to my 13x9x2-pan for a “sheet-cake” inspiration of sorts (and to the internet, which brought me to a coconut bar recipe from Willow Bird Baking). Long story short, this pie is indeed of the “sheet-cake” variety, and perhaps it’s “slices” should even be called “bars.” However, I’m content to just call it spectacular and to politely request that you please make it at your earliest convenience. 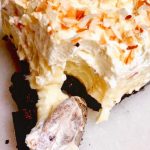 For the whipped cream

To make the crust

To make the pudding

Plan ahead: The crust must be frozen for at least an hour, the pudding can take up to 30 minutes of stirring (depending on how high a flame you use) before it is ready, and, once assembled, the pie must rest in the fridge for about 4 hours (give or take).
whisk the pudding constantly: it is super important to whisk the pudding for the entire time you are cooking it, or it will burn. this might seem like overkill: trust me, it is not.
To toast coconut, place the coconut on a cookie sheet in a 350 degree oven (I used my toaster) and toast the coconut for 15 to 20 minutes, stirring the coconut every 5 minutes or so, and rotating the pan, to prevent burning, until the coconut is evenly browned.
Thanks for subscribing! Please check your inbox to confirm your subscription.
Pies Chocolate Coconut