I’ve got some super strong childhood food memories — many of the packaged variety (i.e., memories of devil dogs, Double Stuf Oreos, Baskin Robbins mint chocolate chip ice cream, Pepperidge Farm frozen raspberry turnovers) and a handful, but by no means a ton, of the homemade variety (i.e., memories of my grandmother’s lemon cake and her perfect and very tiny chocolate chip cookies, and my mother’s apple brown betty). Because I did not grow up in a home where the scent of freshly baked pie greeted you at the door, as noted in my chocolate chip cookie post, (I think it’s probably safe to say that a pie has actually never been baked in the home in which I grew up) my memories of the store-bought treats of my girlhood far outweigh the memories of anything baked from scratch. So it should come as no surprise that, although these chocolate-crusted pecan tassies (mini pecan pies) were technically inspired by a food memory of the homemade variety, in this instance “homemade” does not describe a sweet baked-in-my-childhood-home-by-someone-related-to-me. To the contrary. the inspiration for my tassies was a treat made from scratch by a petite Hungarian grandmother living in Chicago.

I’ve had the same best friend since I was eight, and every Christmas, from the time we were in fourth grade until we left for college, my friend’s grandmother would arrive to visit her with a shoe box full of carefully wrapped little nutty, buttery treats. Were they chocolate flavored? No. Did they definitely have pecans in them? Not sure. Were they Hungarian in origin? No one knows. Were they even pie-related at all? Couldn’t tell you. But I loved them, looked forward to them every year, inhaled them whenever I was given the opportunity, and have never forgotten them. Now, I don’t want you to think that I am some kind of pecan pie obsessive (in light of already having posted this pecan bourbon slab pie), or that I am super into miniature-sized desserts (I have already noted on this site that I am very much into jumbo), or that I am not happy unless I am creating recipes with multiple steps that preferably include pie dough. The truth is when I first requested the recipe from my friend’s family, I was picturing the treat with kind of a walnut-y vibe, and I wasn’t even thinking mini-pie-style. But no one was in actual possession of the recipe, and those in the know remembered them as a pecan tassie kind of phenomenon. and so researching such a treat began in earnest. 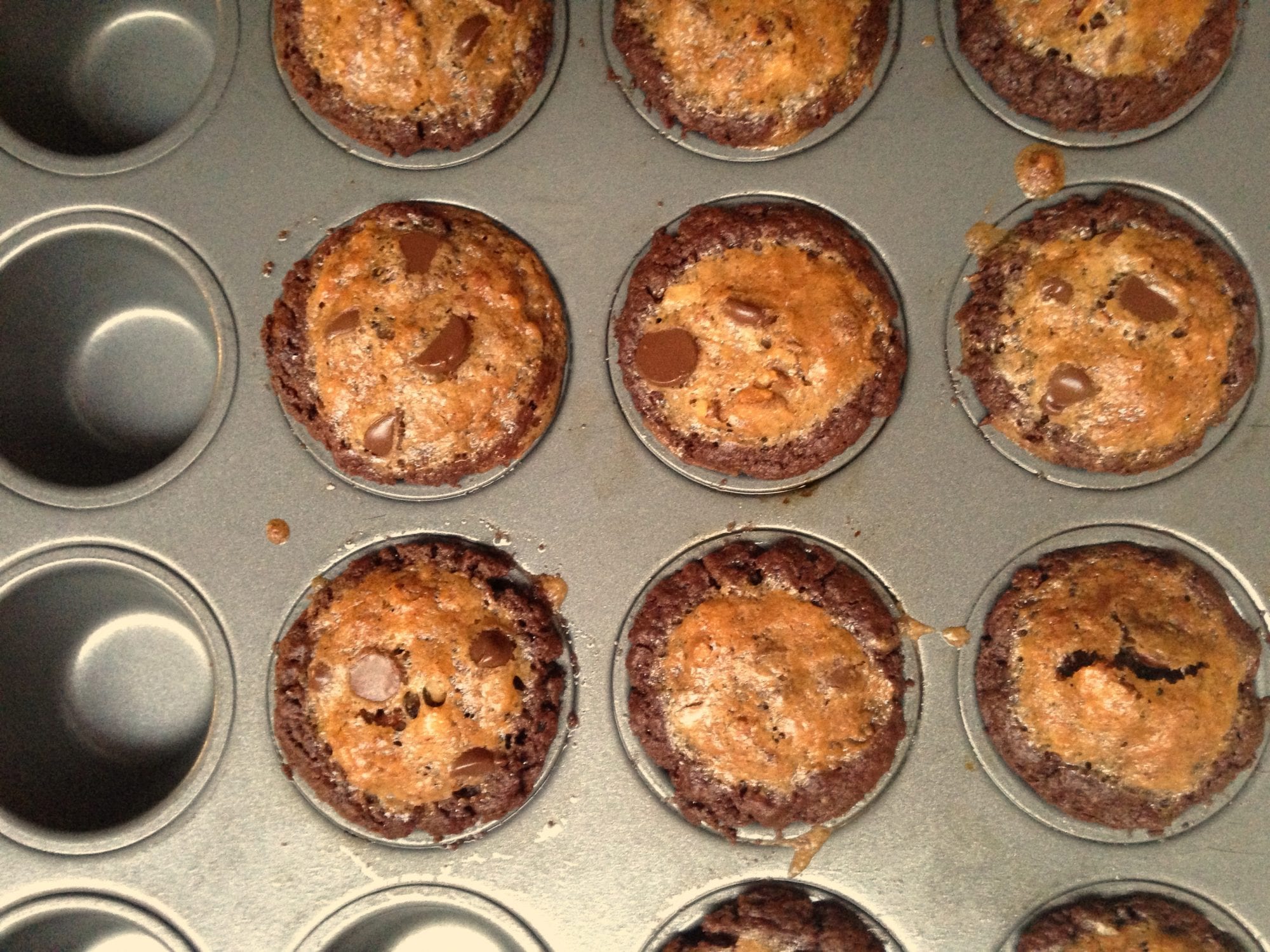 Okay, maybe not in earnest. A tassie, like a pie, requires a recipe for a crust, as well as one for a filling, and, honestly, the filling came together for me in almost no time, as I’d been helping a friend troubleshoot a recipe for pecan cookies, and I had filling on the brain (particularly one with plenty of vanilla, salt, melted butter, toasted pecans, brown sugar, and no corn syrup). The development of the crust proved just the tiniest bit more labor intensive, as I became obsessed with the idea of a pecan tassie with a chocolate cookie crust (like the crust i had developed for my black bottom coconut cream sheet pie). But after much trial and error, I could not make it work. (Maybe if it was in bar form rather than mini-muffin style?) A little googling revealed that the vast majority of pecan tassie recipes (i.e., all of them) call for a cream cheese based pie crust, such as this pecan tassie recipe from Tutti Dolci, a joy of Baking Recipe, and this Brown Eyed Baker offering. And, don’t get me wrong, I love a cream cheese crust (Rose Levy Berenbaum’s probably being my all time fave), but I wanted to go in a different direction. Martha Stewart’s tassies call for mascarpone, which I found intriguing, but I started wondering about crème frâiche. 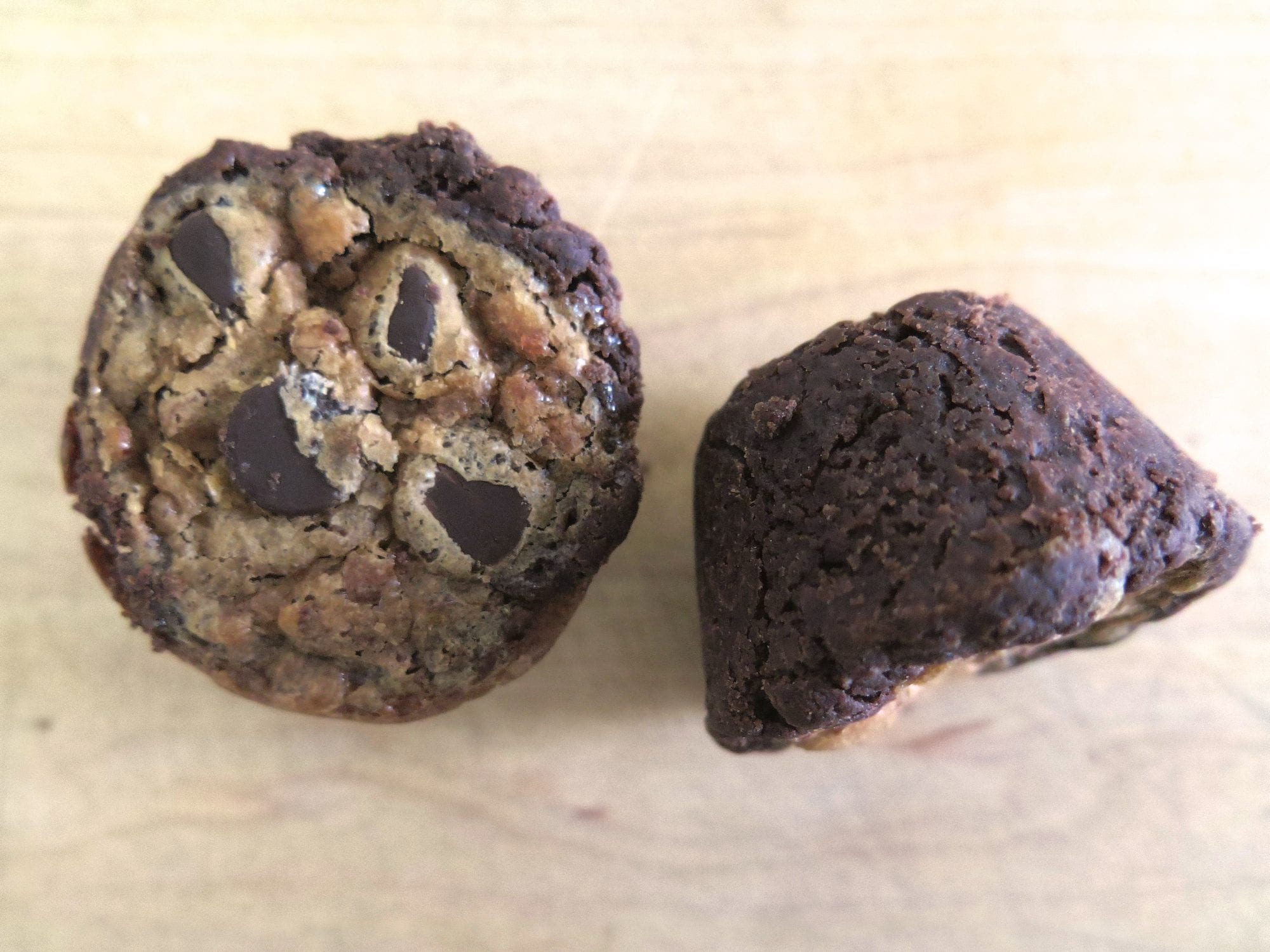 I had used it in my scones to great effect, and it added the perfect tanginess to my favorite cobbler of all time. I knew from my guru, Shirley Corriher, that sour cream in a pie crust produces much flakiness, and I was confident that crème frâiche would do the same. And I was right. The chocolate crust encasing these tassies is uber-flaky and mildly chocolate-y (didn’t want the flavor of the crust to be too overpowering) and the perfect pairing with the delectable, slightly sweet and gooey, caramel-y filling. In short, these tassies are powerfully delish, creating food memories (of the homemade variety) for my boys, and ideally reminding Hungarian grandmothers everywhere of a treat from the old country. 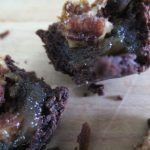 To make the crust

To make the filling

To assemble the tassies

You may have extra filling left over. if that is the kind of thing that makes you crazy, follow this, slightly larger, crust recipe: 1 3/4 cup, 2 tbsp all-purpose flour; 6 tbsp dutch-process cocoa powder; 5 tbsp granulated sugar; 3/4 tsp salt; 1 1/2 stick unsalted butter, very cold; 10 to 11 tbsp creme fraiche
Thanks for subscribing! Please check your inbox to confirm your subscription.
Cookies Pies Chocolate

My dear Mom, Grandma Helene, would be super-thrilled to have inspired you, to read your story and savor your tassies. Me too!