So, these macaroons are beyond scrumptious. They are a bit crunchy on the outside, soft on the inside, chewy, uber-coconut-y, and studded with the perfect amount of tiny melted chocolate morsels in every bite. And yet, I feel the need to tell you that, developing a recipe for them was not my idea. I was in Flour Bakery in Boston over the winter, and my niece’s fiancee mentioned his deep love of, and slight obsession with, the bakery’s coconut macaroons (I think they make a plain version and one with chocolate chips, and I think he was extra fond of the ones with chips). And, if memory serves (which it really doesn’t, cause I can’t remember anything anymore) he asked me to develop a recipe for such a treat. And, honestly, I am always so delighted to be asked to make something (there will be a milk chocolate florentine lace cookie making its way to this blog some time soon, at the request of a friend/reader) that I immediately added it to my list of recipes-in-need-of-development. And now, because passover is almost upon us and because I have yet to jump on the gluten-free band wagon, the timing for developing such a recipe seemed just right. 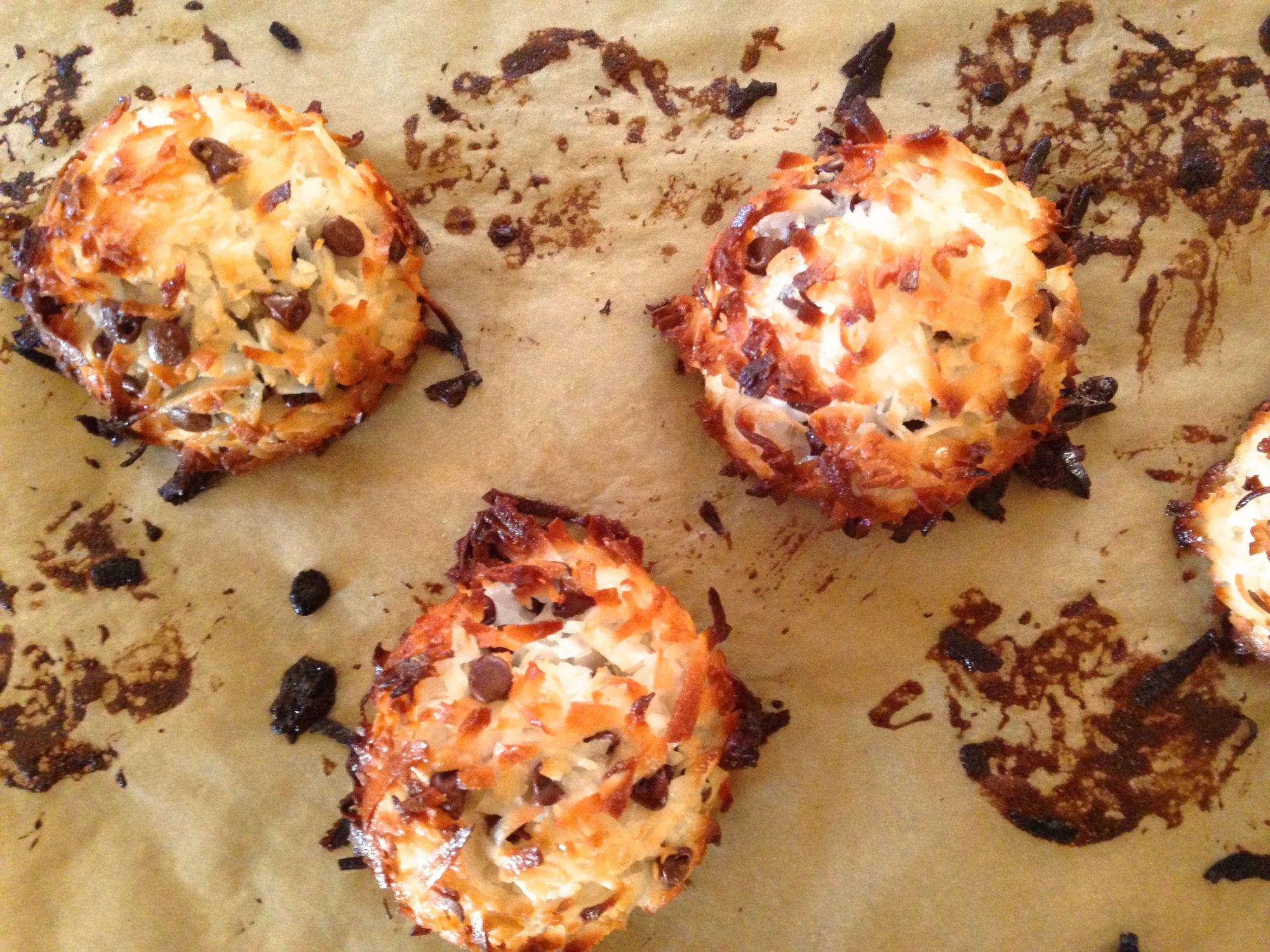 When I sat down to do so, I thought immediately of the coconut macaroons at Baked, for when I worked there, I made them a lot. (Baked’s recipe is a super simple one, and when I first started there, they were the perfect item on the production list to give to the new girl, i.e. me.) The baked recipe calls for (among other things) both sweetened and unsweetened coconut, cream of coconut, and egg whites (it is actually not dissimilar from these triple coconut macaroons) and I wondered how other recipes might differ from their’s. The answer, I realized shortly after I began researching macaroons in my books and on the internet, was almost not at all. In fact, it became instantly clear that really all macaroon recipes call for basically the same 3 main ingredients: sweetened coconut, sweetened condensed milk, and egg whites. 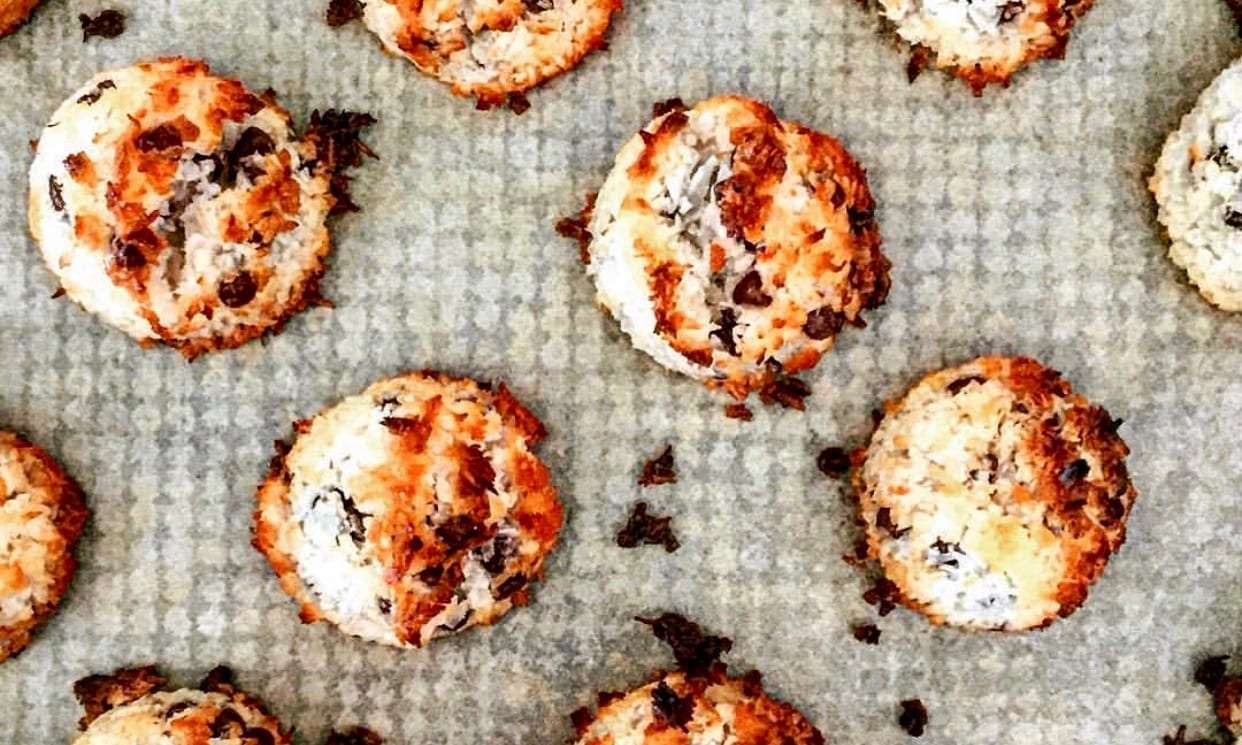 Now there are a few outliers: such as those recipes that include flour, like this Joy of Baking recipe, and those that even include pastry cream, such as the Joanne Chang one that my niece’s fiancee is so smitten with. But ingredients like four and pastry cream seemed (in my humble opinion) somewhat superfluous in a macaroon. Moreover, I was more than happy to follow the masses and develop a macaroon not so terribly different from all the others, save for a few essential tweaks that I hoped would elevate it above and beyond its fellow coconut compatriots. And so, in light of the one macaroon recipe I knew so well, and also after seeing this King Arthur Flour macaroon recipe, I decided mine would most certainly include cream of coconut, as opposed to sweetened condensed milk, and sweetened and unsweetened coconut, as opposed to just sweetened (although, truth be told, I originally thought mine would only include sweetened coconut (feeling somewhat wedded, I guess, to my “more sweet is always better than less sweet” philosophy) but even I (lover of all things sweet) found the batch with only sweetened coconut almost achingly too sweet. 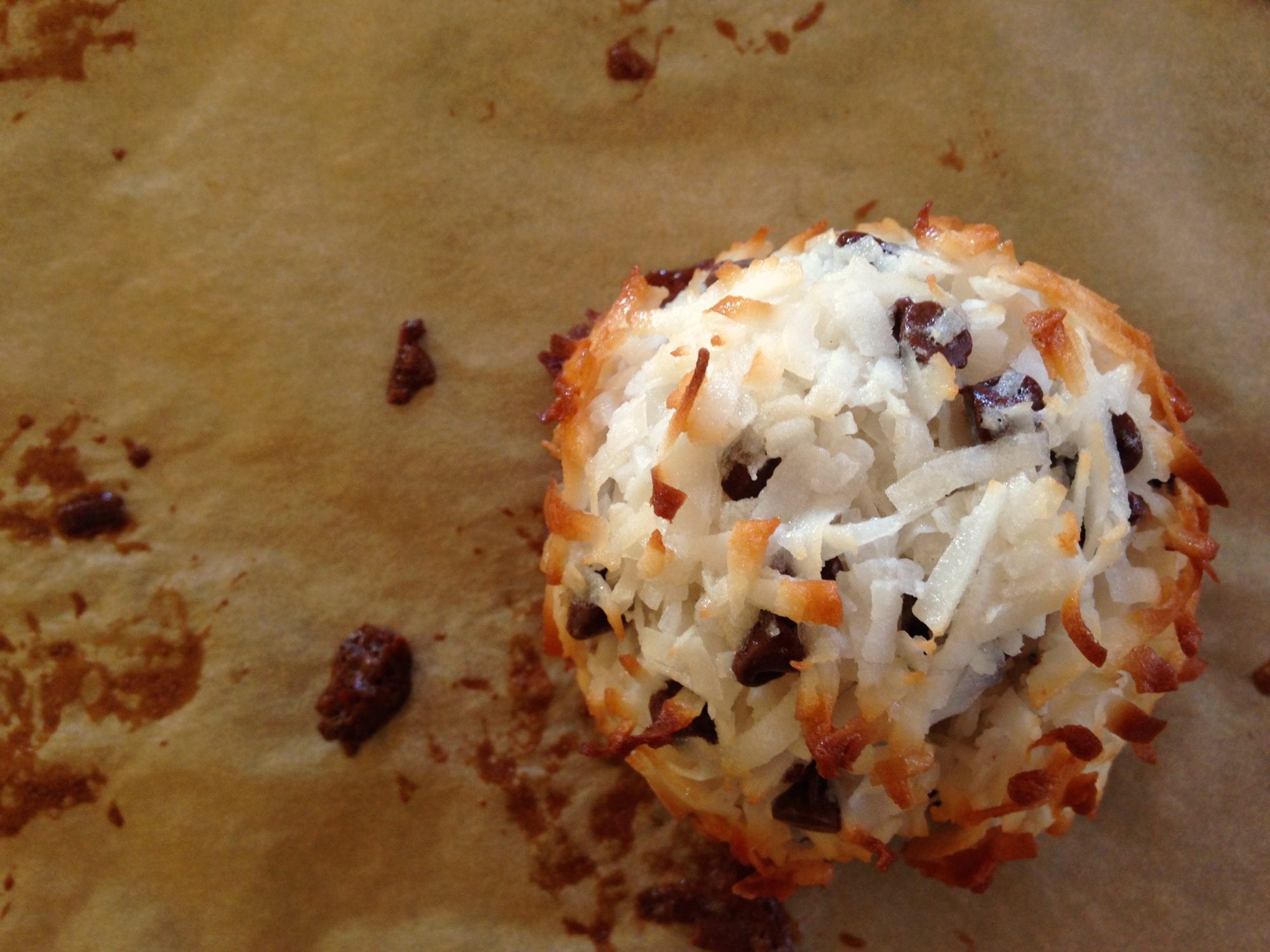 I also decided my macaroons would include egg whites whipped to medium peaks in a stand mixer, as opposed to those whisked by hand, in light of what I read on Sally’s Baking Addiction and The Kitchn. And that I would grind my sweetened coconut just a bit in my food processor in light of what i read on Smitten Kitchen, and after making a batch w/o grinding the coconut (which I found resulted in a cookie that was a bit too chewy); and finally, for a little boost of coconut flavor and a chocolate-y vibe, I decided that I would include just a touch of coconut extract and a handful of mini chocolate chips. and the results of these tweaks to (what appears to be) the standard coconut macaroon formula? Coconut macaroon perfection that I am hoping will please even soon-to-be family members with a deep commitment to a coconut macaroon made at their neighborhood bakery. 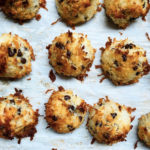