Okay, so here’s the thing: I did not set out to develop a recipe for caramel popcorn, despite the fact that it is one of my most beloved treats. And it is not because I had already developed one (although, that is indeed the case in Baked Occasions). No. The reason I was steering clear of caramel popcorn, is that I wanted to try my hand at “pop corn candy” (see below). As I mentioned in my chocolate chip snack cake post a few weeks back, I’m kind of preoccupied with (and newly inspired by) my collection of vintage recipe pamphlets. And so, once or twice each month I intend to revamp a recipe from one of my pamphlets and post it here. Pop corn candy (from the below Jolly Time pop corn pamphlet) preoccupied and inspired me in just the right way. That is, until I actually made it . . . 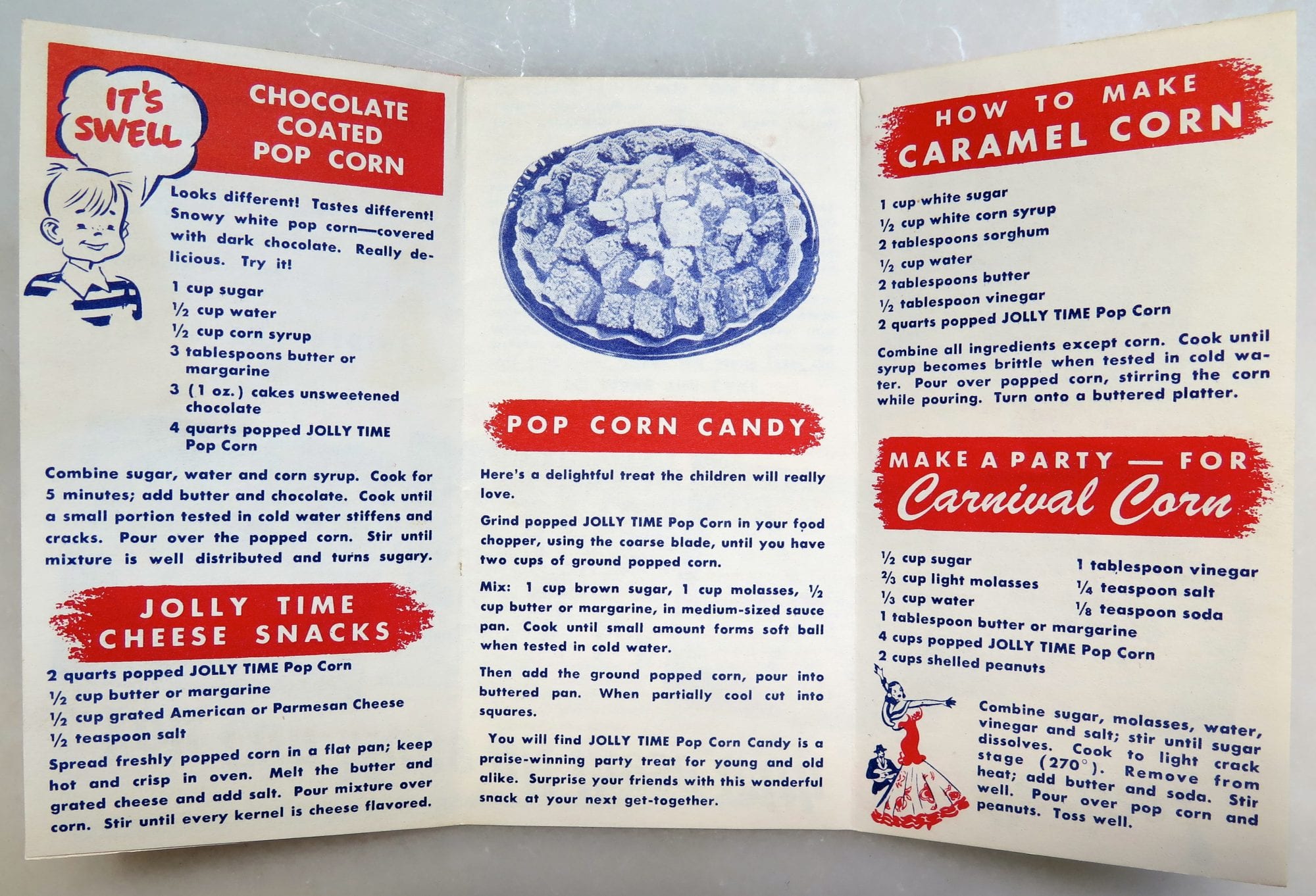 I’m not going to bore you with the myriad of issues I ran into with jolly time’s pop corn candy, but suffice is to say: Grinding up popcorn and adding it to caramel can make for a very gooey snack, indeed; and if the caramel is 50% molasses, you better be awfully fond of the deeply intense flavor (and color) of said molasses. Despite the recipe’s issues, however, and because I have trouble letting go, I felt compelled to make pop corn candy, I think,  six different times (grinding my popcorn from finely to coarsely to almost not at all) before I realized that maybe Jolly Time’s caramel corn (right next to the recipe for the candy in the pamphlet!) was what I really wanted to/should be revamping/eating. 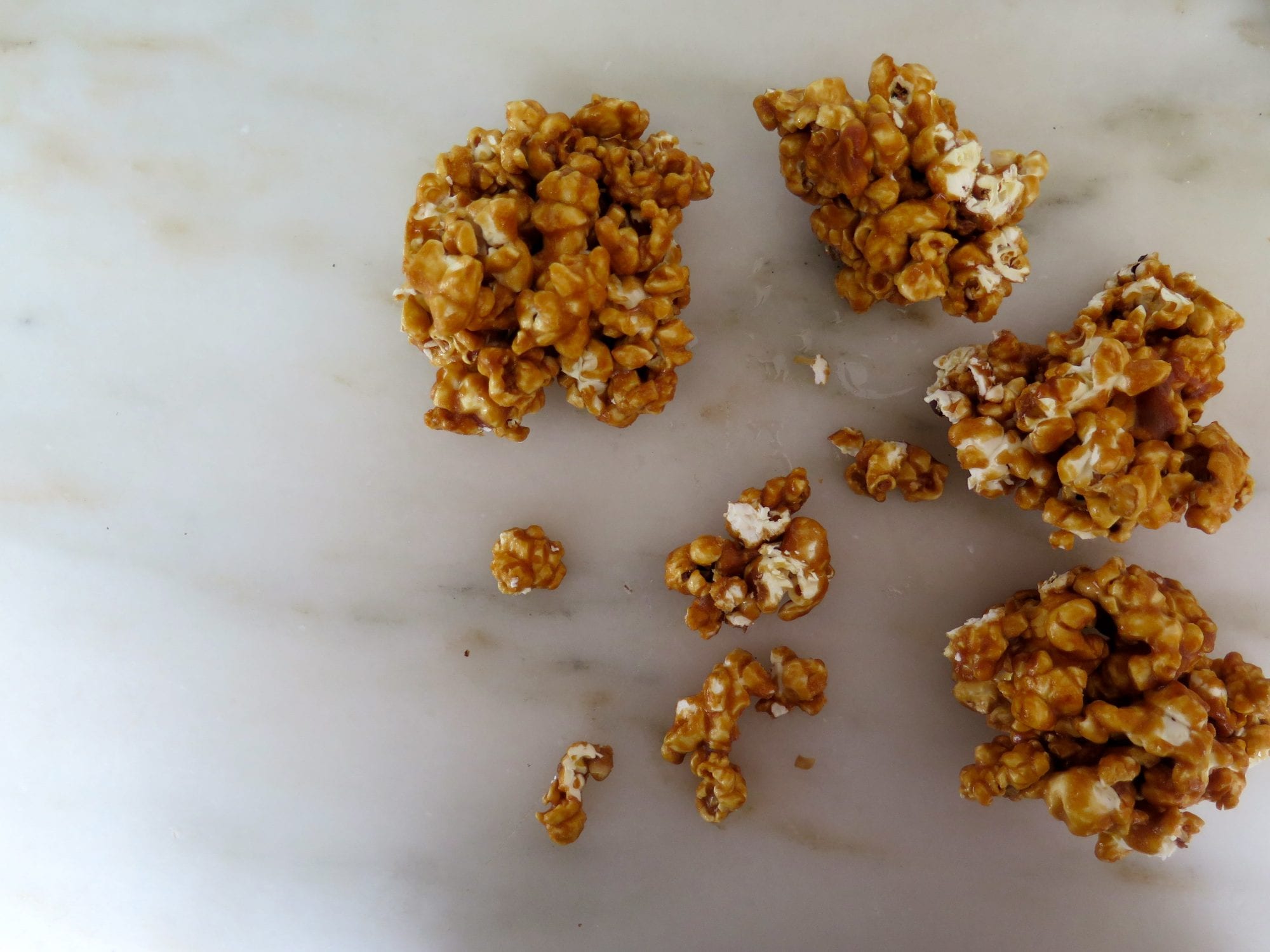 And jolly’s caramel corn recipe just screamed, “tweak me.” But before doing so, just the tiniest bit of research was in order. Yes, I had previously developed a recipe for popcorn balls for Matt and Nato, but that doesn’t mean a girl can’t look. On my book shelves, I read  Craft of Baking and Baked Explorations (I made Baked’s caramel popcorn A LOT while working at the bakery and up until now it has been my go-to). And on the internet I spent some time with several recipes, and this is what I culled: Molasses will make your popcorn taste more like Cracker Jacks (a requirement in my book), baking soda will give the caramel a lighter texture, brown sugar is the preferred sweetener, some use butter, almost none use cream, some bring to soft ball, others to hard crack, many bake the corn after coating it in caramel, a few do not. 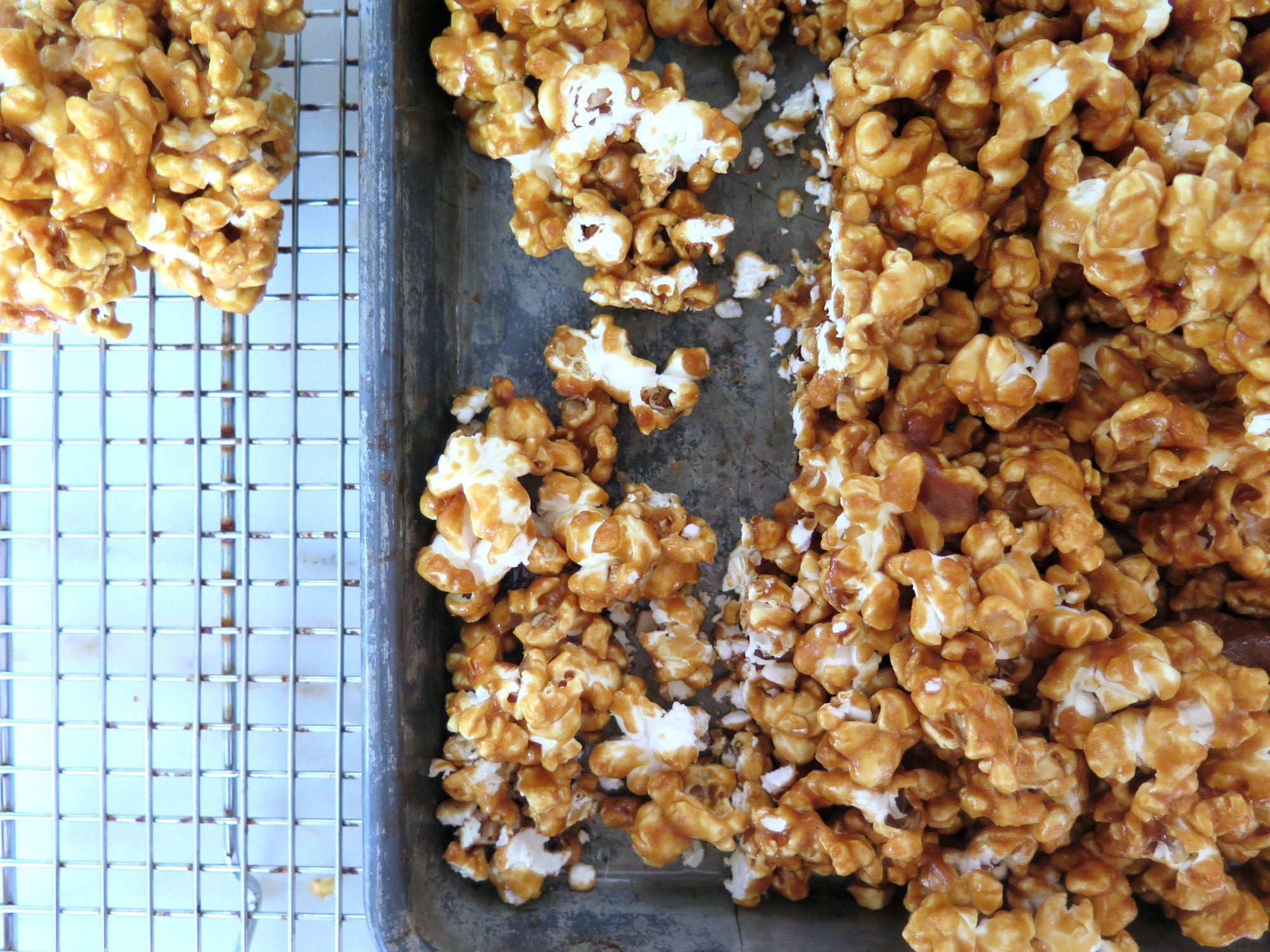 With all this in mind, I revisited the pamphlet’s recipe and tweaking began in earnest. Because I was after the molasses-y vibe of Cracker Jacks (and to pay tribute to the rejected pop corn candy recipe), I subbed a bit of brown sugar for the granulated, and used dark corn syrup, rather than light. I had no sorghum handy (weird, I know), but substituted molasses instead. I also used heavy cream rather than water (for a richer, creamier caramel), amped up the amount of butter (and used salted), substituted baking soda for the vinegar, and finished everything off with a generous amount of vanilla and kosher salt. I cooked it all to soft ball, baked it for 30 minutes and was beyond pleased with the results. Now, I get it that you may be asking yourself if the world really needs another caramel corn recipe. Well, I think I can answer that question for you. Yes, the world does, and yes this recipe should be your new go-to. End of story, bottom line. Thank you very much. 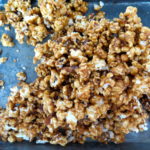 I tried making the caramel corn and skipping the step where you bake the corn for 30 minutes and I found the popcorn gets soggy quickly without the baking step.
Don't be tempted to cook the caramel at a higher temp than medium, or it will burn before it reaches soft ball.
Thanks for subscribing! Please check your inbox to confirm your subscription.
Candy Vintage Recipe Booklet-Inspired Caramel