First things first: these french toast dark chocolate ganache sandwiches are spectacular. They are crusty, yet custardy, deeply chocolate-y without being too sweet, and super easy and fast to assemble and cook. They make a great, kind of unique, dessert . . . or breakfast  . . . or lunch . . . or midnight snack. I’m not going to tell you they’ll keep indefinitely, cause that would be a lie, but, you know, they are not half bad at room temp (two of my testers were at work, aka, elementary school) when I made these one morning, and hours later when they ate them, i was rewarded with much praise, and heard nary a complaint). 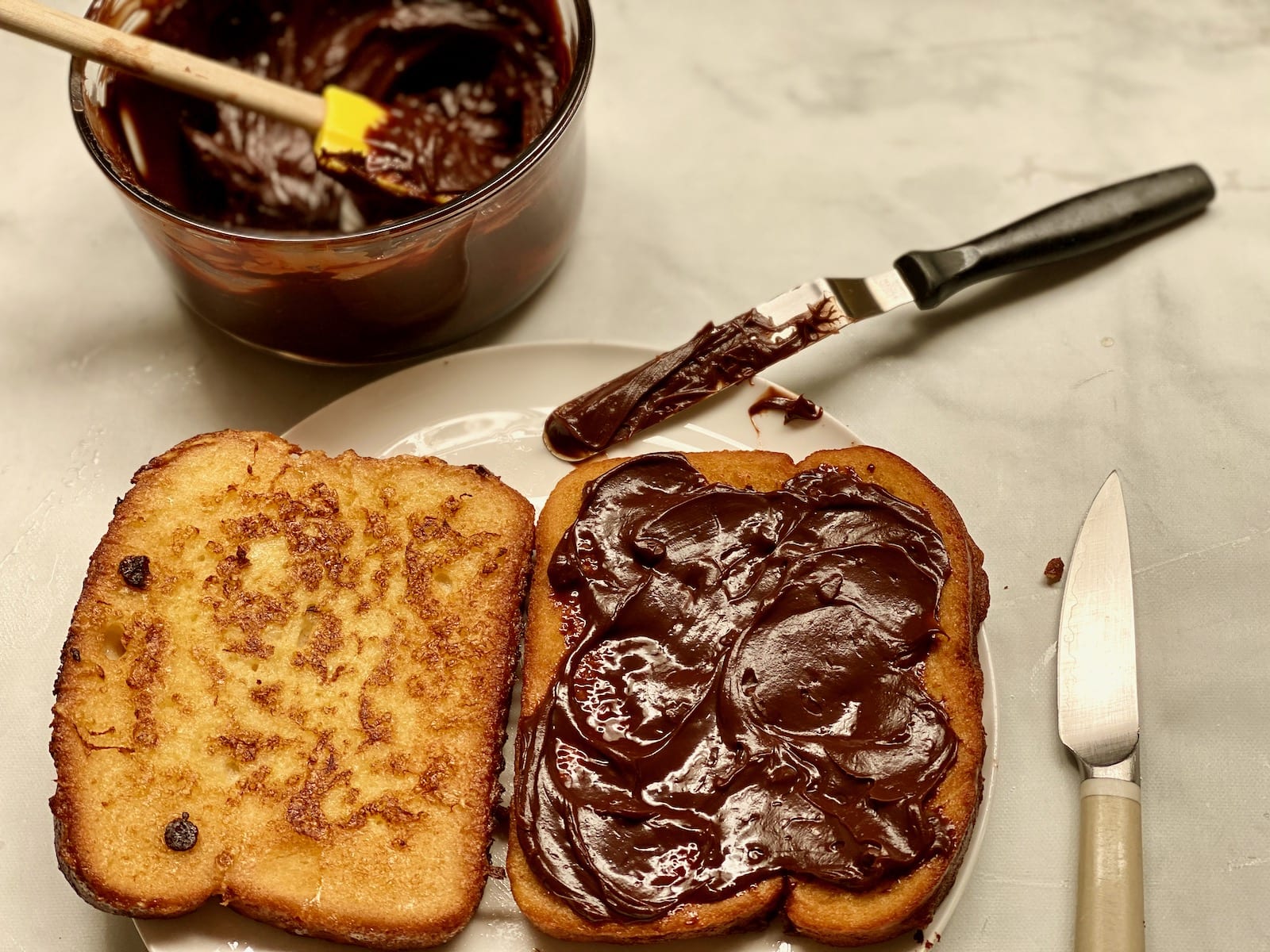 The first french toast chocolate sandwich I ever made (and, honestly, the last one I made until now) was eons ago from a Martha Stewart recipe in a 2005 issue of the now-defunct Everyday Food (a magazine I miss, by the way). I only made the Everyday Food sandwiches once, and although I loved them, I had no one to share them with at the time, as I wasn’t living with any age-appropriate testers (except for a husband who doesn’t care much for french toast). I wasn’t sure, therefore, if I had discovered some truly amazing crowd pleaser, or if it was just me super digging some treat that others might scoff at. Recently(ish), however, I saw this Food52 chocolate sandwich recipe, and was reminded of those sandwiches and inspired to try my hand at my own version. This time with the intention of getting some feedback.

Research was in order (duh), and although I discovered several grilled chocolate sandwiches, such as this recipe from Food & Wine, I did not come upon any made with french toast — an element of the Everyday Food recipe that I just loved ever since discovering the secret to the art of french toast cookery, which is to grill your egg-soaked bread in hot oil, not melted butter. However, what these grilled sandwiches lacked in terms of bread prep (they were merely prepared in a pan with butter, as you would a grilled cheese), they made up for when it came to their chocolate filling. Whereas the Everyday Food recipe merely called for sandwiching pieces of a chocolate bar between two slices of bread, these other sandwiches called for smearing the bread with ganache, and I kind of think I can stop right here. You get it, right? How it suddenly came to me that it would be completely over the top and amazing to combine the french toast from one recipe with the ganache of the others? And how the minute I realized that that was what I was going to do, I was kind of floating around in a haze of recipe development bliss? We’re on the same page here, right? 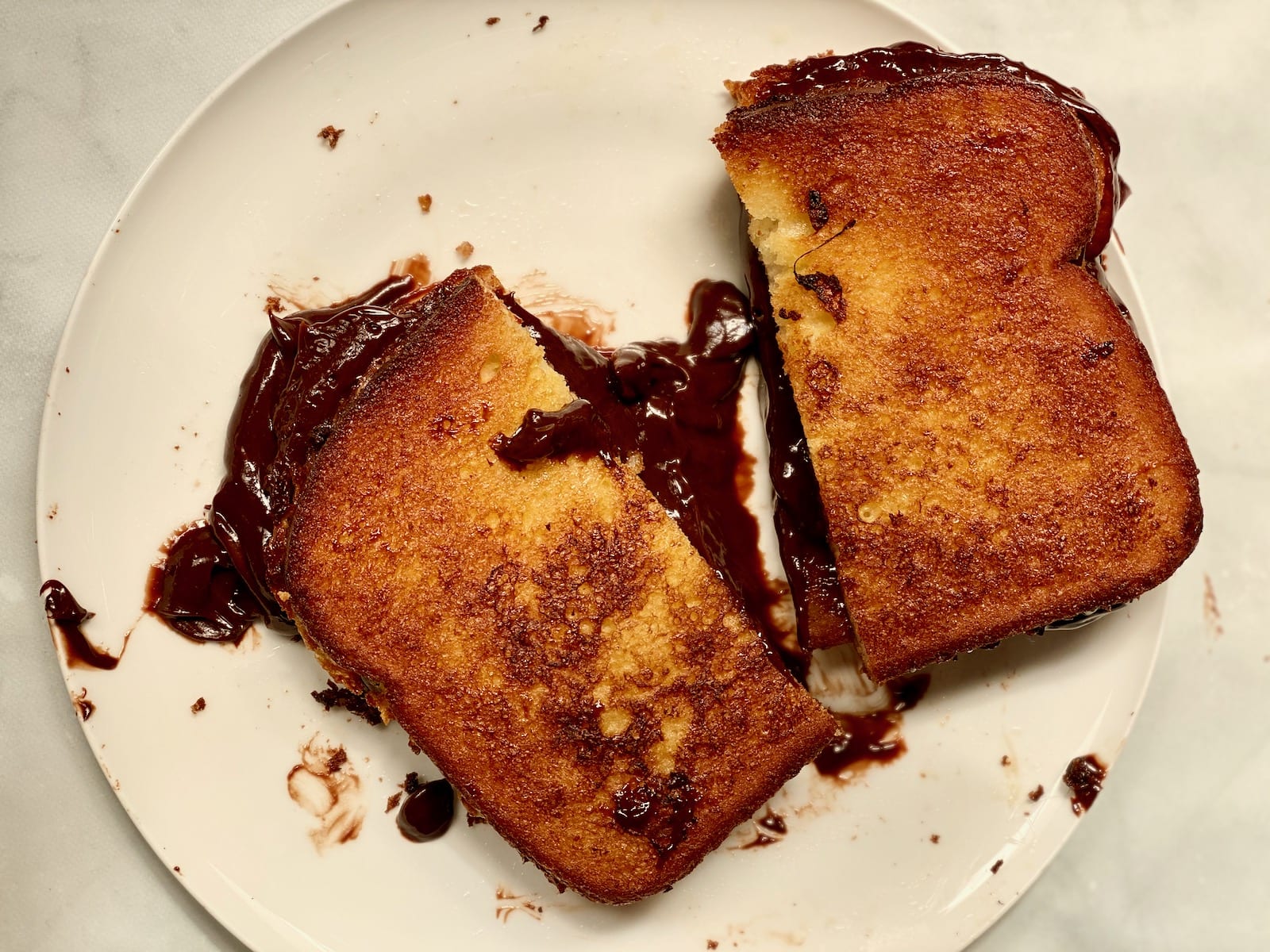 So that is what I did, and that is how the french toast ganache sandwich was born. The recipe couldn’t be easier and the results couldn’t be tastier. And this time there was plenty of feedback, and all of it enthusiastic, so, phew, it wasn’t just me back in the day digging some crazy concoction: The french toast chocolate combo really is the bomb. 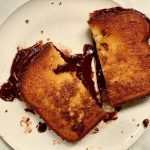 For the french toast

To make the ganache

To make the french toast