I want to tell you about the first time I had chocolate bread pudding. The story is slightly rambling and I’m likely to mix things up, talk in hyperbole, and maybe flat-out lie, so bear with me. I used to go out with this guy who lived across the street from Blue Ribbon Bakery in Manhattan, and he took me there for dessert on one of our first dates. The bakery had my kind of dessert menu: Full of sundaes and profiteroles and floats and not one, but two bread puddings. One with bananas and walnuts and one with chocolate chips, vanilla ice cream, and hot fudge. I think you can guess which one I ordered, and it was life-changing. First of all, it was huge, and, as is well-documented on this site, I love a big dessert. Second, (now here’s where the hyperbole start flying) it was the best dessert I had ever had (I warned you). The custard-soaked bread (maybe baguette?) studded with molten chocolate chips, combined with the slightly melty vanilla ice cream and warm hot fudge basically put me over the edge. It was one of those food memories that you do not forget. Ever.

Lucky for me, forgetting it was not even in the realm of possibility, as it was a dessert I treated myself to on a semi-regular basis for the next several years. (I ended up marrying the guy who’d brought me on that fateful date, moving to Brooklyn, and ordering said pudding from Blue Ribbon’s Brooklyn outpost on more occasions than I can count.) But that was a long time ago, and even though when out to eat, and if on the menu, I always order bread pudding, it has been a while since I had one that even came close to rivaling the custard-y, bread-y, chocolate-y perfection that is Blue Ribbon’s. That is, until now. 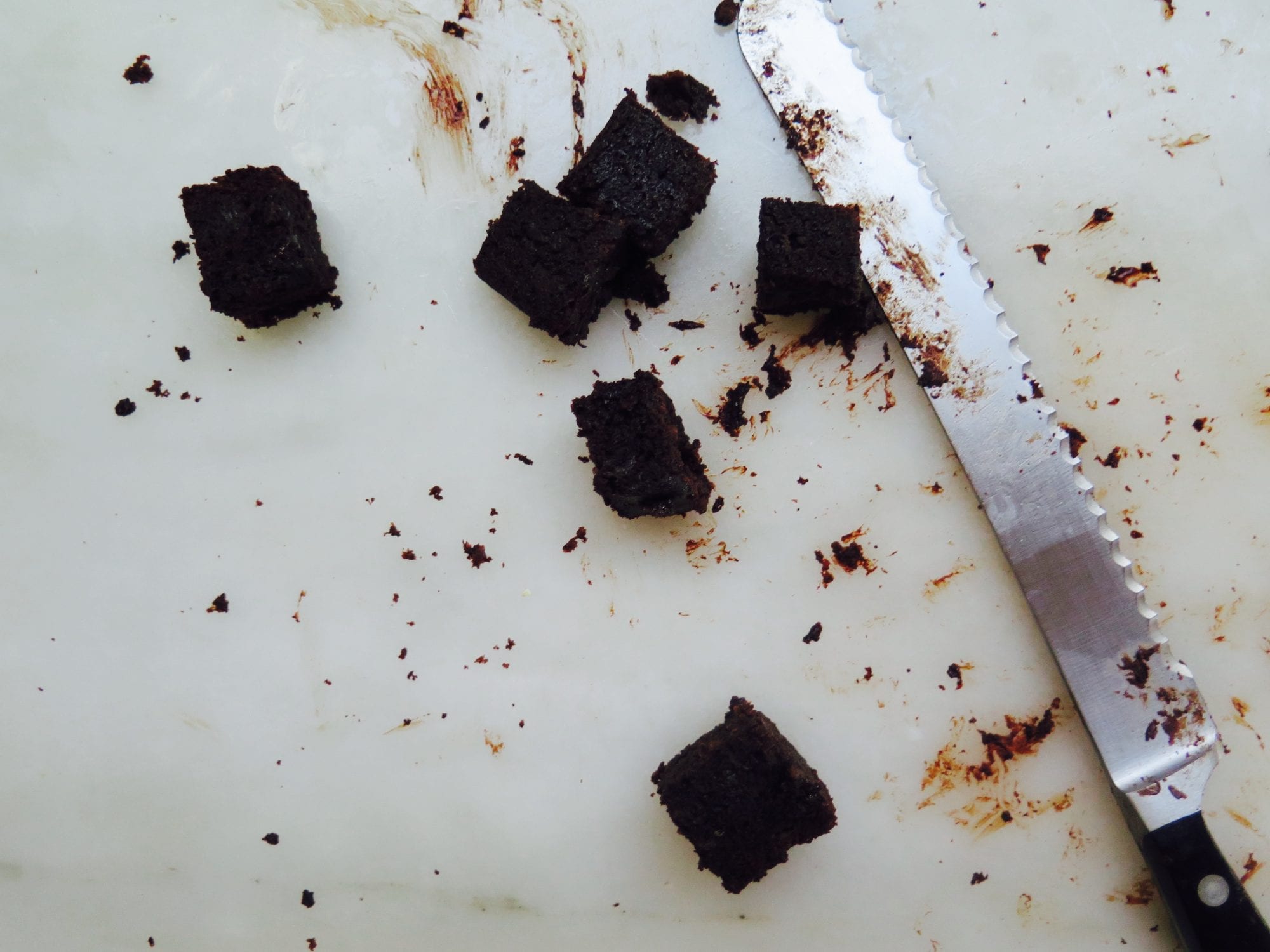 My chocolate banana-bread bread pudding might even be better than the aforementioned, and that’s not even taking into consideration what it might be like with a scoop of vanilla ice cream and chocolate sauce. I just serve mine with a dusting of confectioner’s sugar and a dribble of heavy cream, but here’s the thing about mine that kind of/sort of puts it in a class by itself: The bread component of the pudding is an uber-yummy chocolate banana bread that you make prior to pudding time. I know, I know, “how can I even be asking you to make banana bread and THEN use said bread in a pudding??” I’m asking a lot, I get it. but here’s the thing: Banana bread is super easy and fast to make and the recipe makes enough for two loaves (one for your pudding and one for your freezer or counter). And I’m just hear to tell you that toasting up cubes of this bread and tossing it with a brown sugar-sweetened, vanilla-scented custard and additional banana coins is kind of to die. Oh, and no, I do not live under a rock and so, yes, I do know that the Smitten Kitchen double chocolate banana bread is everyone and her mother’s favorite, but you know what? Mine’s good, too, and I think the world is ready for two great chocolate banana breads. I just do. 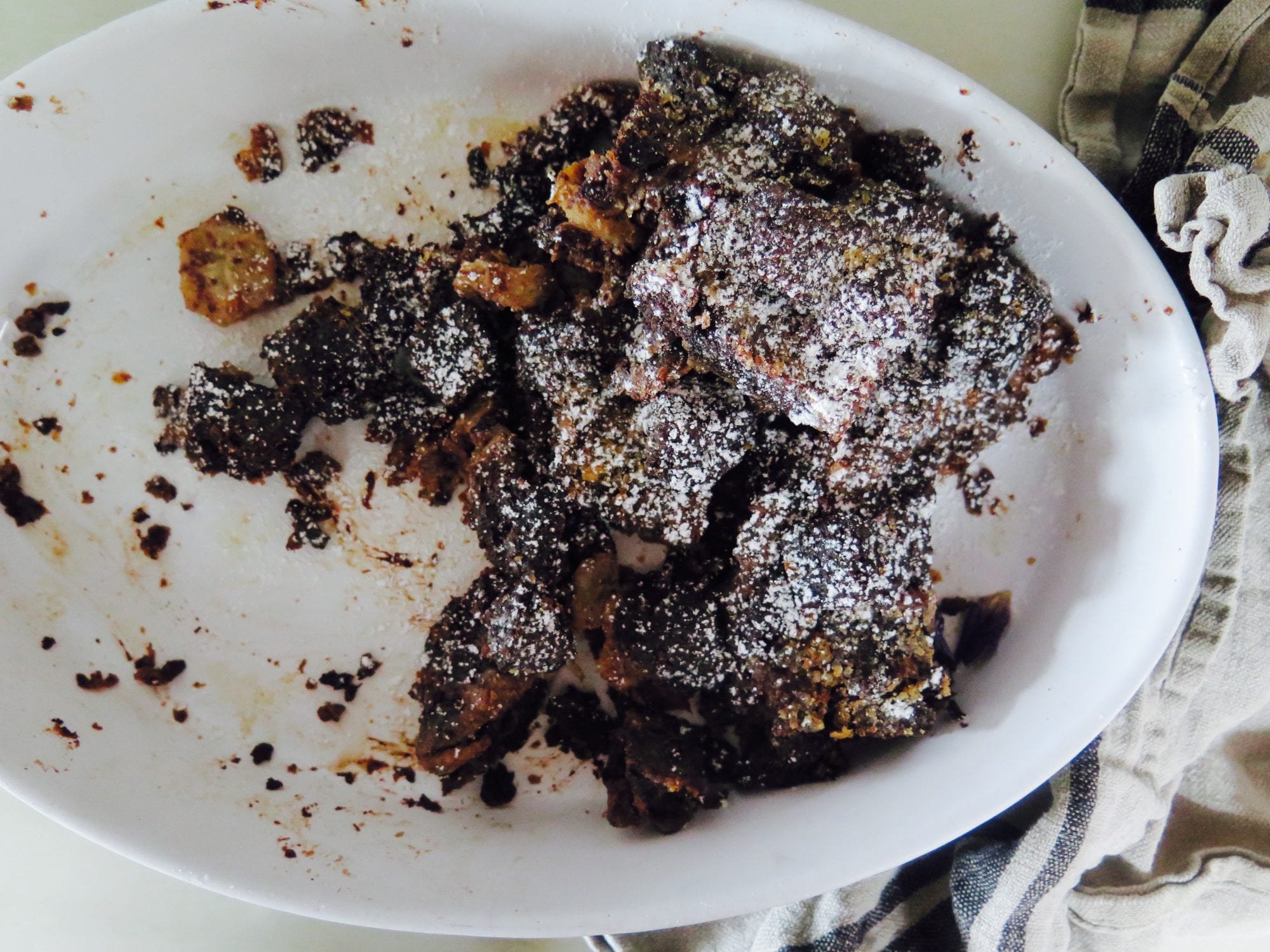 Now, I realize this post is a bit of a departure from prior ones, as I am not giving you copious details about my recipe development process, but please do let me know if you are curious about why I added or didn’t add a certain ingredient, or what inspired or influenced an ingredient or method choice, because I do love a nerdy chat. And just so you know what I perused in the making of this post: For the banana bread, I looked at Food Network, Smitten Kitchen, and Simply Recipes (among others, I’m not going to lie). And for the custard and over-all technique I looked on In Style to a bread pudding I had developed previously. That’s all I’m going to say except that if you like banana bread and chocolate and consider yourself a bread pudding fan (and i really hope you do), this might just become your new favorite dessert. Whether you eat it with ice cream or on a date, matters not.

To make the chocolate banana bread

To make the custard

To assemble the bread pudding