Coconut layer cake may be just about my all time favorite cake. ALL time. Yes, I love a chocolate cake with a vanilla buttercream, and a vanilla cake with a chocolate buttercream, but I truly adore a coconut cake. And making the coconut layer cake of my dreams (intense coconut flavor in both the cake layers and the frosting, super moist cake, layered with super light and creamy frosting) has been on my bucket list for a good while. Yes, I have dabbled in developing coconut cakes of the non-layer variety, such as a coconut sheet cake for Matt and Nato and a coconut cake with meringue and coconut cake bars (aka coconut flavored lamingtons) for this here blog. But this is my first attempt at creating a coconut layer cake and, at the risk of being a little braggy, it’s sort of, kind of, totally amazing. 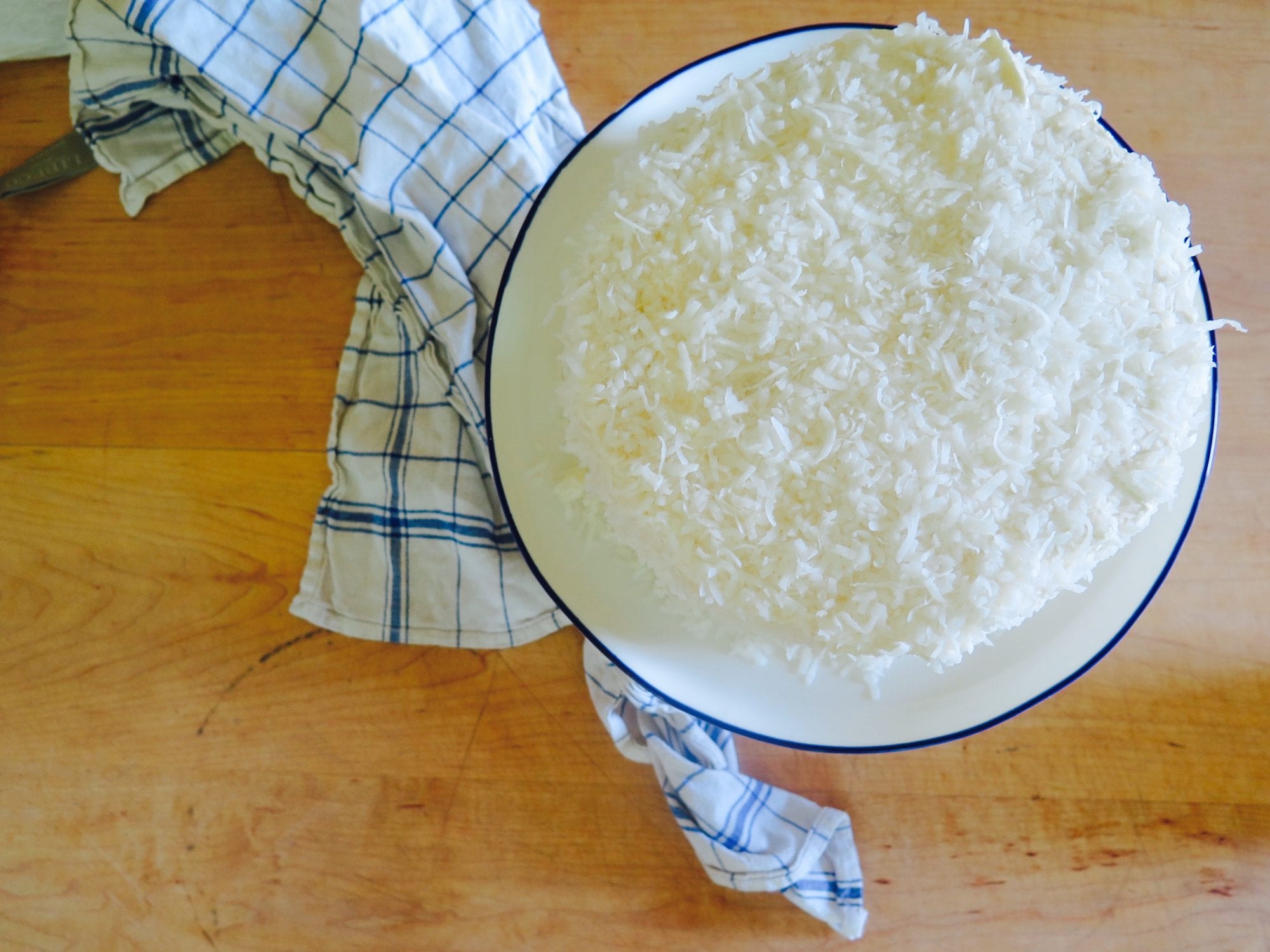 Now, the timing of the making of this cake was not a product of chance. A few weeks ago, on July 4th, I shared a spectacular coconut cake (won at a cake Sharon Historical Society auction, no less) with a group of friends that was so exactly the coconut cake of my dreams that I was at the computer and emailing the person who donated the cake to the auction inquiring about the recipe within a few hours of eating it. The recipe arrived in my inbox shortly thereafter, and the recipe-development nerd in me immediately noticed something most uncanny. The auction cake recipe was practically identical to a coconut cake recipe from Vogue that I have been harboring fantasies about for some time now. To say that I loved the happenstance of having bid on a cake whose recipe was not unlike one that had caught my fancy years earlier would be an understatement. Development of my own recipe promptly ensued.

I began by closely comparing the auction cake and the vogue one. although there were more similarities between the two recipes than differences, i focused on what set them apart: the vogue cake called for more butter than the auction one, and because i wanted to use coconut oil, both because it would amp up my coconut flavor and add moisture (as all oil is want to do), i added coconut oil to my own recipe. the vogue recipe used super fine sugar, rather than regular granulated, and i did the same (having recently read a great deal in my vintage recipe pamphlets about how nicely a finer sugar creams with butter). as for my cake’s liquid, again, my thoughts turned to my recipe pamphlets and how they touted the power of water as a cake tenderizer. since the auction cake called for a bit of it, AND baked’s coconut cupcakes do as well (really, all baked’s vanilla cakes do), i decided to go in that (seemingly counterintuitive!) direction as well. i also added a bit of whipped heavy cream, as i was taught (and so too was jeffrey steingarten at vogue) to do so by shirley corriher. 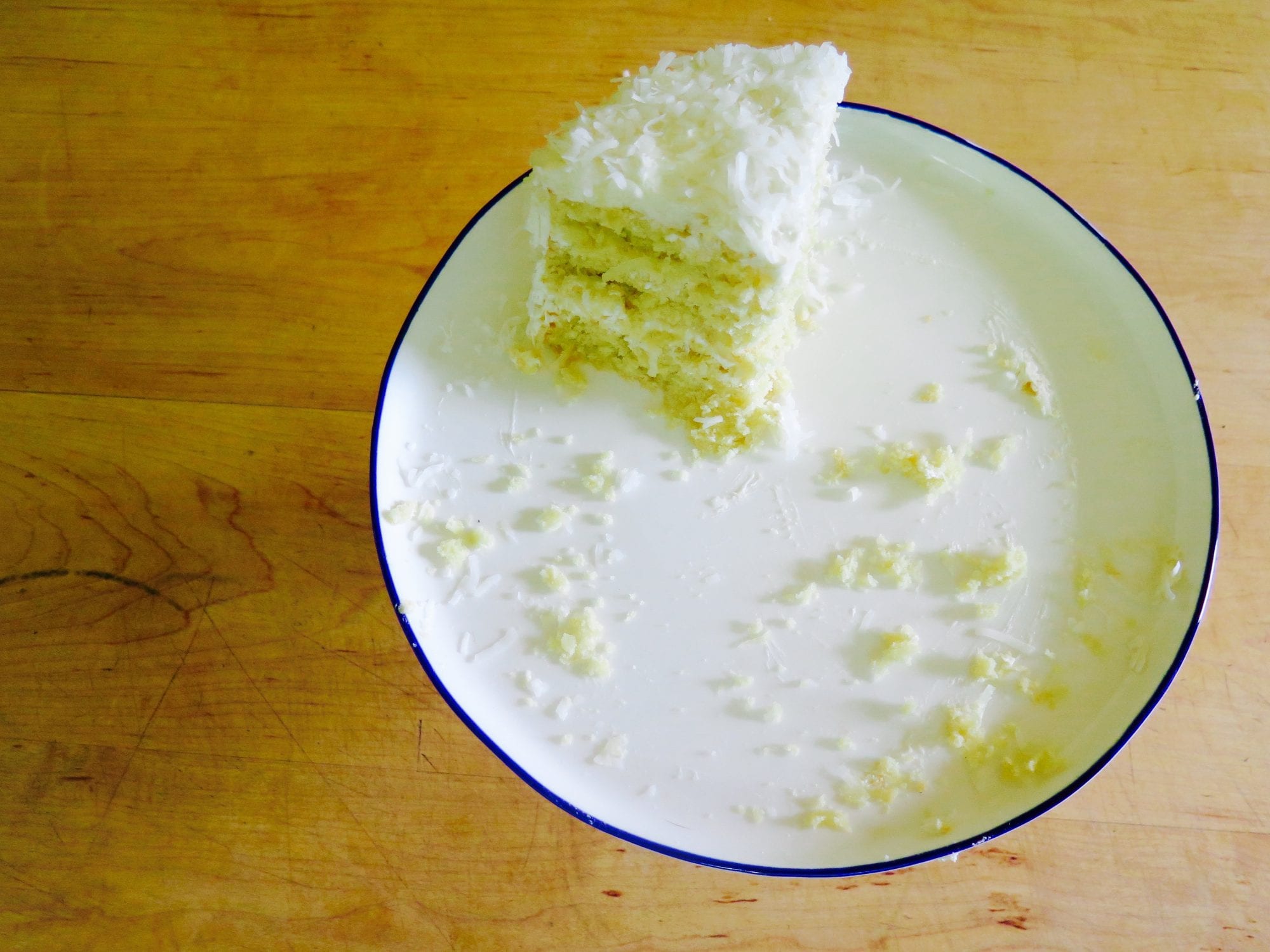 I added shredded sweetened coconut to my cake as well, as I had done when I made my meringue covered coconut cake, and I added plenty of coconut extract, as I had done when I made my lamingtons. I used a bit of cake flour, in addition to all purpose, perhaps as a tribute to all of the Swan’s down cake flour pamphlets I’ve been reading, and I turned with much excitement to the developing of the coconut frosting. The auction cake’s frosting had tasted as light as air, but it’s recipe bore no resemblance to Vogue’s. In fact, the frosting on my auction cake was what many refer to as a “boiled milk frosting” and was essentially the recipe baked uses to frost its cakes (milk and flour are cooked on the stovetop til a loose pudding-like paste forms, the paste is cooled and then added to the sugar and butter). No idea why it has taken me this long to develop a recipe for and to use such a frosting, but now that I have done so, not sure I’ll be adding anything else to the frosting rotation . . . ever again. And finally, I brushed my layers (prior to frosting) with a coconut simple syrup for added moisture insurance. Enough said. If you are a lover of coconut or even someone who feels sort of lukewarm about coconut, I entreat you to give this cake a whirl. It’s an auction-worthy winner and the bidding amongst your guests for the largest piece, will inevitably be high. 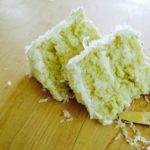 For the coconut cake

For the coconut simple syrup

To make the cake layers

To make the simple syrup

To make the frosting

To assemble the cake

Thanks for subscribing! Please check your inbox to confirm your subscription.
Cakes Frosting Coconut

I can not wait to try this recipe out! Sounds and looks divine 🙂

am so glad to hear that! and now you know the “secret” to the most amazing frosting ever . . .

This looks absolutely amazing, and my whole family adores coconut cake. Can’t wait to try it (and will report back!).

Finally made this for my husband’s birthday, and it was FANTASTIC. Every element worked. I was worried that it would be hard to fold the whipped cream into the rest of the batter, but it worked well. The frosting technique was new to me, and it made a delicious stable frosting that was light in texture and complemented the cake beautifully. I added some lemon curd between the layers for a little contrast. Will make this many times. Thanks, Jessie.

so glad to hear it was a success! the frosting technique is one we always used at baked, and i just love the results. hope your husband was pleased . . .