It’s no secret that I have a soft spot for a cake made from a mix. I went into some detail about my love for boxed cakes here, but what I have not yet shared with you is my affection for a particular cake-mix cake — one that is no longer available, and one that I ate growing up (and by “growing up” I mean before, during, and after college). The cake in question was Betty Crocker’s Stir’n Frost and it appealed to me on a myriad of levels: It was an incredibly delicious fluffy, moist cake, with creamy sweet frosting (I was partial to the chocolate one with the vanilla icing). It came with its own pan, AND with a packet of frosting. You made the cake right in the pan by adding water to the mix and stirring (hence the name) and then frosted it with the packet once it emerged from the oven. Truth be told, I ate many a Stir’n Frost cake when it was still warm and the frosting kind of melty (umh, yum). This chocolate sheet cake with old-school buttercream frosting is my ode to the Stir’n Frost.

Funnily enough, and as is often the case, I did not actually set out to recreate the Stir’n Frost when I began developing this recipe for chocolate sheet cake. Quite to the contrary. The inspiration for this cake came at one of my many (okay, three) events for Icebox Cakes, when a woman in the audience raised her hand during the Q&A to tell me about her favorite chocolate cake recipe: The deluxe devils food cake recipe on the side of the Pillsbury Softasilk Enriched & Bleached Cake Flour box. I had been regaling the crowd with stories of my love of old recipes, particularly those from my collection of vintage recipe pamphlets, and she wanted to share her favorite old-school recipe, too. Of course, I immediately filed her’s away as a recipe that I needed to try (and by “try,” I mean analyze the recipe to determine what was special about it, what was not special about it, and what I could tweak to make it even more special). 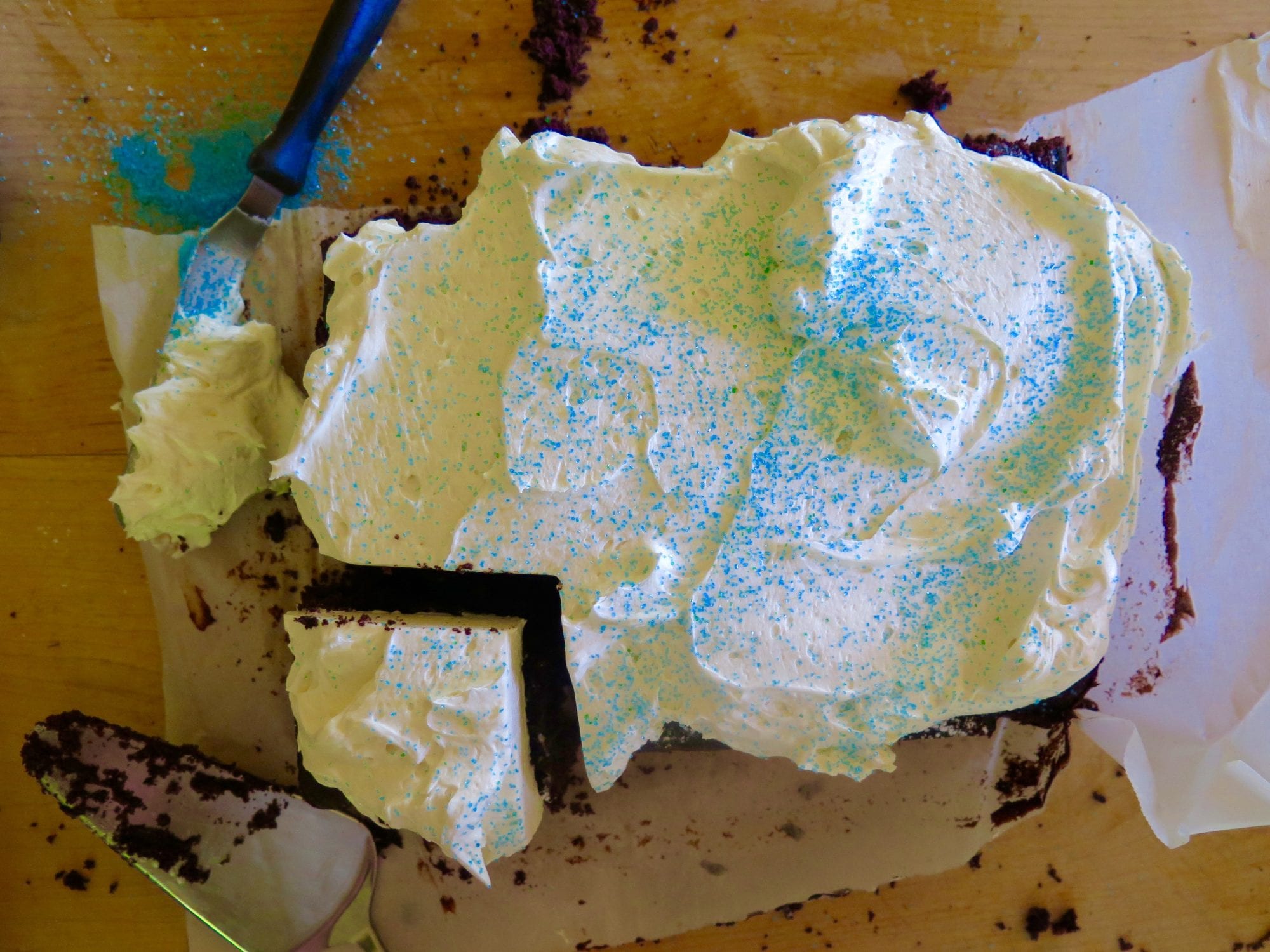 Analysis began almost immediately (yes, i move fast) and this is what I discovered: There was much overlap between the Softasilk recipe, my own extra moist and chocolate-y birthday cake recipe, and  Barefoot Contessa’s Beatty’s chocolate Cake recipe, a superb chocolate cake that i’ve never actually made, but have eaten. Yes, there were some differences. Barefoot’s and Softasilk’s call for buttermilk as the liquid, and Barefoot’s and mine call for oil as the fat, but in the most general of ways, the proportion of ingredients to one another and the kind of ingredients matched up pretty closely. (All three cakes use about the same amount of flour, cocoa powder, sugar, and eggs.) Admittedly, my birthday cake uses a tad more sugar and eggs than the other two, but there’s no surprise there.

Long story short, as I began tweaking the Softasilk recipe (subbing some brown sugar for the granulated, adding a yolk, and some lightly whipped cream, among other things), thinking about what frosting I might ice my cake with (my old-school buttercream), and what shape I might bake it into (sheet cake), memories of the Stir’n Frost cakes of my childhood came flooding back. That’s when I knew this cake would be fluffy, not dense, with a thick layer of sweet and dreamy frosting. So, whether (like me) you remember Stir’n Frost cakes vividly, or (unlike me) have never had the pleasure of enjoying one, I promise this cake is for you.

To make the cake

To make the frosting

Almond extract is called for in the Softasilk recipe. I used a teaspoon the first time I made this cake and found it to be a little overwhelming. I like it with a 1/2 teaspoon, but if you're not super into almond extract, omit it. Extra frosting will keep for a week on the counter in an air tight container, or you can place it in the refrigerator for up to a month.
Cakes Frosting Chocolate