First, I have an admission. References on this site as to how I did not grow up eating homemade birthday cake, how my childhood home never smelled of freshly baked pie, about how I ate Drake’s Devil Dogs and Pepperidge Farm raspberry turnovers and Double Stuf Oreos in abundance, with nary a homemade baked good in sight, are plentiful. And for the most part, I’ve been telling the truth. However, my mom’s apple brown betty was the exception to the rule. She made it from scratch, she made it often, and I devoured it. 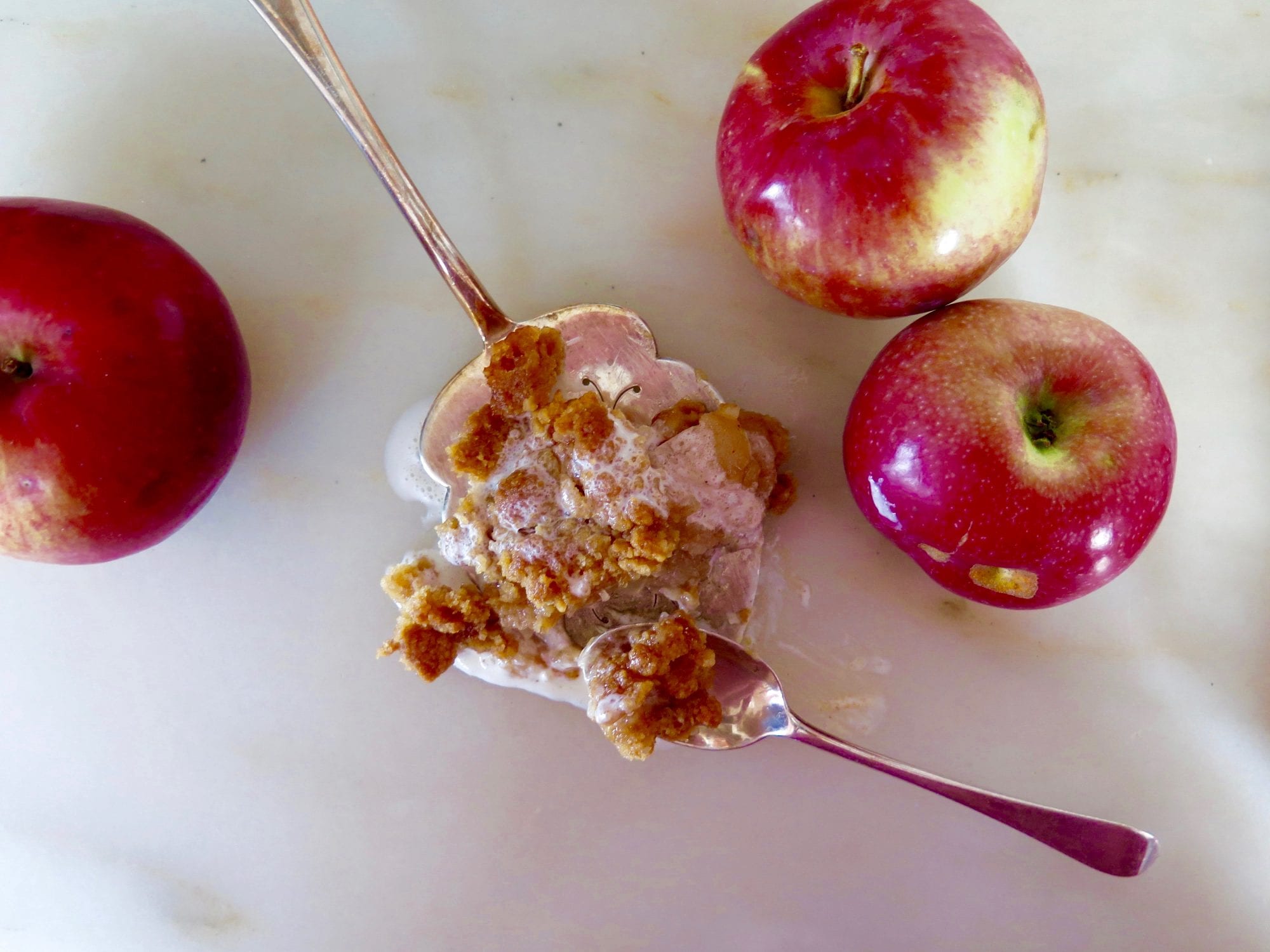 But I know what you’re thinking: these pictures are of an apple crisp, not an apple brown betty (the crumble topping of an apple brown betty is traditionally made from bread crumbs) and you’re right. What my mother made for me growing up, and what I have photographed here, is most definitely an apple dessert of the crisp or crumble variety. However, I’m just going to take a bit of poetic license here, in the interest of nostalgia. We called it apple brown betty when I was little, and I’m going to call it that here today (however, if you’re really jonesing for a traditional apple brown betty, check out Martha Stewart or Epicurious). 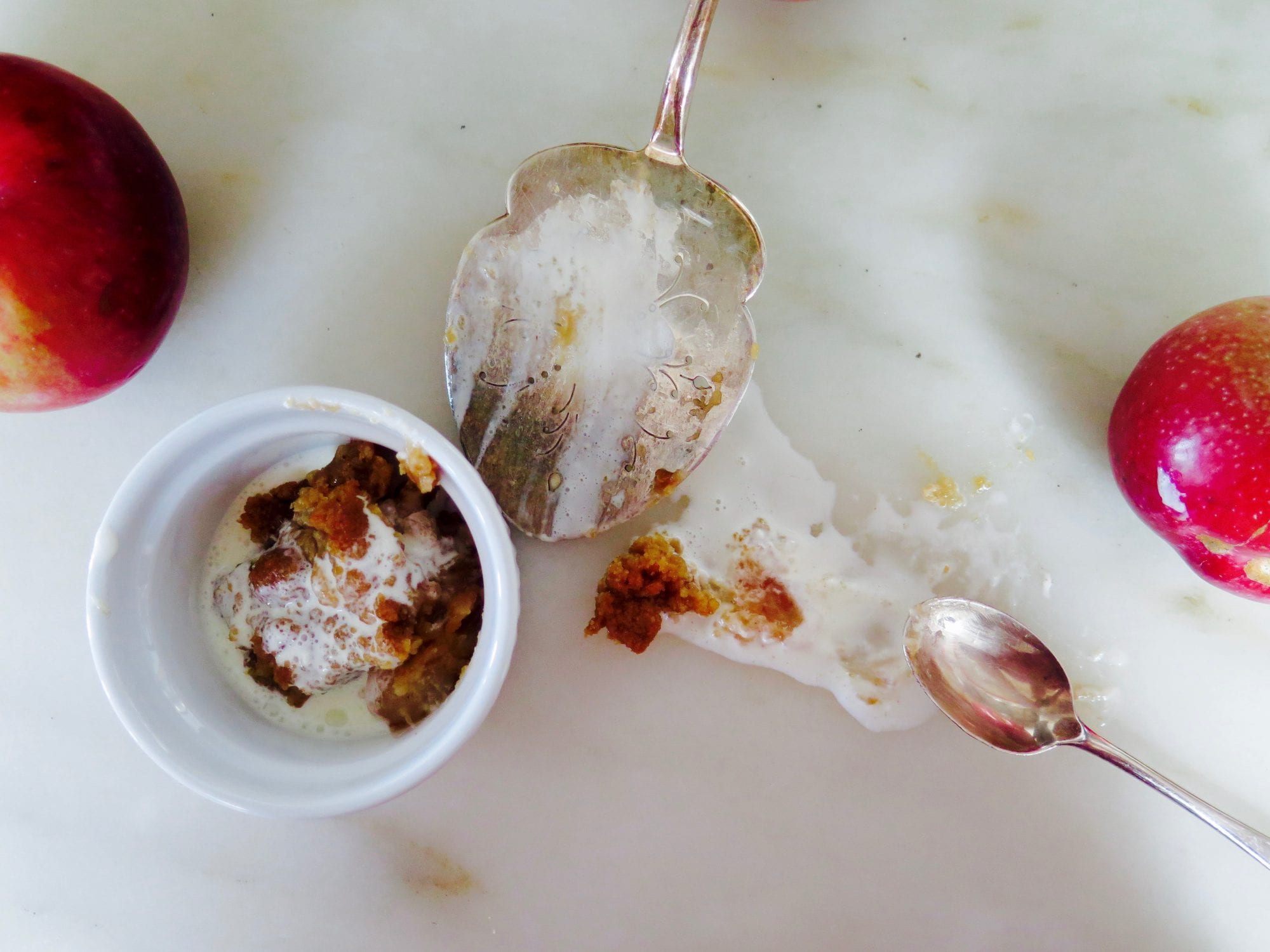 I used my mom’s recipe as a jumping off point when developing the “apple brown betty (ish)” I present you with here, as her’s is pretty standard: apples, sugar and a bit of water, covered in crumbs of butter, sugar, cinnamon, salt and flour. Although I was pretty sure I knew exactly how I would tweak the “betty” of my childhood, I did check out a couple of crisp recipes just to make sure I understood the apple crumble/crisp landscape. I looked at this apple crisp recipe and got kind of excited about using sugar in the raw in my recipe. And then I looked at a recipe called “the perfect crumble”, and the raw-sugar-writing was on the wall. I mixed my apples with water, but also lemon juice, added a thickener (arrowroot), granulated sugar, and, in addition to cinnamon, a little nutmeg. For my crumb, I kept it simple: butter, flour, and two sugars: turbinado (aka sugar in the raw) and light brown. As I assembled my betty, I kept the crumbs large, as I prefer that to a sandier crumb. And the results? Sublime. The apples tasted of fall and were perfectly toothsome. The topping was not only buttery, with caramel-y tones, as well, but the turbinado gave the crumbs the most wonderful fall crunch. Call it a crisp or a crumble if it makes you happy, but this is a simple, easy, and tasty (betty) worth trying. 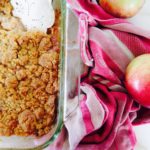 To Prepare the apples

Thanks for subscribing! Please check your inbox to confirm your subscription.
Crisps/Crumbles Fruit Desserts Apple