Chocolate caramel tarts and I have kind of a long history. About 10 years ago I read about this caramel chocolate bar, in Bon Appetit, and became mildly obsessed. The recipe, like all those I hold near and dear, was super easy, calling for a simple shortbread crust, a thick layer of sweetened condensed milk-based caramel, and a chocolate topping sprinkled with sea salt. I made this recipe a lot, and even developed a version of it (the “twix bar”) for baked. Cut to a couple of thanksgivings ago when my cousin shared her recipe for apple sour cherry pie with me, and inadvertently included her recipe for a chocolate, pecan, and caramel tart in her email. 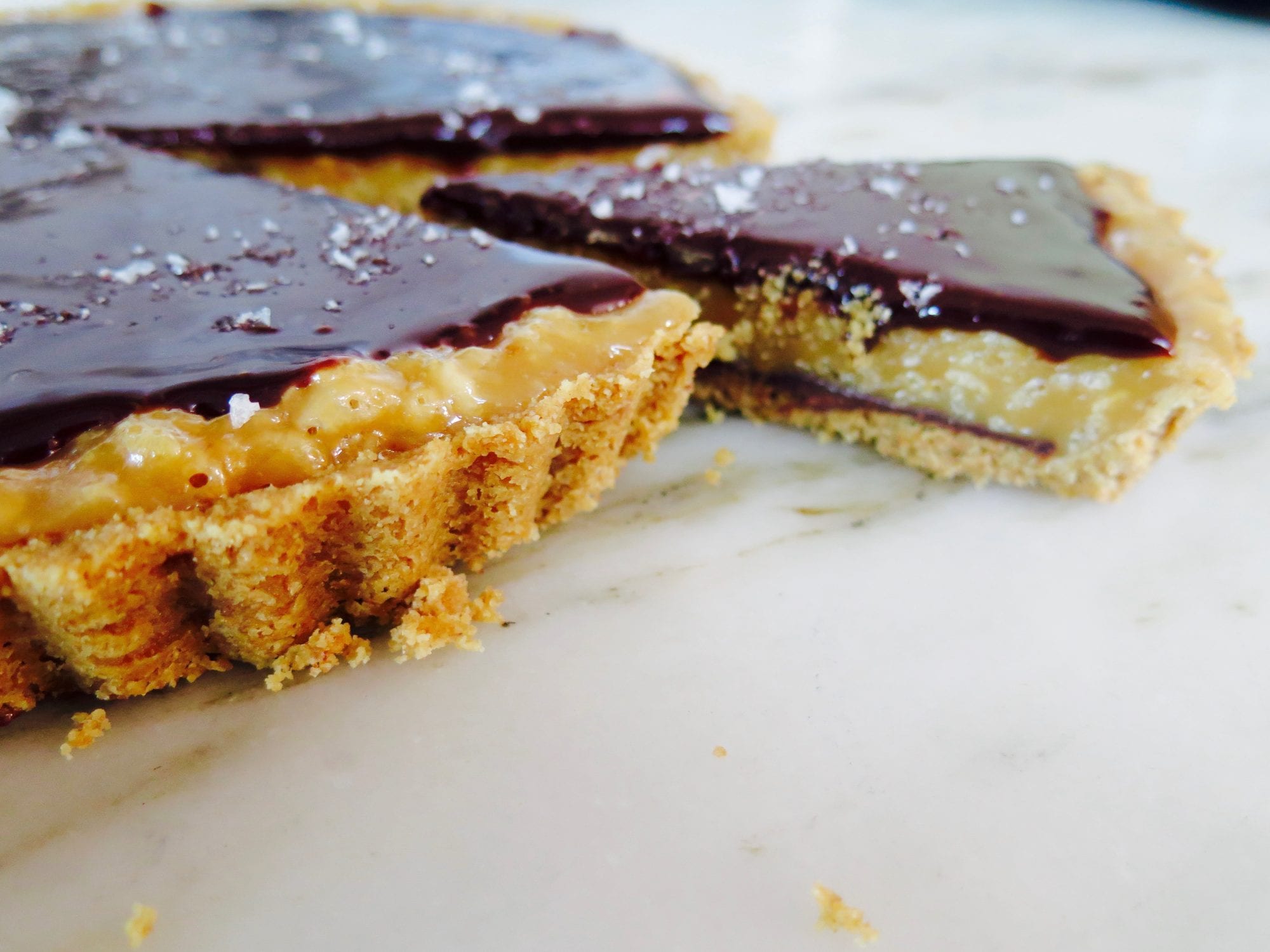 Her tart recipe made me think of my beloved bar (obvs), and I immediately switched Thanksgiving dessert gears, made the tart, and tabled the pie. Big surprise, it was a huge hit (think large piece of turtle candy). So much so, in fact, that when working on a recipe development job several months later, I developed a caramel chocolate tart (sans pecans) inspired by my cousin’s candy-like one, and learned much about said tart’s iconic status along the way. The caramel chocolate tart was (supposedly) first created by Claudia Fleming at gramercy tavern (and is found in her book) and a version of it is served nightly at Brooklyn’s Marlowe and Son, to much acclaim. 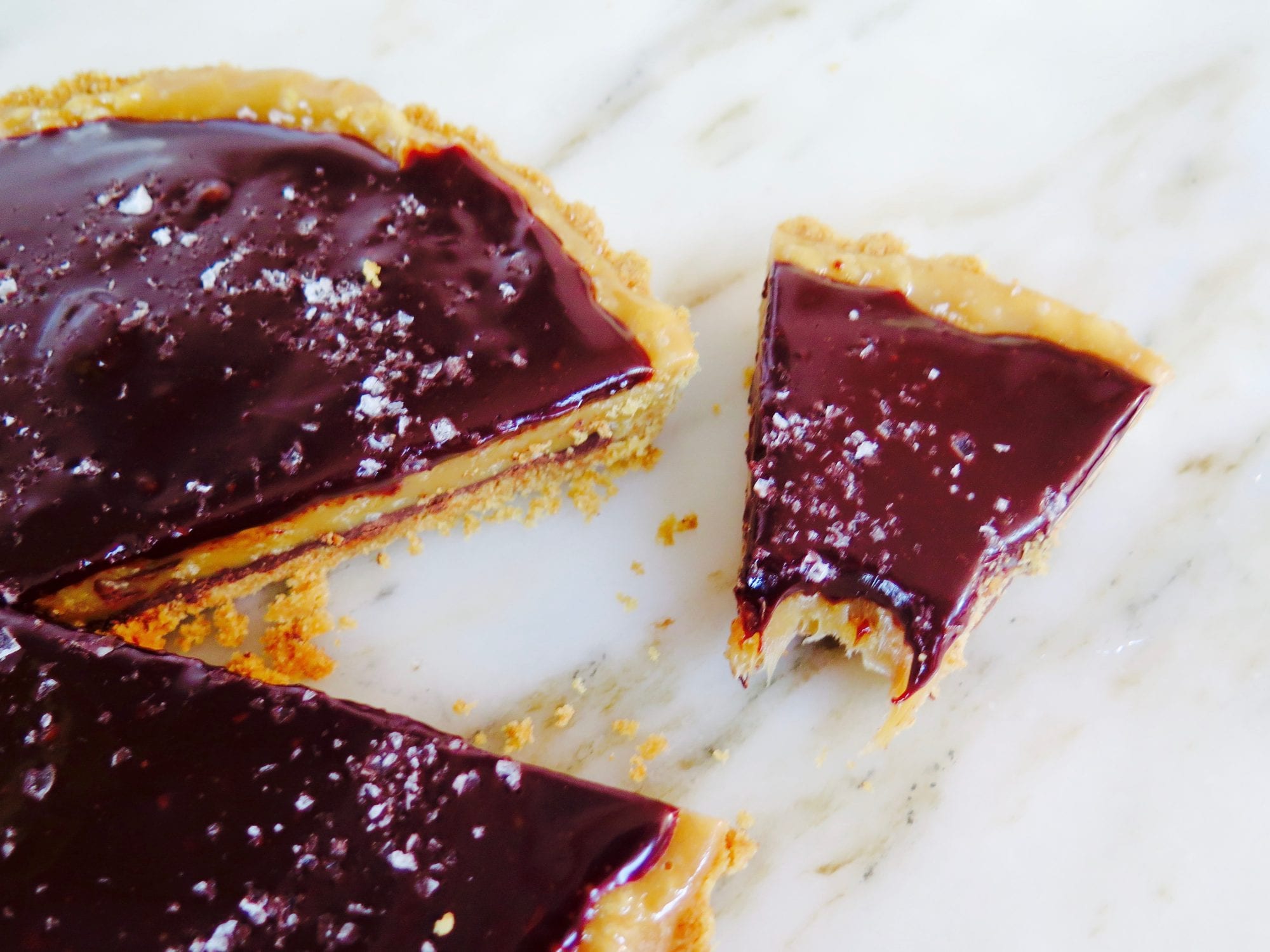 Iconic or not, this holiday season it seemed like high-time to put my stamp on this tasty and popular treat. Here’s what I knew: my crust would be cookie-based like my cousin’s recipe, and not a chocolate sweet-tart dough like the Claudia Fleming/Marlowe ones. I chose digestive biscuits over graham crackers, however, as digestives are my personal fave for crusts. Said crust would be coated in bittersweet chocolate (again, like my cousin’s recipe). My caramel would have a bit of sweetened condensed milk in it (like in the bar, described above, that I was so fond of). Milk chocolate (and sea salt) would top the tart. What I didn’t know is how I would make the tart stand out. That is, until I looked in my pantry for inspiration and focused in on a box of Rice Krispies . . . . The combo seemed so brilliant and yet so obvious — a caramel krispy filling?? Genius. But would it work? Would the Rice Krispies get soggy? Would they retain their cripiness in the caramel? 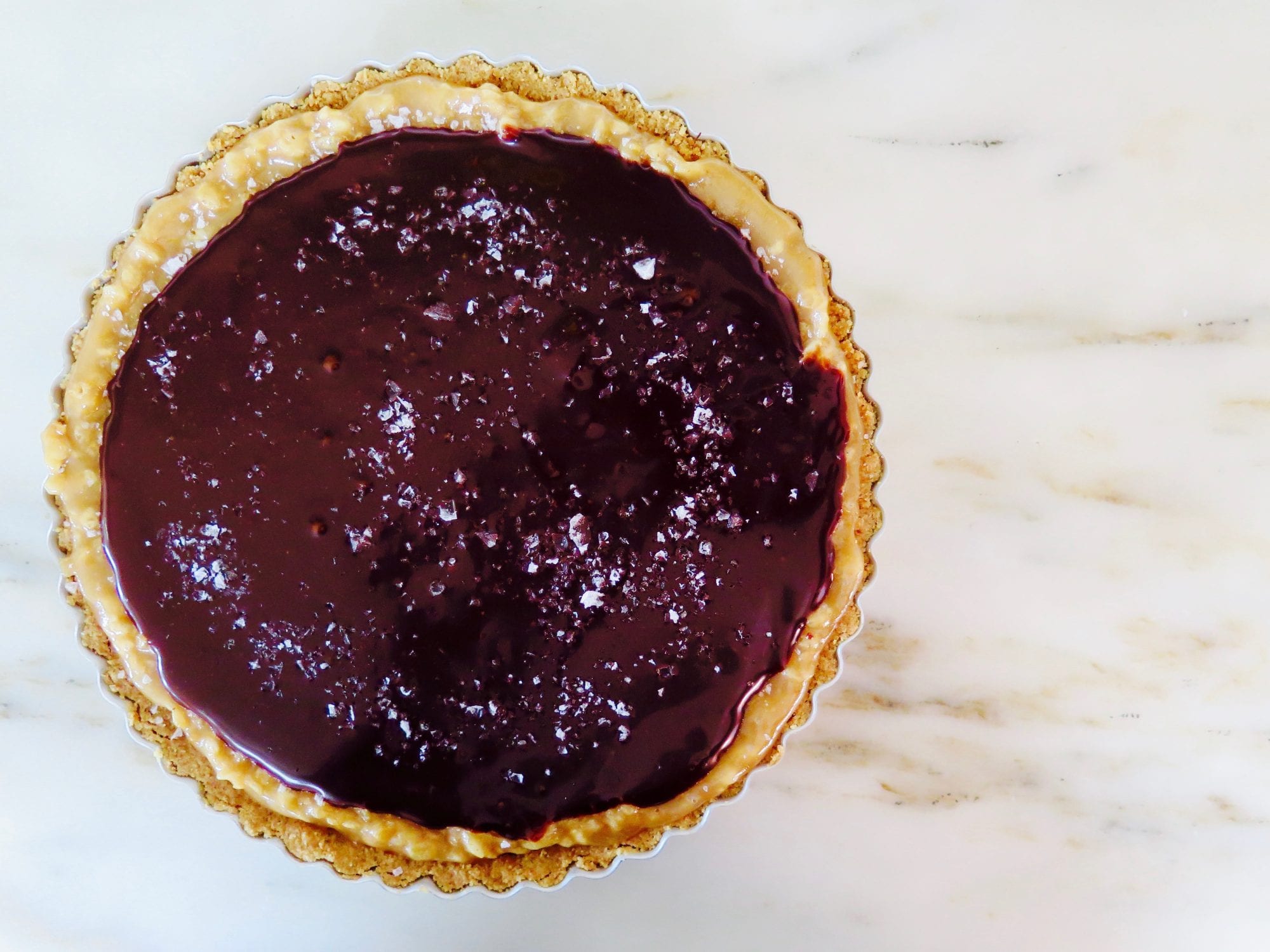 I hightailed it my computer to see if others had concluded that caramel and breakfast cereal were a match made in heaven, and if they had, to see how things had unfolded. Testing and tinkering began in earnest, and I could not have been more pleased. The Rice Krispies perfectly cut the sweetness of the two chocolates and the caramel (which also benefited from a hefty glug of vanilla and Maldon sea salt). Plus, the Rice Krispies gave the tart the most amazing and unexpected texture. My recipe is easy (just the way I like them), not terribly time-consuming, and the perfect combo of sweet, salt, and crunch. Think watchamacallit bar (without the peanut butter) and think yum. 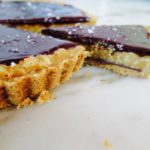 For the Milk Chocolate Ganache

To Make The Crust

To Make The Caramel

Thanks for subscribing! Please check your inbox to confirm your subscription.
Pies Caramel Chocolate