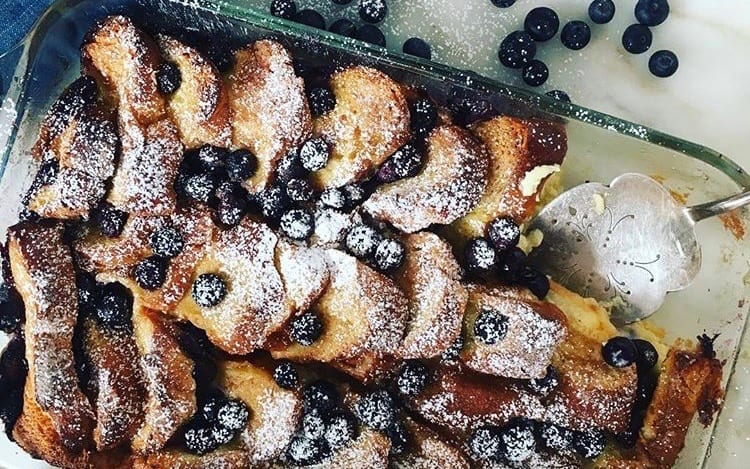 Some back story: A soon-to-be 13-year-old taste-tester that I know celebrated his birthday early with a sleepover party back in June, and he requested baked french toast for the morning after. Usually I make my cinnamon buns for both him and his brother for special occasion breakfasts, but who was I to argue with an almost-teen? As I understand it, one is supposed to keep conflict to a minimum. And, duh, I was thrilled to have an opportunity to develop one of my all time favorite things for one of my all-time favorite testers/humans. 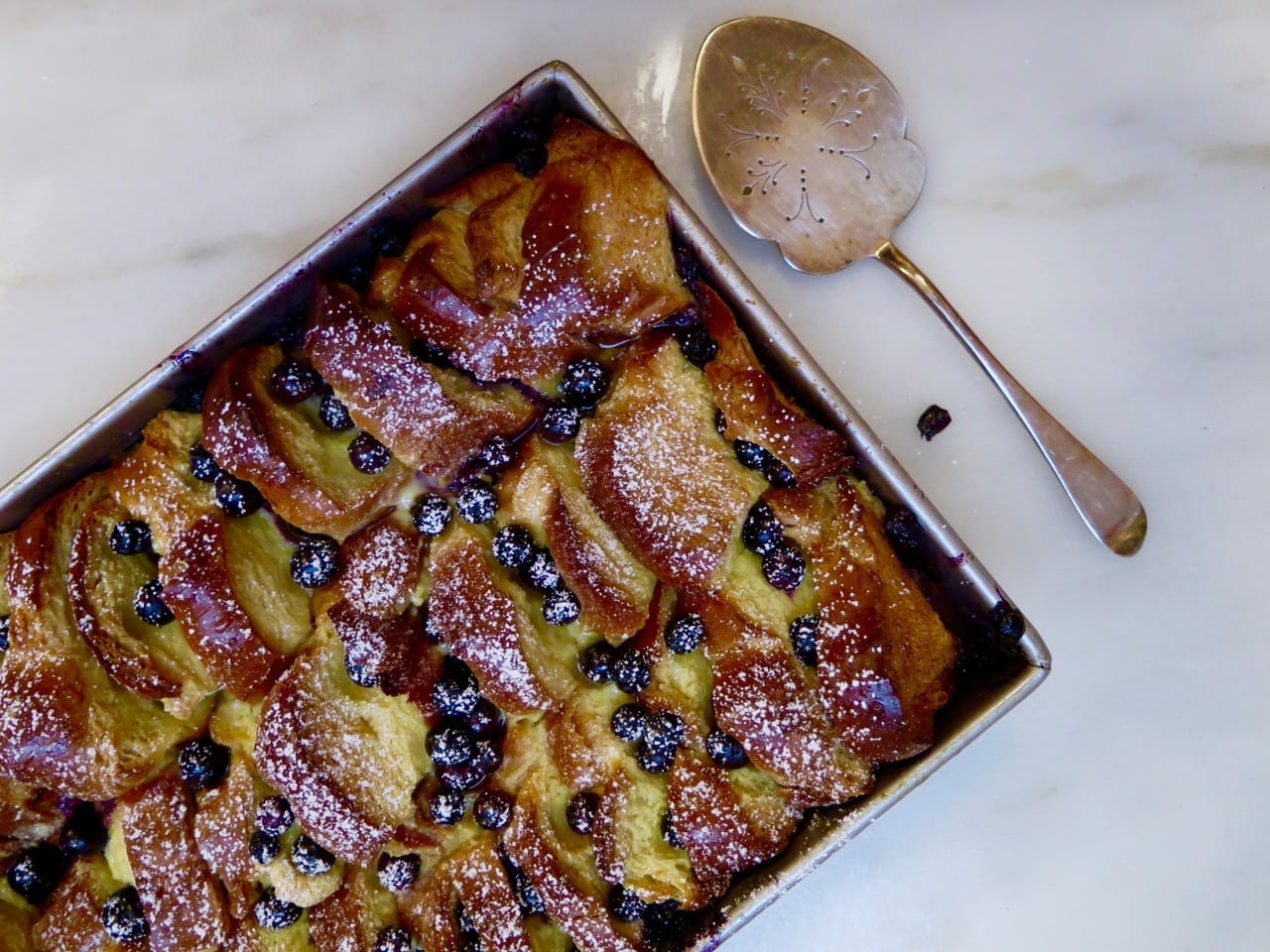 And I’m not going to lie, the recipe came together in a snap. In the past, I had always used Matt and Nato’s baked french toast recipe, sans raspberries and almonds, however, because I am not super into fruit with my french toast/bread pudding. But the bday boy requested blueberries and I wasn’t going to argue (see above for why). I used challah (although brioche would be just as delish), cream and milk for my soaking liquid, and a combo of eggs and yolks, as well as brown sugar, granulated sugar, some melted butter, and no spices — super simple and unadorned in other words. 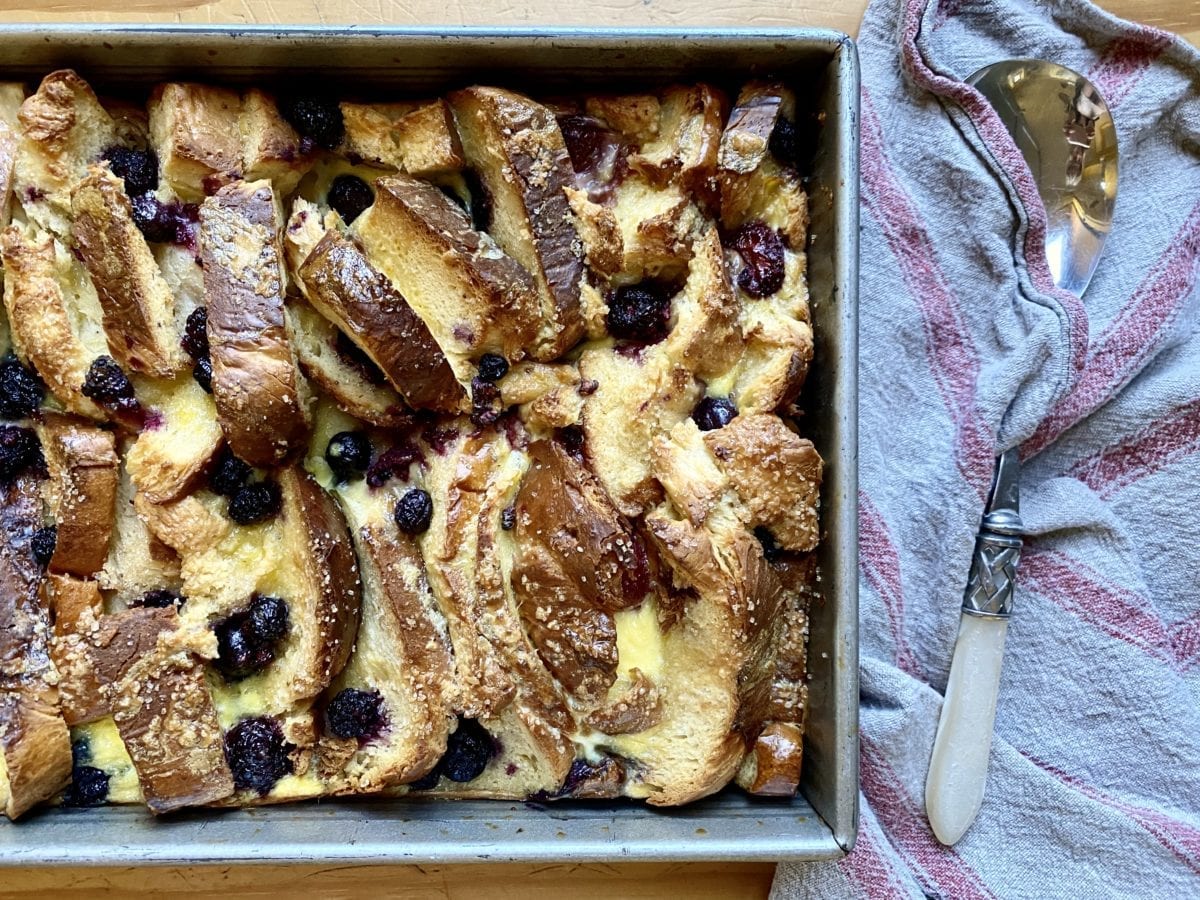 And here’s the thing about baked french toast (in addition to the simplicity of the ingredients), it is one of those dreamy baked goods that you make ahead of time!! (Usually I am wary of exclamation points, but this calls for two). The night before, you slice the bread, layer it (attractively) in your pan, combine all the remaining ingredients, whisk, pour over the bread, and sprinkle on (kind of a lot) of blueberries. Place the pan in the fridge for the night so the bread can soak up the custard, and in the morning, you do nothing but pop it in the oven and feed it to your folks. And to say there’ll be no arguing — even among the teens in your life — is an understatement. Enjoy. 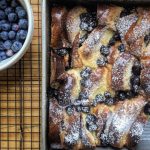 Thanks for subscribing! Please check your inbox to confirm your subscription.
Breakfast Blueberry

yay!! so happy to hear. one of my faves.

I did substitute almond milk for the whole milk. It was fabulous!