If you know me well, or even kind of well, you can probably imagine my excitement when I discovered an old-fashioned recipe for a no-bake banana split cake. I mean I love no-bake (evidenced by the fact I wrote an entire book about no-bake desserts), I love old-fashioned (duh) (see this book of mine for evidence of that) and I love banana splits (that last factoid may not actually be something you knew about me, but whatevs). 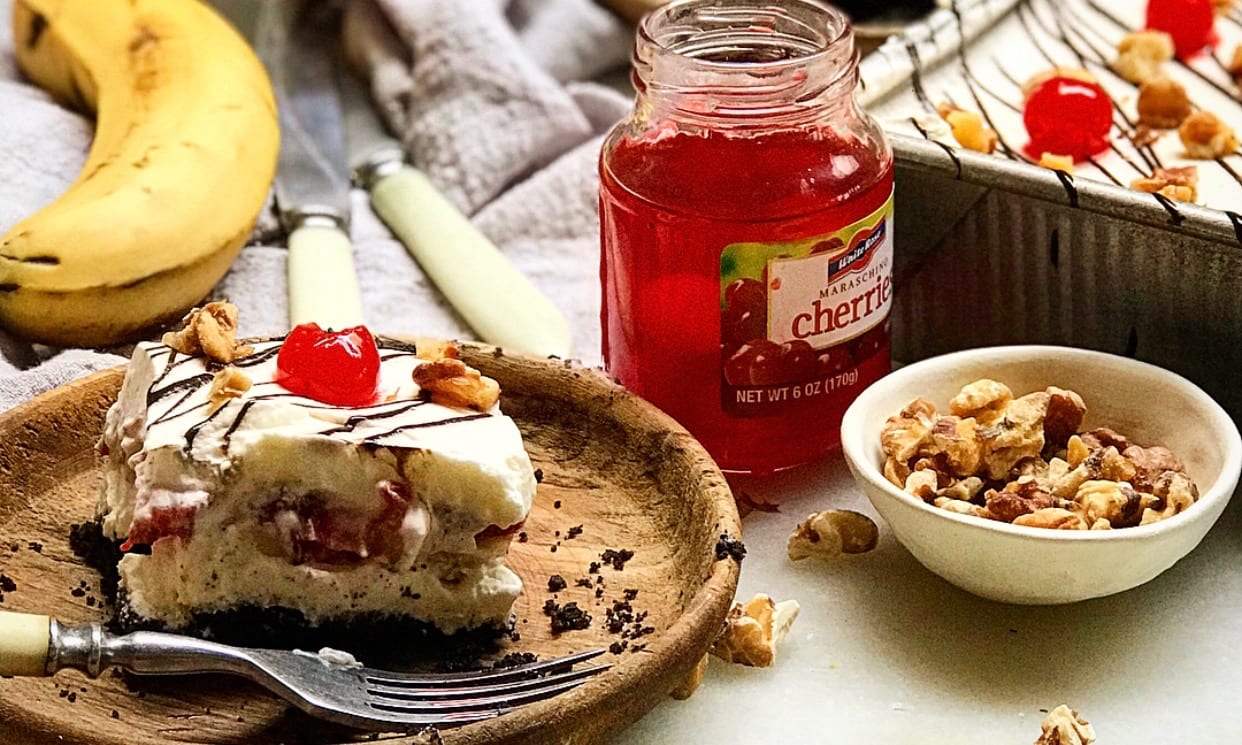 For the uninitiated, which I am assuming is basically everyone, a traditional no-bake banana split cake is a layered dessert – essentially an icebox cake – made with a graham cracker cookie crust, some whipped cream and fruit – bananas most definitely, and often crushed pineapple; some whole raw eggs and some Cool Whip. My IG pal Sarah Carey, has a semifreddo version in the June issue of Martha Stewart, which looks to die-for delicious, and honestly took me by surprise, as I think it did her, too, when she saw mine, as I – of course – thought I was the only one around making large no-bake banana split cakes this summer . . . 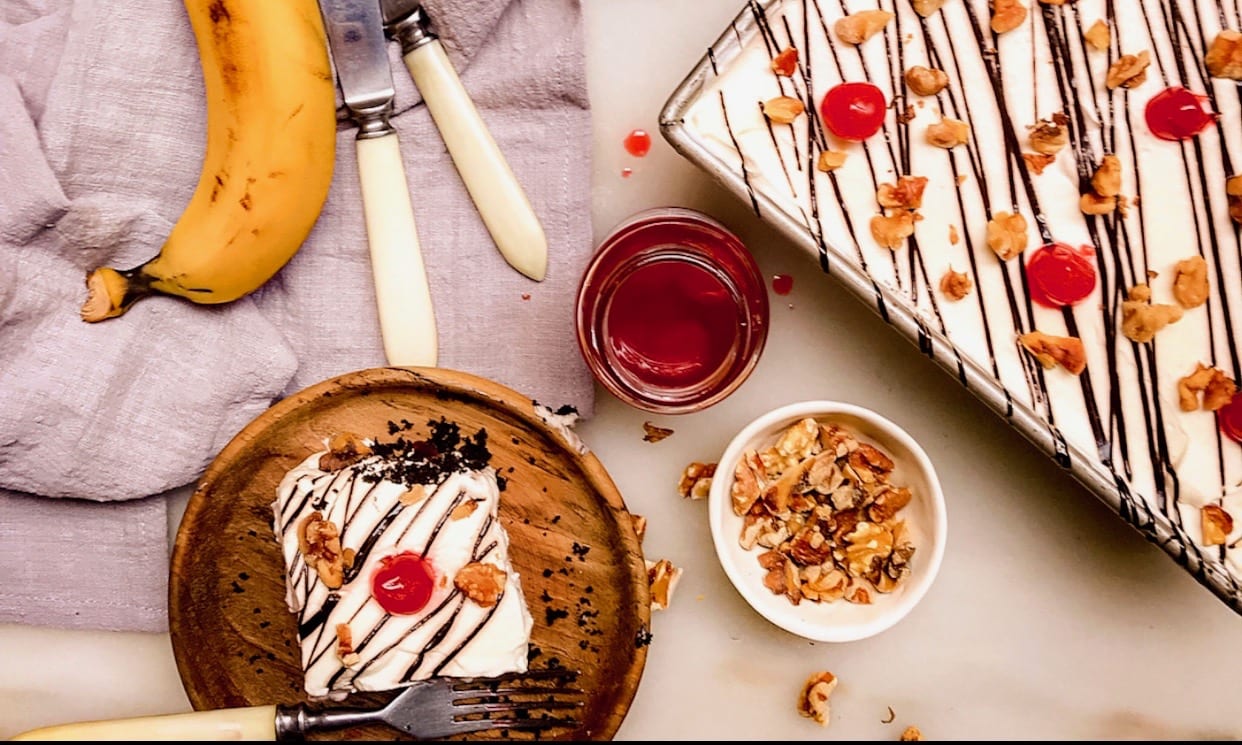 But my version is different than her’s (obvs – as mine is not a semifreddo – though we both do call for a chocolate cookie crust instead of the traditional graham cracker (because chocolate and because great minds do, indeed, think alike). And it is important to note that if you are going to be making the same dessert as someone else, and posting all about it, it is pretty cool if that person is Sarah. But I digress . . . 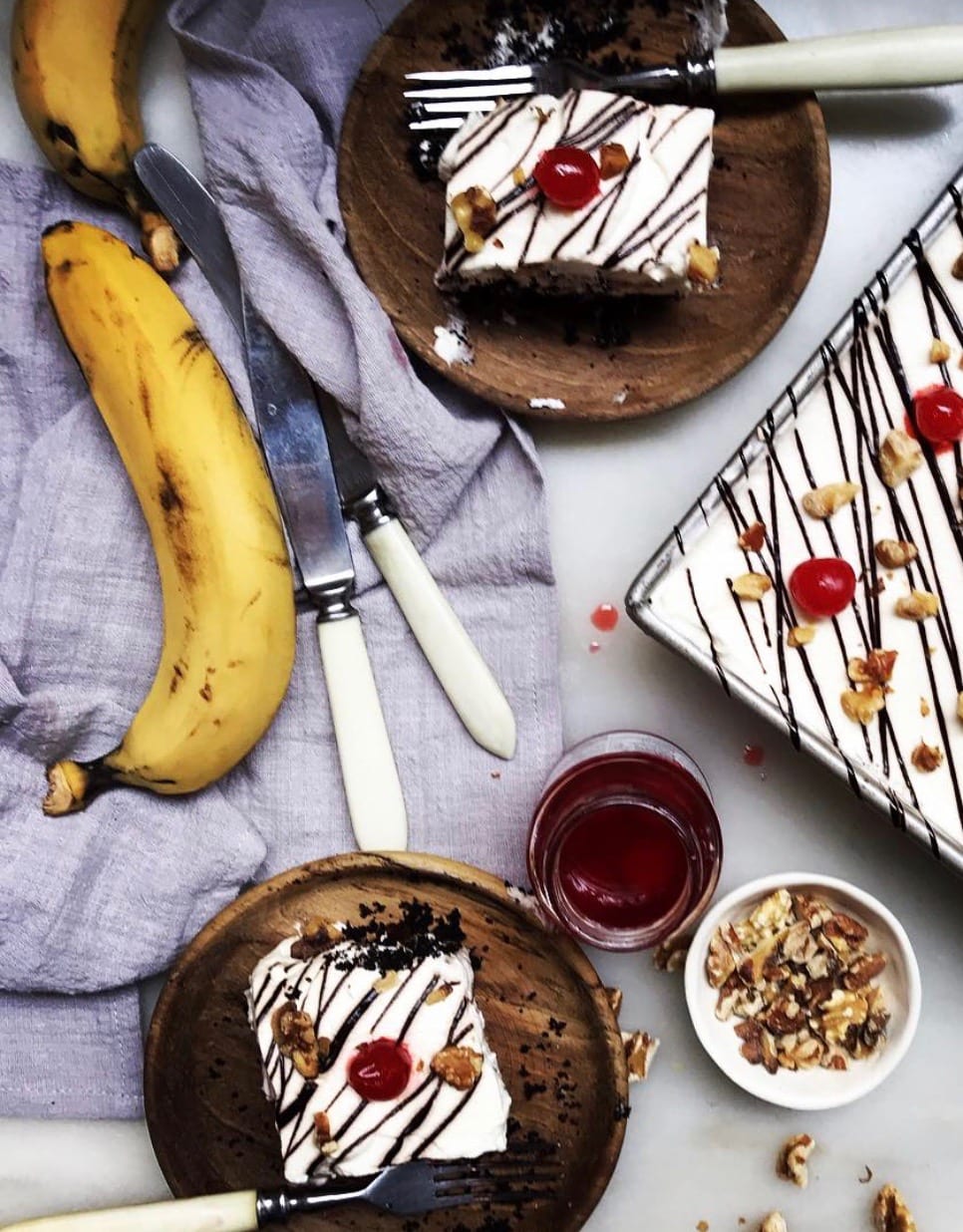 In my dessert I call for strawberries instead of the pineapple, often included in the original recipe, as I am very much NOT team pineapple. I also added a bit of cream cheese to my whipped cream, for a little tang and sturdiness, but then topped the cake in traditional whipped cream à la your favorite sundae. And of course, I drizzled the whole thing with Hershey’s Syrup, sprinkled on a generous amount of deeply toasted walnuts and studded it all with Maraschino cherries (it’s a sundae after all). But in some ways, the perfect kind, as there is no melting – on the off chance you need to carry it with you to a potluck or friend’s home for dinner . . . The recipe can be found here and will hopefully be in the rotation A LOT this summer at your home, as it will mine.