You might think of a galette as the lazy-baker’s pie, and you might not be wrong. For those of us who love the combination of buttery pastry and lightly sweetened fruit, but don’t totally love the time spent rolling out a perfectly round circle of dough that is the perfect 1/8-inch thickness, and then transferring said circle (without ripping it, mind you) to a pie plate, and then delicately and decoratively crimping its edges, and then praying that said perfectly crimped edges do not slump and collapse once baked, well, let me just say this strawberry rhubarb galette is for us.

Galettes leave lots of room for error — or, as I like to think of it, lots of room for creative license. The circle you roll out when making a galette does not need to be perfectly round, nor an even 1/8 of an inch thick. When rolling out a crust for a pie, on the other hand, it must be done evenly, as an extra thick pie bottom might bake more slowly than slightly thinner sides. Moreover, the filling in a pie can take quite a while to really set, and by the time it does so, the crust can be quite dark — maybe even too dark. But with a galette, there is no pie plate to contain all of its magnificence: it bakes evenly due to the sheet pan it lies on. Moreover, the filling is spread in a thin layer across the dough, allowing it to set much more quickly than the traditional pie. Thus galettes are not only less finicky to assemble than pie, they are also much faster to bake. Finally, there is no careful crimping with a galette. Rustic is the name of the game here, so as you make your folds around the edge of the dough, sealing in the filling, do not worry if one fold looks completely different than the next — that is to be expected and applauded. 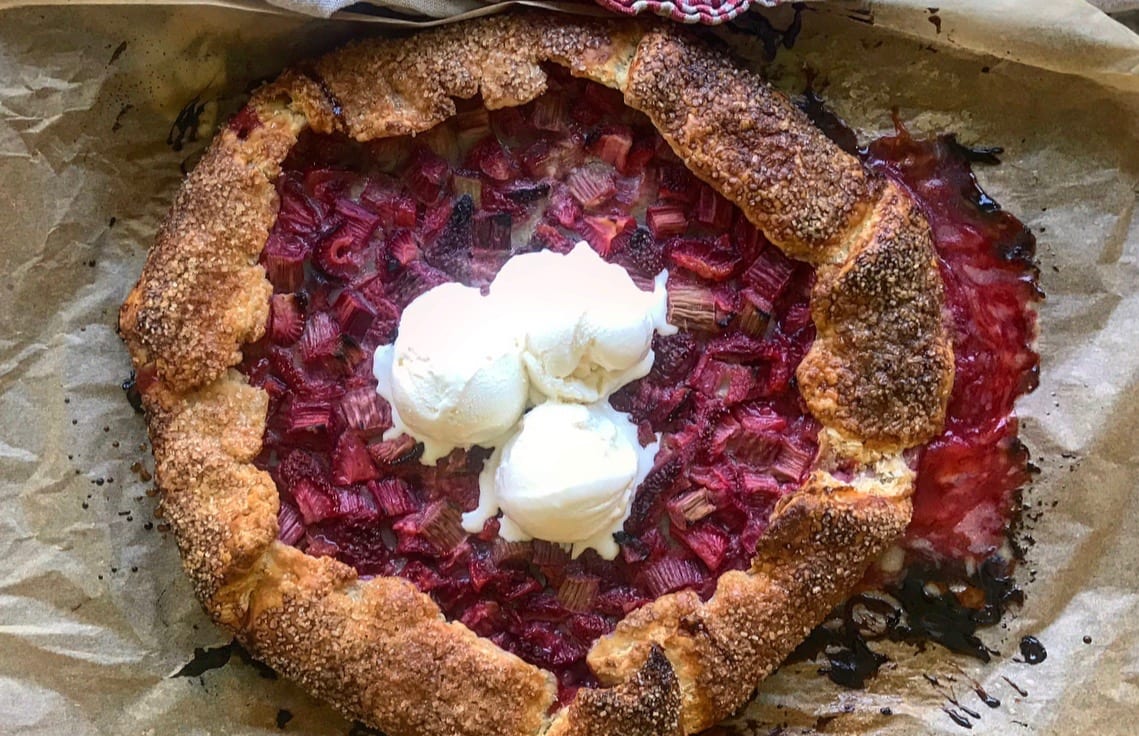 As for this galette, well, honestly, it has a lot going for it. First, it is made with a cream cheese crust — cream cheese is substituted for some of the butter — and this means it is not only tender, but much easier to roll out than a dough made with only butter (you’re welcome). Second, strawberry and rhubarb is just simply one of the best pie filling combos there is, and with a sprinkling of black pepper, for a tiny kick, and a few bits of butter for richness, this particular one coupled with the cream cheese in the crust, truly can’t be beat. Finally, when serving this galette I am partial to scooping my ice cream directly on to the center of the galette, as in the photograph, and serving it to my guests already topped, as it were, as to me there is something super show-stop-y and fun about this presentation. But if this is not your cup of tea (and it is not my husband’s, FYI) then by all means scoop individual servings of ice cream onto each person’s plate. I won’t hold it against you. Here is the strawberry rhubarb galette recipe can be found here.

The text and recipe were originally published in Main Street Magazine.

Thanks for subscribing! Please check your inbox to confirm your subscription.
Fruit Desserts Pies Strawberry