Okay, peeps, so I’ve been going on and on about how I am not a huge fan of pumpkin (sorry haters) and then am simultaneously finding it necessary to do a lot of posting of pumpkin content. I’m a total hypocrite, obvs, and so apologies in advance. But ’tis the season and all that (the pumpkin season), and I have developed a few pumpkin recipes over the last few months that need sharing and so there you have it. First up, are these pumpkin donut holes, which are drenched in melted butter when still warm from the oven — yes, my friends, these babies are baked — and then rolled in a cinnamon sugar mixture until thickly coated — you’re welcome. Usually, I am only on board with pumpkin if chocolate is involved, like when I made pumpkin whoopie pies with chocolate cream cheese filling for Food52. Or, when I made pumpkin sheet cake with chocolate bourbon buttercream for Main Street Magazine. Or, pumpkin snacking cake with chocolate cream cheese frosting for Chowhound. But in this instance, my lovely pals at the Spruce Eats invited me to film a video with them, and asked that I choose the particular sweet that I wanted to prepare — and because I was trying to think outside of my not-crazy-about-pumpkin box, I thought of pumpkin.

Moreover, I had just developed a baked pumpkin donut for The Spruce Eats, at their request (as I would not have chosen to develop a recipe for a pumpkin donut on my own volition, as mentioned above), and so I thought I’d riff on that in the video. Moreover, I am obsessed and awfully proud of my dirt bomb donut holes, and thought the technique I use for assembling those would be great to share with the Spruce Eats audience via video. And so that is how this recipe came to be . . . My dirt bombs are a slightly spicy, nutmeg-flavored donut hole (drenched in melted butter and rolled in cinnamon sugar) that you bake in the oven using a mini-muffin pan. And so for these pumpkin holes, I chose to do the same thing. I made my pumpkin donut batter, but rather than pipe it into a donut pan, I dropped tablespoonfuls into the tiny cavities of my (sprayed) min muffin pan and voila! They bake up in less than 12 minutes and because they are rolled in the melted butter when still warm, their edges are softened by the warm butter and cinnamon sugar coating and they really do look more round and donut hole-like, than mini muffin-like . . .

But, you know, regardless of how they look, they really are unbelievably tender and moist and delicious; with just enough pumpkin flavor cut with just enough cinnamon and sugar to be just enough perfect. Moreover, the crunchy texture of the coating is lovely against the soft interior of the holes, and the sparkly look of the holes ain’t half bad either. Pumpkin lover or not, I guarantee these are crowd pleasers. And you know that if I am saying this, a reluctant, only temporary, member of team pumpkin, it must be true. 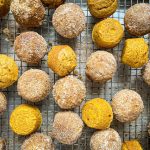