Oh, gosh, peeps — there are so many good things to say about this pie I’m not even sure where to begin, but I think sharing a description might be in order. So, let me just say that if you’re fond of chocolate pudding, dig fudgsicles, appreciate a little nutty crunch with your sweets, and believe dessert really isn’t dessert unless billowy whipped cream is involved, well then I think this frozen “Swiss” chocolate pie o’mine, made with a pre-made, buttery and crumbly, over-the-top delish DIAMOND OF CALIFORNIA’S WALNUT PIE CRUST, no less, is going to be right up your alley. I first stumbled upon frozen chocolate “Swiss” pie (and by first “stumbled” I mean first inhaled several slices in one sitting) at my mother-in-law’s house, when I was there in my capacity as her beloved youngest son’s girlfriend. By the time I tried the pie, I already knew she was an exceptional baker and sweets-maker, not to mention cook. But the pie elevated her to genius treat-making guru status and for that I was unprepared. 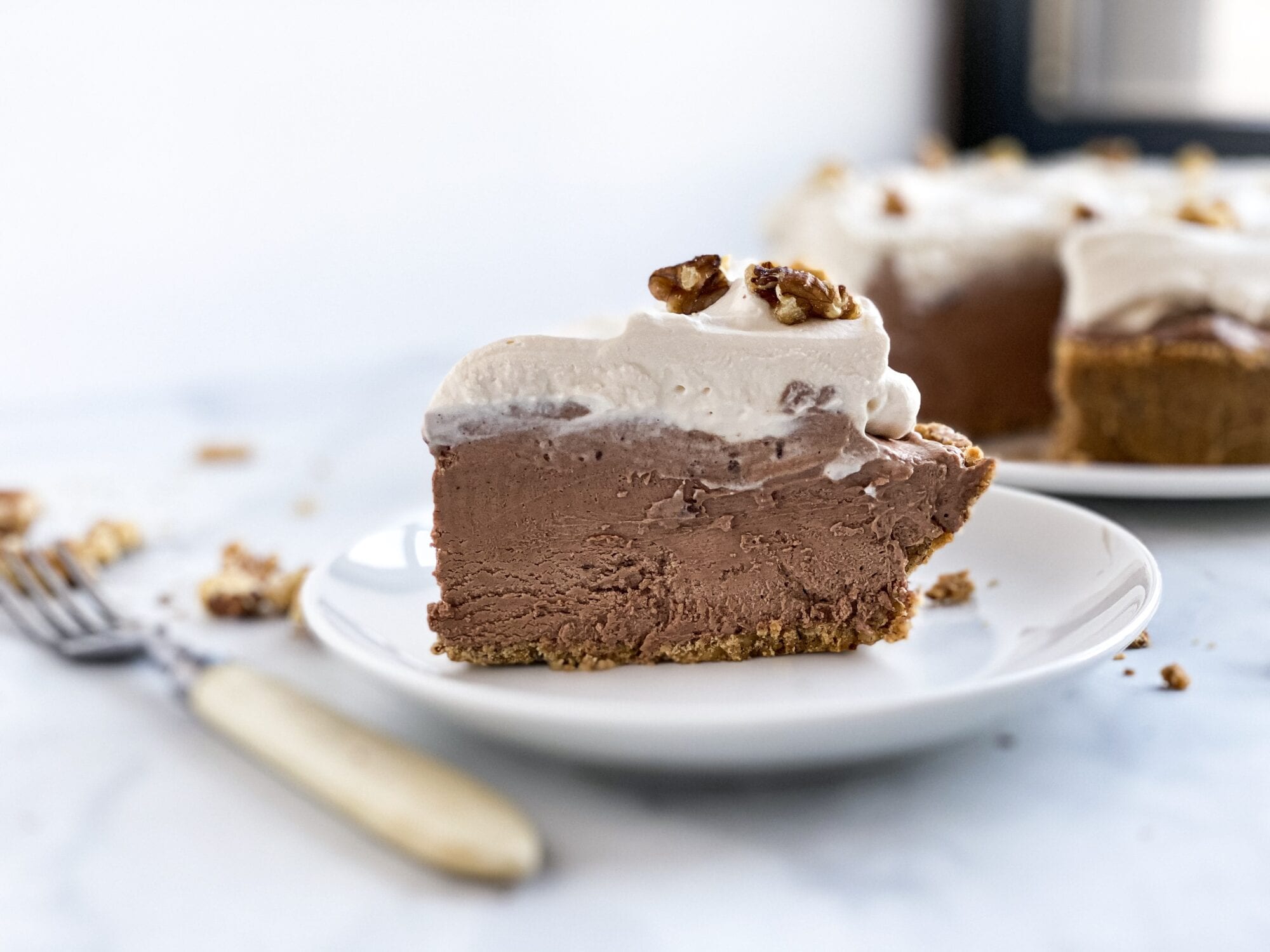 Lucky for me, a few years later I graduated from girlfriend (who was super fond of pie) to wife (deserving of recipe for said pie). The recipe called for pressing a simple walnut crust — made from chopped walnuts, sugar and melted butter — into a glass pie plate and filling said crust with a chocolate-cheesecake pudding of sorts, made from melted chocolate chips, cream cheese, whipped egg whites and heavy cream. The pie was then placed in the freezer and slices were served unapologetically frozen solid — in every season (this is not a summer pie, in case you thought otherwise). It was completely dreamy in its simplicity and I made it often and with abandon. 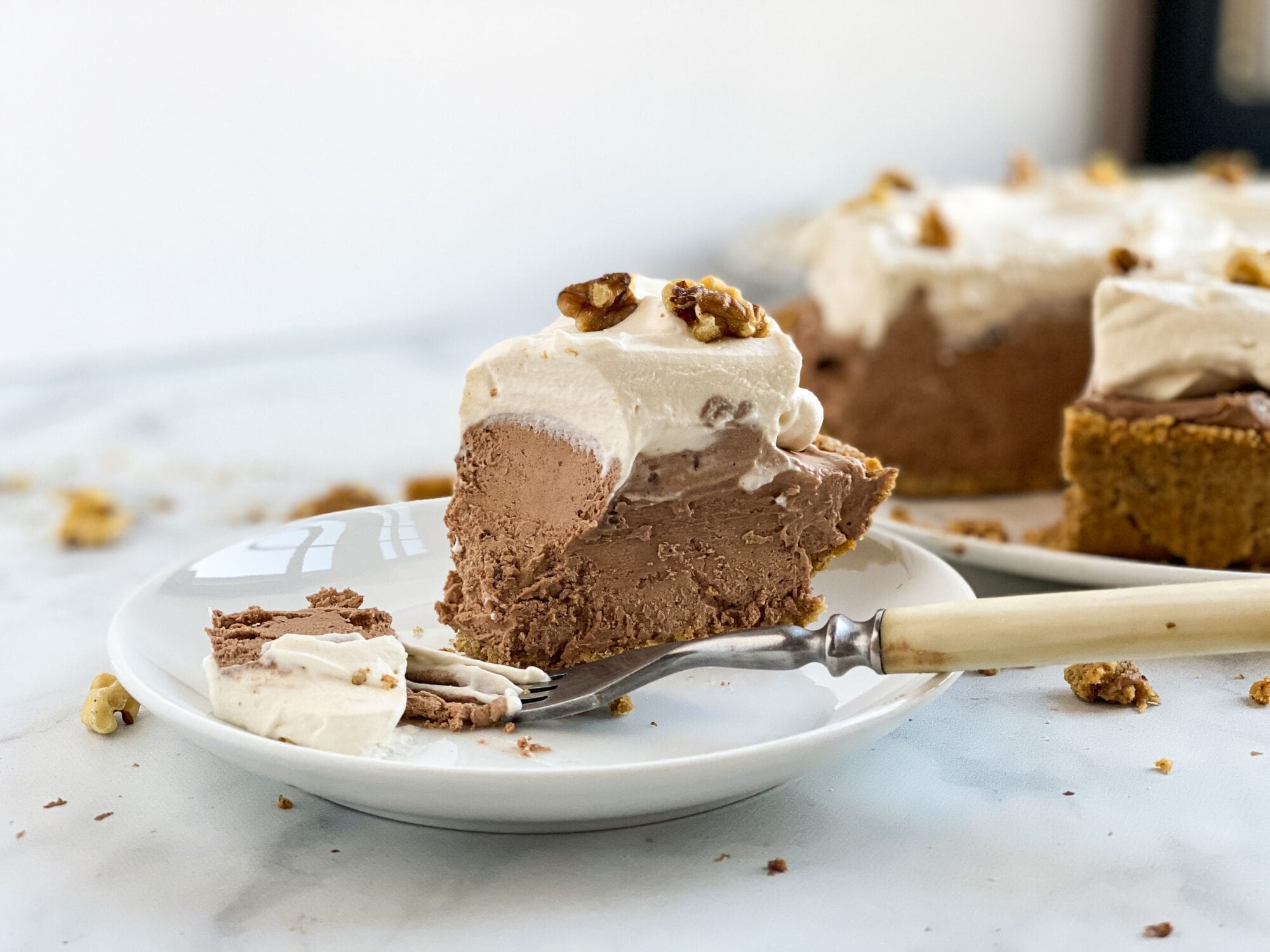 Cut to this past summer when I was fortunate enough to attend a Diamond Of California  and Joy the Baker event in NYC, in which the amazing Joy demo’ed a dark n’ stormy pie in a Diamond of California pecan pie crust. I was immediately smitten (and not only because I love a dark n’ stormy and had just developed an icebox cake dark n’ stormy for the Washington Post version earlier in the summer). In fact, I was smitten because Diamond’s new product was utterly scrumptious and made me think of my mother-in-law’s frozen “Swiss” chocolate pie in its walnut crust, and how lovely it would be to make said-pie in a pre-made Diamond of California nut crust, instead. 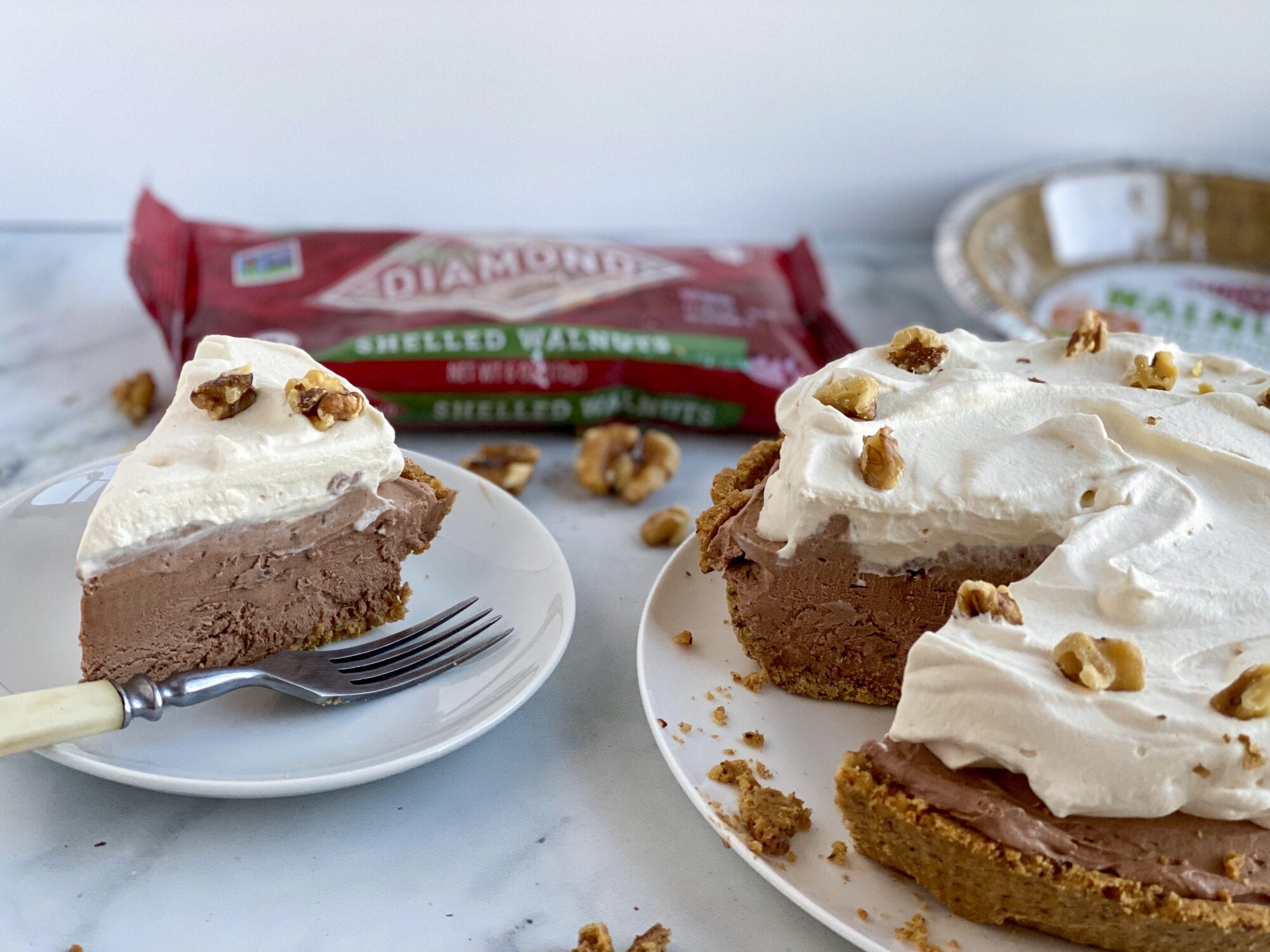 And as luck would have it, I’ve been given the opportunity to do just that. I tweaked my mother-in-law’s recipe just a bit, adding more chocolate, as well as vanilla and salt (you’re welcome), and topping the whole thing in unsweetened whipped cream and a sprinkling of toasted and chopped (Diamond of California) walnuts. The crust is as good as my homemade one, just sayin’, and is so easy to work with (i.e., you don’t have to do any work). It also easily slips out of the metal pie tin once it is frozen, and looks so pretty on the serving plate in all its exposed-crust glory. 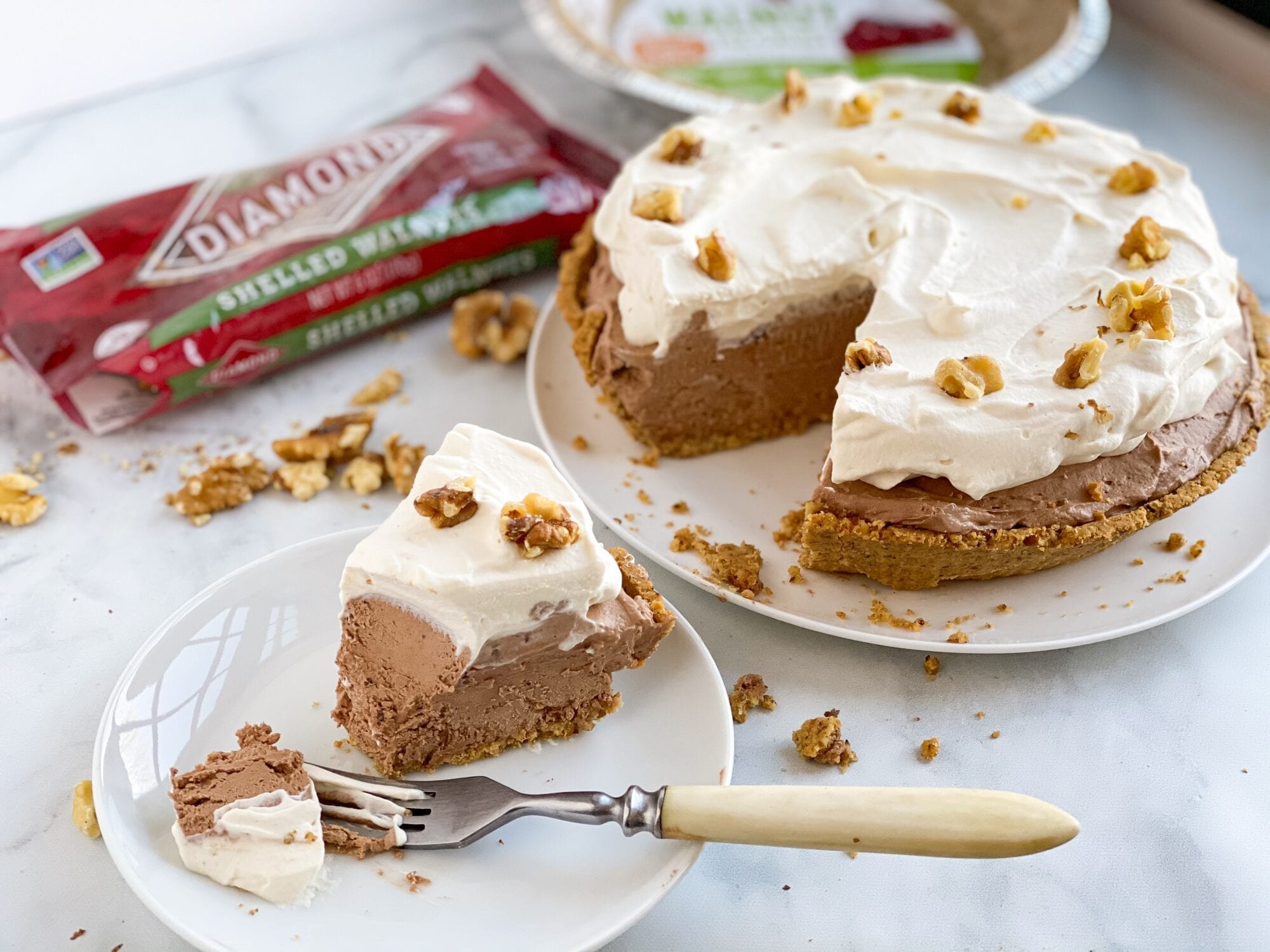 A word or two about the recipe: first, and most importantly, you should be able to find Diamond of California Nut Pie Crusts at your local grocery store. Second, the pie does call for raw eggs (I mean, this is an old fashioned recipe, and it was created back when folks did not worry so much (if at all) about food borne illnesses). But pasteurized eggs are pretty easy to find these days, if you are concerned (and you can pick them up while you’re purchasing your Diamond of California Nut Pie Crust). Third, the filling might look dense, but it is actually wonderfully light. To achieve said lightness, make sure your cream cheese is at room temp when you beat it and that you add your melted chocolate only after it has completely cooled — if it is warm, the mixture will seize. It still makes for a tasty filling, but not quite as ethereal a one. Fourth, if you do not love the idea of a frozen pie, feel free to refrigerate the pie instead (for a more chocolate pudding pie vibe). And, finally, I wish I could tell you why the word “Swiss” is in the name of this pie — I truly have no idea and a fair amount of internet research has yet to reveal the answer. 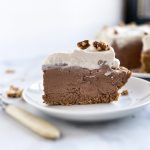 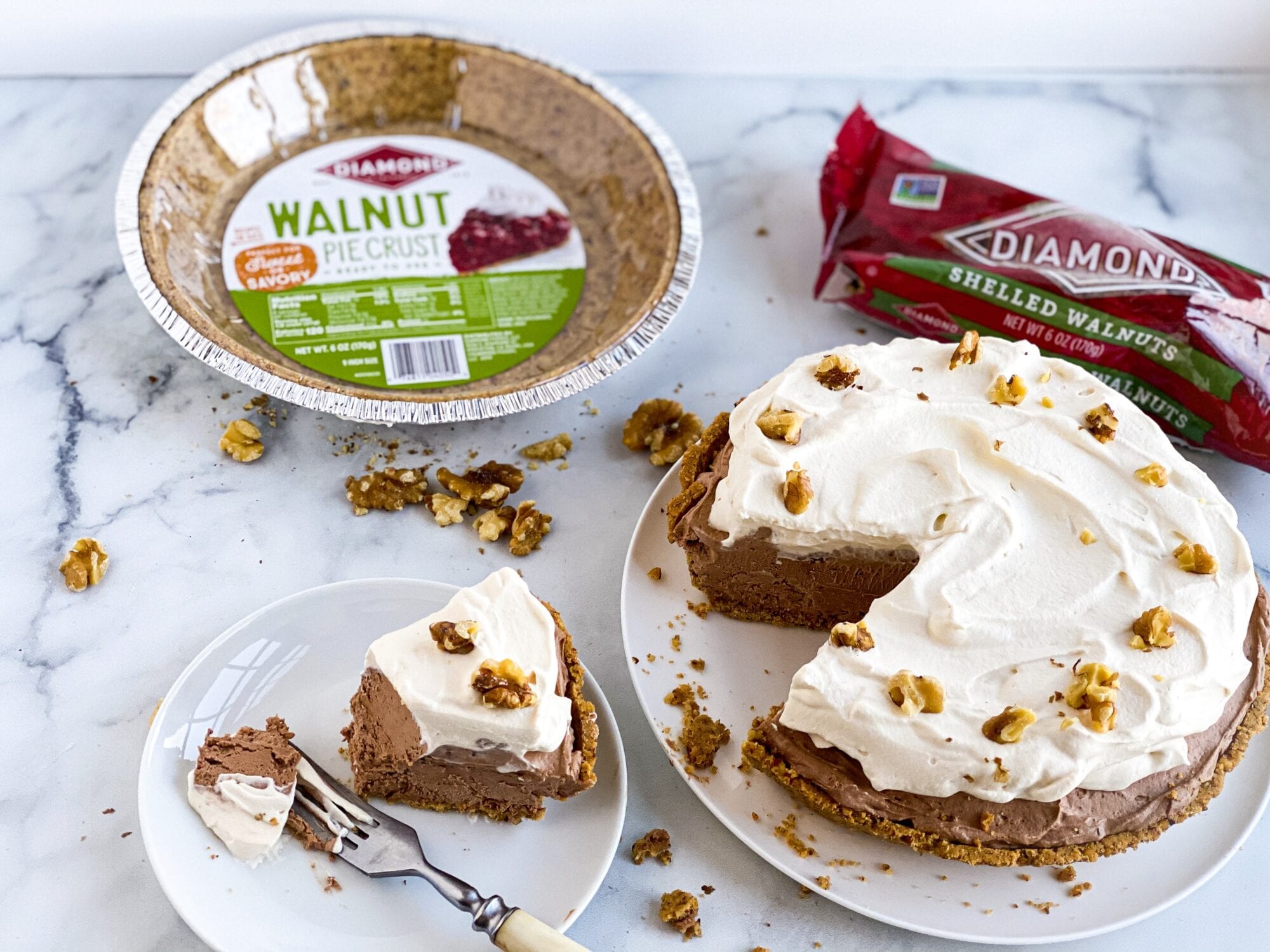 Thanks for subscribing! Please check your inbox to confirm your subscription.
Pies Chocolate