Skip to the content
If you want to know how to make Rice Krispies Treats even better, there’s an easy answer, and it’s probably in your pantry right now.
Jump to Recipe Print Recipe

I’ve been a huge Rice Krispie Treat fan since back in the day. I mean it was hands down my favorite sweet as a kid – I memorized the recipe from the back of the cereal box and made them on the regular. Post-college I discovered a bakery near my first NYC apartment that sold them in massive blocks, and I purchased one a day for about a year. In 2007, the New York Times published a recipe for Caramelized Brown Butter ones, perhaps the first of its kind (though now brown butter Rice Krispie Treats is basically a thing), and that has been my go-to recipe for over a decade – until now.

Last spring, at a food event at which I was working, I tasted the best Rice Krispie Treat, umh, ever. It hailed from the geniuses at Brooklyn’s Meme’s Diner and it literally blew my mind. It was the gooiest, butteriest, softest and chewiest of treats and I ate about a million (the Meme’s peeps and I shared a table, so this was easy to do, as the treats were displayed right next to me for several hours – yes, it was heavenly). Though I did not inquire at the time as to what it was that made the wildy addictive treats so spectacular (perhaps because I was focused on eating as many as I could without drawing too much attention to myself), I stumbled upon the reason here several months later: sweetened condensed milk is the magic addition to a batch of Rice Krispie Treats. Miraculously, it sends them over the top texturally, without making them too sweet, or really changing the taste of the beloved classic much at all.

My treats recipe now calls for half a cup, but I’ve made some additional tweaks, like an extra cup of whole mini marshies for folding in at the last minute (cause aren’t we all in it for the intense pockets of goo – or, is that just me? ), a generous teaspoon of fine sea salt, plus some of the flaky variety for sprinkling (because, umh, salt), and a tablespoon of vanilla (the vanilla works wonders with the melted, buttery marshmallows . . . ). In short, sweetened condensed milk, some extra marshies, salt and vanilla, is all that stands between you and the Rice Krispie Treats of your dreams.

Moreover, Rice Krispie treats aren’t just for bake sales anymore, FYI. They are great for holiday potlucking-ing and a stellar addition to your cookie box (though if you are sending them through the mail, wrap them in plastic wrap first, so they don’t dry out). Or, enjoy them the way I do: standing at my kitchen counter, uninhibitedly slicing slivers from the pan (when they are just this side of room temp) and not doing a very good job of sharing. Sorry/not sorry. 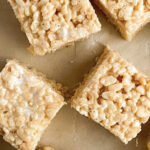 If you want to know how to make Rice Krispies Treats even better, there’s an easy answer, and it’s probably in your pantry right now.
Recipe Author Jessie Sheehan

Thanks for subscribing! Please check your inbox to confirm your subscription.
Bars Marshmallow