Oh, gosh, peeps:  you guessed it. I have another (dare I say “fab”) recipe calling for Colavita Olive Oil . . . my fave . . . for you. And it’s a recipe that is pretty close to my heart because it is a recipe for fudge. Now I have an interesting relationship with fudge (in case you were wondering) because I have not always been a huge fan. In fact, I was basically the opposite of a fan. No, I wasn’t a fudge “hater,” per se, but I really had no time for fudge and didn’t really understand all those folks who did.

But then I wrote my second cookbook, The Vintage Baker, and I included a recipe for fudge in the book, despite feeling kind of meh about fudge . . . Now, I did this because the book is full of old-fashioned recipes and fudge is – if nothing else – kind of old fashioned (ie: people have been making fudge for a very long time . . . ). And when the book was published and folks started making recipes from the book, guess which recipe everybody loved? Yup: the fudge recipe. In fact, the fudge recipe was so popular that I ended up making it on national television and it lives on on lots of different sites other than my own, including this one.

So, this is a very long way of saying that when I was thinking about my next recipe for Colavita, I thought of how much I love the combo of chocolate and olive oil and wondered about drizzling some on fudge (since everyone seems to love fudge, including me, now). I decided to fill my fudge with coconut and toasted almonds (which is a stellar combo, FYI), to sprinkle it with flaky sea salt and then drizzle with oil right before serving and wow: was it ever tasty. Yes, it is kind of unusual to eat a piece of fudge with a little drizzle, as it were, but it is really special. The combo of the grassy olive oil and the rich chocolate and the sharp salt, is just otherworldly and I do hope you’ll give it a try. Oh, and if you’d like to see me make this fudge, you can do so here. 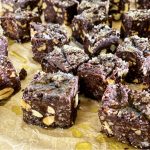