It was never my intention to develop a recipe for chocolate pb krispie O’Henry bars. Baked, the first bakery that I ever worked at (and the only one . . . ) has an absolutely spectacular version (though they don’t call it and “O’Henry bar”) and although I have been known to tinker with a good thing (as ended up being the case here), I would never actively set out to do so. Instead, in this instance, I merely wanted to tweak and fiddle with my mother-in-law’s recipe for O’Henry Bars — an oatmeal-based bar with a peanut butter chocolate topping that my husband snacked on incessantly growing up. But when I began researching Oh Henry Bars to investigate how my mother-in-law’s recipe might differ from those of others, I realized rather quickly that there are actually two kinds of said bars: the oatmeal-based one and the chocolate pb krispie o’henry bar.

And being a Rice Krispies Treat fanatic (very low-brow of me, yes), I knew I had to take a stab at the crispy rice cereal version. (Full disclosure: all research was web-based — my books are sadly lacking in the Oh Henry Bar department, which —duh — is what motivated me to develop a recipe for them in the first place). Now, although my perusal of the web led me to several different recipes for O’Henry Bars with crispy rice cereal, really, they were all just versions of the scotcheroos from RiceKrispies.com.

And because I am not afraid to borrow techniques, ingredients, etc. from the website of a national brand of breakfast cereal (I’m not kidding about this lowbrow thing), I was all-over the particular method used to make the Rice Krispies Treat part of the scotcheroo: Rather than use melted marshmallows and butter, like in a traditional Rice Krispie Treat, or bring water, sugar and corn syrup to the softball stage, as is done in the Baked recipe, in the scotcheroo recipe, you merely boil sugar and corn syrup together, briefly, to basically the same effect, but in a quarter of the time (i.e., you create an absolutely dreamy, perfectly sweet, chewy, yet crispy Rice Krispie Treat in minutes — and boy, do I love a shortcut). Truth be told, I had an inkling that a shortcut existed, for when Smitten Kitchen posted the Baked recipe for peanut butter crispy bars, someone commented on the fact that bringing the sugar syrup to softball was unnecessary, in light of  the scotcheroo technique. But I digress . . .

Long story short, this recipe is beyond simple and beyond delicious. Although the technique for making my O’Henry Bars owes its provenance to the scotcheroo (I love writing “scotcheroo”), that’s all it owes. To the “treat” part of the bar, I added butter, as is done in the Baked recipe, and vanilla and salt, two of my faves for amping up the salty peanut butter-y-ness of it all. For the topping, I decided on a milk chocolate peanut butter ganache with a sprinkling of Maldon sea salt — and not because I thought ganache and fancy salt would elevate my treat from its humble cereal box-website roots (like I said, I’ve no shame) but because it’s yummy. And I’m certain you will find it so, too. 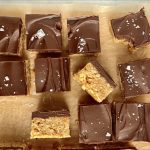 Thanks for subscribing! Please check your inbox to confirm your subscription.
Bars Chocolate Marshmallow Peanut Butter

So yummy. Reminds me of a desert my mom used to make. Thanks

this is 7 years too late – but you’re welcome! i have just updated the recipe.

Have you had the ones that have a maple taste?? Those are the ones I’m looking for!!!

hmmm, i’ve never made one with a maple tase when i tried doing it with regular maple syrup, i had trouble getting the flavor to pop – so i’d try maple extract to taste or reducing the syrup