So, fritters are one of my favorite things ever. They are essentially donuts – which literally ARE my favorite things ever, but they are so wildly easy-peasy it’s a wonder I don’t make them everyday. Fritters were first on my radar when I was writing The Vintage Baker. I kept coming across recipes for them in the vintage recipe booklets I used as inspiration when researching and so wasted no time in including one in the book.

END_OF_DOCUMENT_TOKEN_TO_BE_REPLACED

Popovers have kind of a lot going for them, in case you did not know. They are not only visually dramatic and incredibly delish, but their assembly requires only your blender, making them a quintessential “one-bowl” wonder, as it were. They also only call for pantry staple ingredients — no need to run to a specialized grocery store, nor really any grocery store, as long as you have flour and eggs and milk and olive oil (which I know you have . . . ) in the house . . .

Moreover, they are wonderfully adaptable. Check out this gruyere black pepper popovers recipe to see how to add cheese (and black pepper) to them. Now about adding olive oil to popovers: I have been, as some of you may know, partnering with Colavita Olive Oil, on an oil-based baking video series (check out this Instagram video on brownies and this video on cheddar bacon muffins to see the last two episodes) and when I was thinking about what to make and record for this week, olive oil popovers popped (pun intended) into my head.

Popovers are kinda/sorta one of my fave things to make (for all the reasons I mentioned above) and I even included a recipe for one in my cookbook, The Vintage Baker. But I’ve always made them with melted butter, and it hasn’t even ever really occurred to me to make them with oil. But lately I have had oil on the brain (particularly olive oil). Moreover, when a recipe calls for melted butter, I always wonder if perhaps oil could be used in its stead, like one can in muffins or tea cake. The general rule is to use 3/4 as much oil as butter — in other words, if the recipe calls for 1 cup melted butter, you would substitute with 3/4 cup of oil. Anyway, long story short, popovers only call for a small amount of melted butter to begin with — my go-to recipe calls for only 3 tablespoons — and so subbing 3 tablespoons of olive oil seemed like it would be a pretty easy, tasty and workable swap — and it is. Hope you give these cuties a try and if you do not have a popover pan, never fear, you can make these in a regular muffin tin, they just won’t rise quite as high as when made in a proper popover pan. But will they still be beyond yum? You betcha. 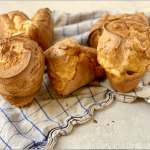 Popovers are kinda/sorta one of my favorite things to make. But I’ve always made them with melted butter, and it hadn’t ever really occurred to me to make them with oil. But lately I have had oil on the brain (particularly olive oil). Olive oil in place of the butter is a delicious and workable swap and I hope you’ll give these cuties a try.
Recipe Author Jessie Sheehan

So, truth be told I first developed a bacon cheddar muffin recipe when writing my second cookbook, The Vintage Baker. The book includes recipes that were popular back in the day, as it were, and not that everyone was eating bacon cheddar muffins a century ago, but they were definitely eating muffins. The “bacon cheddar” addition was to be my 21st century twist on an old-fashioned muffin recipe. But, alas, the recipe did not make the cut when my editor realized we had to cut back on the book’s number of pages. A year or so later I developed a jumbo cheesy muffin for the Washington Post, with prosciutto, no less, but I still had my bacon cheddar muffin on the brain . . .

Cut to my partnership with my beloved Colavita Olive Oil in which I create an oil-based baked good each week to share with you all (you’re welcome — and you can watch me make this particular olive-oil based good on Instagram. The recipes call for – you guessed it — Colavita Olive Oil, and this week I decided to go in a savory direction with these bacon cheddar goodies. They are easy-peasy to assemble — like they literally take about 5 minutes — and call for copious amounts of sharp cheddar cheese and crispy bacon. The oil makes them wonderfully moist (and allows them to stay that way for days) and a little peppery.

The bacon cheddar olive oil muffins also have the loveliest of rounded tops which is achieved by filling the muffin tins 3/4 of the way full and by starting the oven at 400°F for the first 10 minutes of baking, and then dropping it to 350°F for the last 5 to 10 minutes. Finally, the best way to enjoy these cuties and — dare I say — truly the only way, is warm, from the oven with a generous smear of softened salted butter. 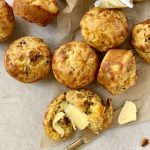 These bacon cheddar olive oil muffins are easy-peasy to assemble. They literally take about five minutes — and call for copious amounts of sharp cheddar cheese and crispy bacon. The oil makes them wonderfully moist and a little peppery.
Recipe Author Jessie Sheehan

I am relatively new to the world of popovers (hollow, puffy, eggy, crispy edged “muffins,” of a sort) if you must know. In fact, I had never even made them until a few years back when I was developing recipes for my cookbook, The Vintage Baker. The book is chock full of vintage recipes that I have twisted and tweaked for the 21st century baker, and I decided to include a popover recipe in the book due to their popularity back in the day. In short, I stumbled upon so many old-fashioned recipes for popovers when rifling through my collection of vintage recipe booklets, that taking a stab at them seemed nothing short of mandatory. I was shocked and oh, so pleased, at how easy they were to make and decided on a cacio e pepe one (pecorino romano and black pepper) for The Vintage Baker.

END_OF_DOCUMENT_TOKEN_TO_BE_REPLACED

Alrighty then, I’m at it again with another pumpkin dessert. Me, the peep who keeps going on about how ambivalent she feels about pumpkin . . . But here’s the thing: when you host Thanksgiving (and tho I am not doing so this year, I do so most years) and you are into baking and sweets-making (me, again) you kinda/sorta have to bake up a pumpkin pie, or at the very least something resembling a pumpkin pie. Prior to writing my second cookbook, The Vintage Baker, the dessert I made to mimic a traditional pie of the pumpkin variety was a pumpkin mousse tart (or a pumpkin chiffon tart) with a gingersnap crust and lots of billowy whipped cream.

END_OF_DOCUMENT_TOKEN_TO_BE_REPLACED

Peeps, I have kind of a lot of summer-y dessert recipes that I am going to try to post as fast as is humanly possible (aka in the next few days/weeks), as I don’t want you to miss out, and I also don’t want you to be annoyed to see me posting recipes for treats calling for berries and ice cream and all things summer in October. So, consider this the beginning of the last-minute marathon of summer desserts, and here we go. First up: BAKED ALASKA — one of the best damn desserts on the planet, hands-down — or at least if you are one of those peeps who digs ice cream and cake and toasted meringue, and I am hoping that that is most of you. Otherwise, I’m going to have a hard time hanging with you. (JOKE.)

END_OF_DOCUMENT_TOKEN_TO_BE_REPLACED
Thanks for subscribing! Please check your email or spam folder to confirm your subscription.