So, something kind of unprecedented happened in the writing/developing of this blog post, and although I want to share it with you, I am not sure if it will endear me to you, or kind of freak you out. But here goes: I consumed almost an entire pan (i.e., 8 buns) of still-warm-from-the-oven, slightly gooey cinnamon buns, with a cinnamon buttermilk glaze, just prior to sitting down at my desk to begin writing this post. Now, I say this was unprecedented not because it was the first time I ate just a wee bit/way too much of a treat I developed and intended to blog about. But instead, because the treat I was eating too much of was spectacular. Like over-the-top delicious and perfect. And you see, in the past, when I have consumed too much of a still-in-development sweet, it is because something about it is not over-the-top delicious and spectacular. Therefore, in order to determine what said un-perfect sweet needs, I keep nibbling and nibbling and nibbling. 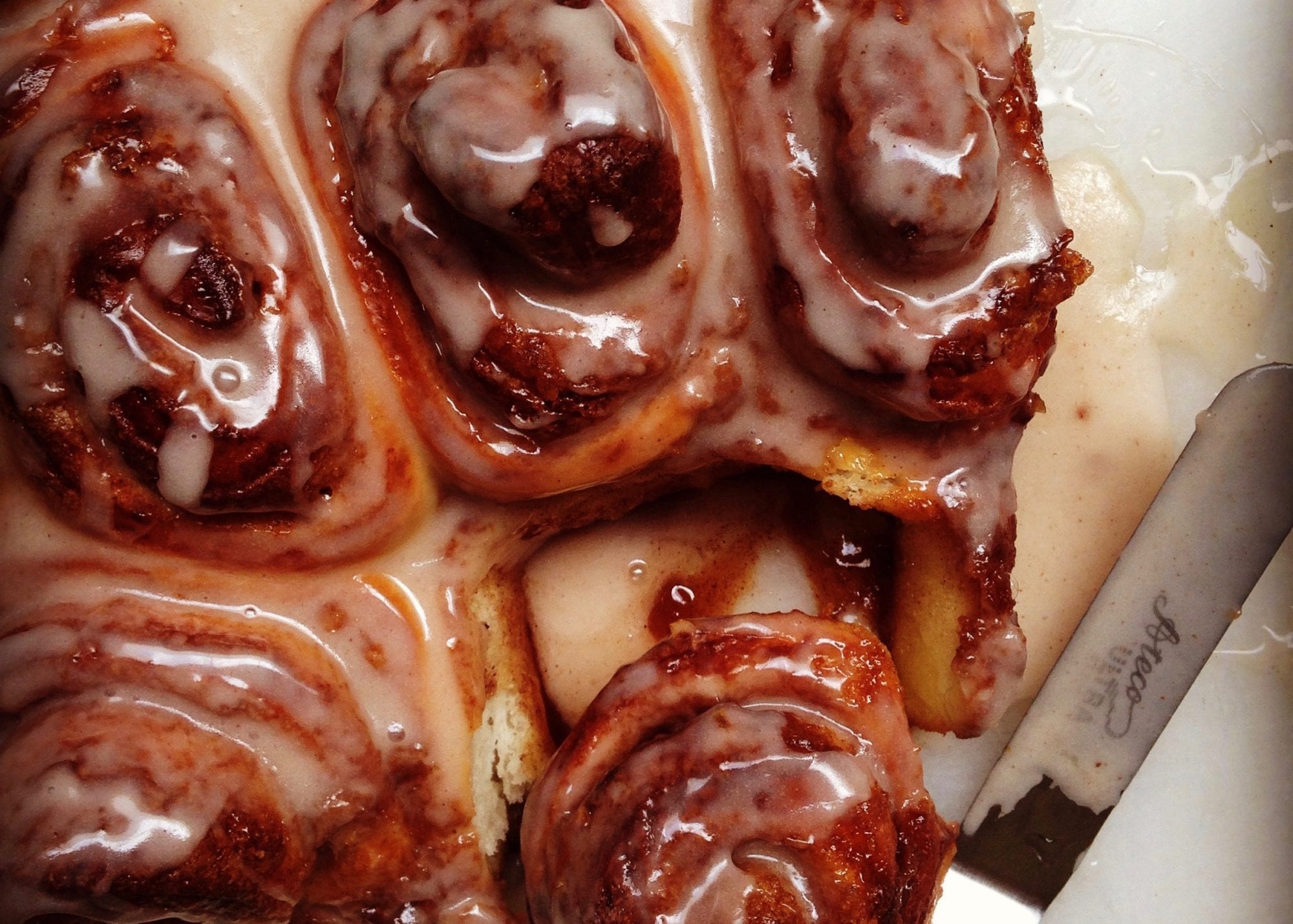 This time? the sweet needed nothing and yet the nibbles were unstoppable. Now, how is it that I came to develop these most perfect of cinnamon buns? I thought you’d never ask. I’d been thinking about cinnamon buns for a while, and not only because my 10 and 11 year old roommates are quite partial to them. In fact, ever since developing my buttermilk parker house rolls, I’d had buns on the mind, as the rolls are soft, fluffy and buttery, and I was pretty confident that they would be fantastic rolled up with cinnamon, sugar, and melted butter, and covered with a thick, sweet, cinnamon glaze. (Spoiler alert: I wasn’t wrong.) I had never made yeasted cinnamon buns before (when I worked at Baked, although we made cinnamon buns each morning from a recipe similar to the Cooks Illustrated cinnamon buns. But no longer being saddled with yeast-phobia, I knew i wanted my buns to be of the rising variety and that my parker house roll recipe would be the perfect launching pad. 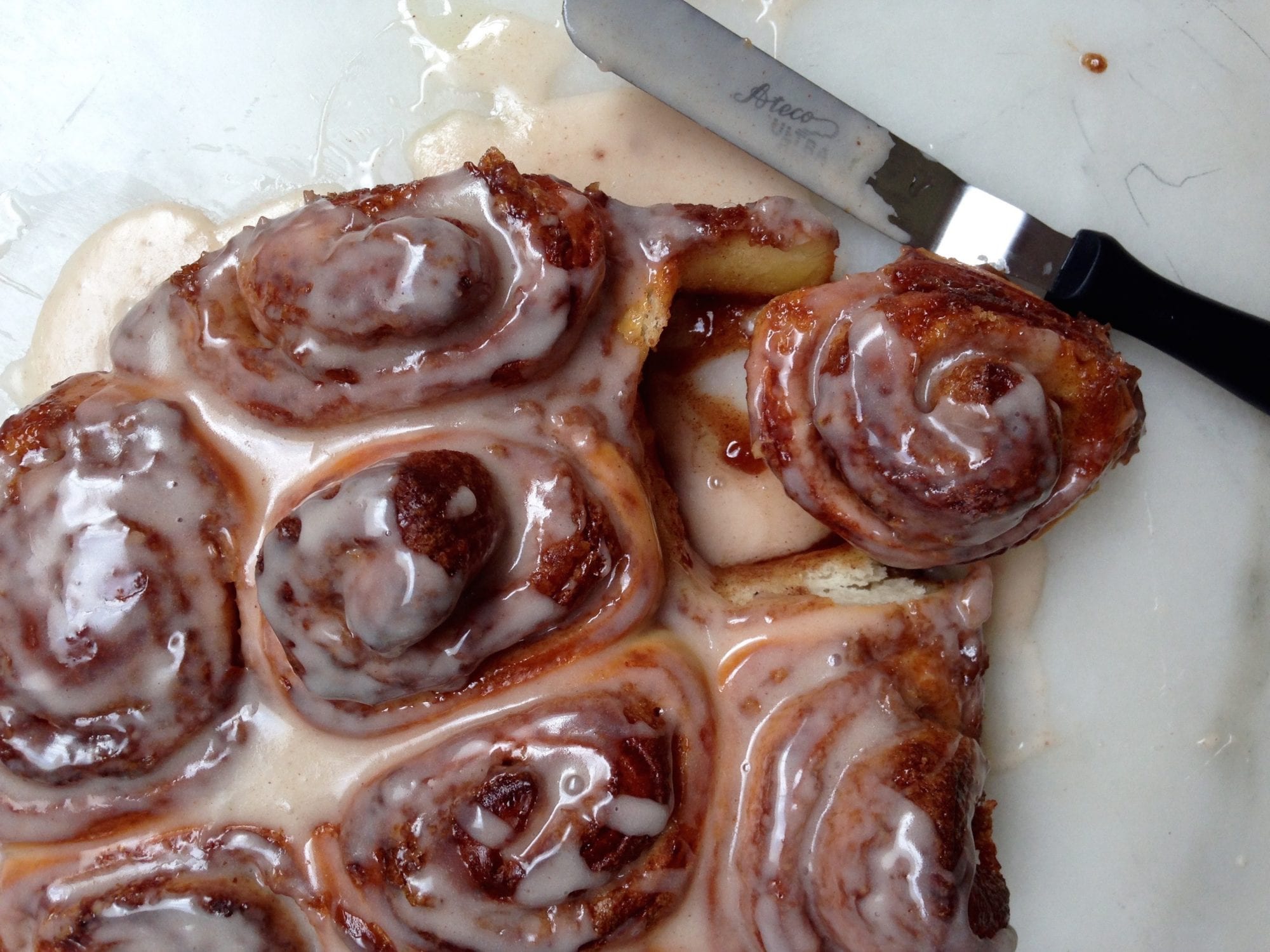 Despite the fact that I had the roll/bread component of the bun figured out, and the fact that the filling, assembling, and glazing of cinnamon buns is essentially the same the world-over, research was in order. I looked to Food Network and understood the ratio of filling to dough. Food and Wine inspired me to add cinnamon to my glaze. And Epicurious, convinced me to put nutmeg in my filling. But it was on my beloved food52 site, in a post written by the amazing Erin Mcdowell, that some cinnamon bun science was truly dropped. It was at food52 that I was motivated to add a bit of flour to my filling, to spread my filling to the edge of the dough (we never did that at Baked . . . not sure why), to leave plenty of room in the pan between buns (so that the center of the bun doesn’t rise up above the outer edges due to being squished) and to, under no uncertain terms, over-bake the buns. 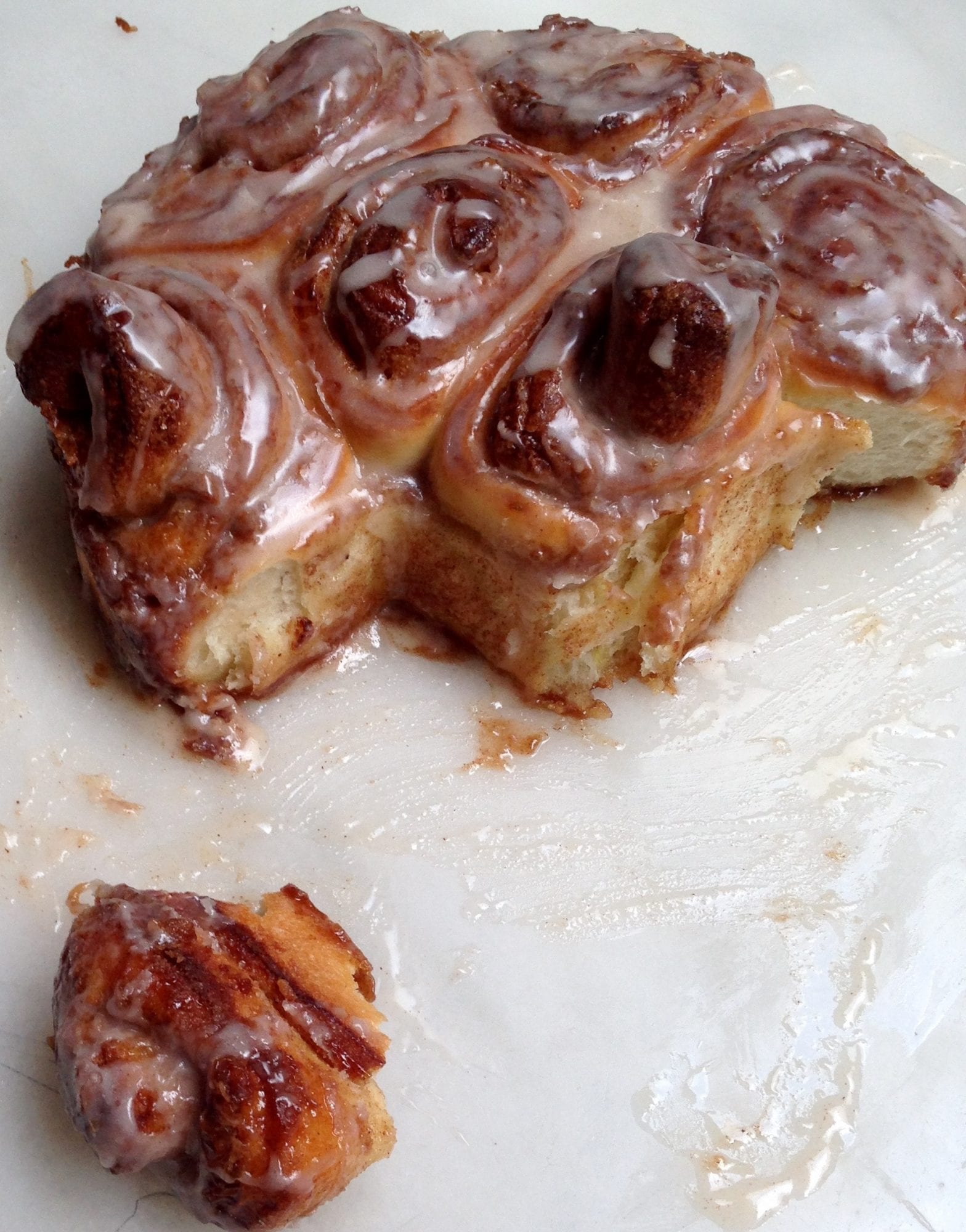 Okay, I’ll admit it, I also gave my filling a rest before spreading it due to Erin’s post, and decided on an egg wash, rather than a heavy cream one, and was kind of partial to her oven temp, too. In short, Erin’s tips were game-changing and although I hope you will make my buns, I also hope that you will read her post. Word of caution: please make my buns when you have friends around with whom to share them. I think this will preclude you from falling into the “oops i ate all 8 buns” predicament that befell me. 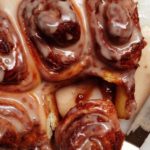 To make the dough

To make the filling

Warming the buttermilk when making the dough will help the dough rise more quickly. It is not essential, and if it is done, it should only be done til any refrigerator chill is removed. If you do not want to make all 16 buns, wrap one of the pans in plastic wrap and then a layer of tin foil before the buns' second rise, and place it in the freezer for up to one month, or in the refrigerator for up to a few days. When ready to bake, they will need longer to rise a second time (and to grow to 1 1/2 times their size), so plan accordingly.
Thanks for subscribing! Please check your inbox to confirm your subscription.
Bread, Rolls, Doughnuts & Puffs Breakfast Cinnamon

As if the parker house rolls did not sound yummy enough!
Jess, what’s next?

Thanks, K! Next up: maybe strawberry malted milkshakes with homemade strawberry ice cream . . .